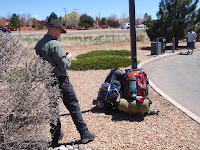 Devin and Leif picked us up at the Giant shortly after 2, and after an extended stop at Trader Joe's, we were on US-285 toward Clines Corners and I-40. Devin stopped about half way there to get the "veggie" system going, then it was thru Santa Rosa, Tucumcari, and San Jon into Texas.

Devin and Leif are both quite easy going, and fun to be around. Once we got aboard, it seemed 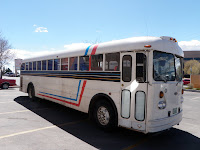 from first impressions that all of us would get along well. Devin even used one of my phrases, "liberal bourgeois" almost immediately. That should have meant next to nothing of course, but my primary concern was riding with my favorites: pretentious hippies.

The bus itself is a converted '76 Catholic School bus that has a little kitchen, and four bunks installed in the back. Beats the hell out of riding in a car, even though the top speed MAY be 65! The interesting part will be scavenging Amarillo on Tuesday for vegetable oil, which could take most of the day. The bus runs on both diesel and veggie, with the oil lasting around 300 miles to a tank...for free...using nothing but restaurant waste. Makes the hassle worth it.

There was a nice piece of comedy near Amarillo when we thought Leif was being pulled over. We 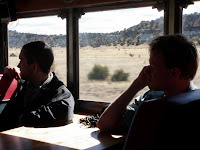 all saw flashing lights behind us, but after 10 minutes sitting on the side of I-40, realized there was no one behind us! That was amusing in and of itself, but as Chris and I were about to deposit processed coffee in the grass, a cop actually showed up thinking we had broken down. We've all heard the stereotypes regarding Texas cops, but let me partially put that to rest. He was quite nice, never ID'd anyone, and was quite interested in the bus.

Leaving Santa Fe was a bit awkward to say the least. Laina was on her way with her parents to Albuquerque when they dropped us off, and it felt quite odd saying goodbye to her with her parents as an audience. I have no idea 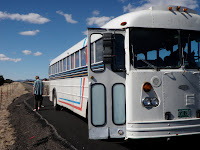 whether they know the possible extent of this trip as they have never asked, and I like to avoid the "I'm leaving your daughter here alone because..." discussion. The goodbye could have been a bit better; that is all I am saying!

The actual departure was odd too; both familiar and weird. I had no time before leaving to think myself into a frenzy, and before I really knew it we were dropped off. The fact we were riding off to terra incognita was ordinary to me; Chris and Amtrak were my exits last year. It's a bit different for Chris in having to adjust to this method! I'm quite surprised at how easy I seem to have fallen back into the patterns after 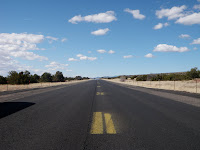 Tomorrow may bring Oklahoma, and our hosts are talking about a trip to Norman to see some people and just hang out near campus. That suits us quite well since we still seem to be afflicted with "Sooner Curiosity", and we're both making a conscious effort to de-structure ourselves; saying to hell with "plans" (ha!), expectations and schedules. Yeah, I'm anxious to see how that goes too...
Posted by Todd X at 9:38:00 PM