Monday morning's alarm never had a chance to ring, deferring instead to the ominous chimes of thunder at 5:45. The skies offered a temporary reprieve, so I hustled to pack and sprint out of the woods to the truck stop hoping to ride out Mother Nature's drama. Thus began one of my most bizarre days!

Two hours, three pots of coffee, and a steak-and-eggs breakfast later, the storms had passed Central Square, the camera, cell phone and I had a full bellies, and all were prepared for a day-long push toward Binghamton then east toward Erie & Cleveland. My hope was to find a cannonball thru Syracuse right away. When Liz pulled over (another single woman!) 10-minutes later in what appeared to be her combination commuter/farm vehicle, it seemed to be a modest uneventful 10-mile start to the day. Ninety-minutes later I was disembarking from, aside from Dennis, what may be the strangest, most uncomfortable ride I’ve had since beginning these travels in 2008!

Liz was married, in her early or mid-20’s, quite round, and already had a large flock: five kids. Once she felt assured I wasn’t a freak she relaxed, bypassed her original 10-minutes and just kept driving. And driving. Once thru Syracuse, I learned firsthand how women must often feel! Liz steadily, and without subtlety, manipulated the conversation to share that she was a "raging nymphomaniac", "addicted to pornography and the male form”, and that her husband was as "insatiable" as she. Oh, also that I should consider seeking out "work" on the Internet because, “with all the walking you do, I’m sure you’re in really good shape!” I regularly felt as though I should remind her that my eyes were “up here”. I didn't, and request that you remember that next time I'm accused of having no filter.

Liz repeatedly asked if I was uncomfortable with her steadily intensifying advances and, wanting to get as close to Binghamton as I could, I just rolled with it answering questions like, “what do you do about, you know, sex while you’re on the road? Do you just jerk off?” "Ya ever get a lot-lizard?"I laughed because, while it sounded bizarre coming from this critter, it wasn’t the first time I’d been asked that question. I  braced myself for what I assumed was the inevitable demand to watch in exchange for the ride! A demand that, thankfully, never came! But, with that question, all I could think of was Ahab and Ginger's daylong Cirque du Soleil coital-harpooning ceremony in Watertown! Some things you just cannot un-see.

When she finally figured out she was being stiff-armed, Liz quickly bored of me. In Binghamton, she took a spontaneous exit, and unceremoniously dumped me out in a Lowe’s parking lot next to US-11. I felt dirty. Used. Like was being shoved out of the car after being taken to Red Lobster and refusing to put out ! I'm a human being, goddammit. Not a wandering sex toy. Hold me.

I must admit I got a few laughs imagining the signs I could write up if I took Liz's "work" advice: "Will whack for ride." "Erect 'til Erie." "Let's bone to Boise!' Feel free to come up with your own. 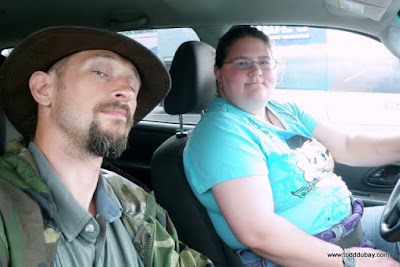 One of my fatal-flaws is laziness. It always has been, and while I try very hard to fight it, I have colossal lapses that occasionally create comical scenarios. Allow me to present Exhibit #562.

After fending off my voracious sexual predator, I was rather disoriented and misjudged the layout of Binghamton. I also underestimated its size. We had just left I-81, I was looking for I-86, and saw a sign for I-88. That’s a whole lotta 8’s! Rather than simply pulling out my map, I relied on my hazy recollections from the ride thru in 2009, lazily assumed I’d mistaken I-86 for I-88 and confidently pranced onward-- to the north then east-- following the signs to the interstate.

When I’d arrived at I-88 forty-five minutes later, there was no place to hitch and only after walking another 20-minutes down an industrial service road did I finally decide to look at my fucking map. My discovery? I had not only mistaken the interstates, but this one ended in Binghamton! It did NOT connect with I-86. In fact, I-86 (despite what Google Maps said) did NOT pass thru or even touch Binghamton. I-86 in Binghamton was a trasportational phantom! The road I needed was NY-17. The question: how the hell was I supposed to get there from here! 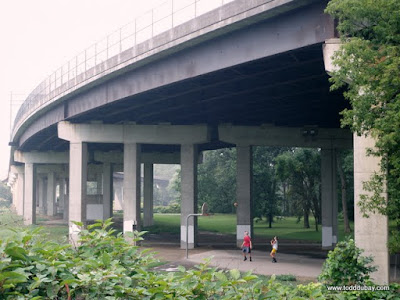 Blister McBastard, which had been doing well, was no longer doing well. It now paired painfully perfect with this little navigational abortion. And the weather was deteriorating! Downpours began as I cursed everything Binghamton and put my head down resolving to simply escape Binghamton one way or another. A couple of hours and several miles later, I had my bearings and set the proper course to my new obsession: Route 17. Incidentally, all I had needed to do at the outset was turn left instead of right when Liz let me out. It would have been obvious had I just USED the fucking map I was hauling around! That’ll piss a guy off.

Eventually, I found a place to set myself up with a sign at a busy entrance ramp back on to I-81. Busy ramps are deceiving. One would think it would be easier to catch a ride at a place like this, but that’s usually not the case--especially in cities. Three hours later, the midday rain was replaced by a blazing mid-afternoon sun, heat, and humidity, and I felt as though I’d begun to grow roots from my ass to my backpack. I needed some positive energy. I found it in the form of a couple of great kids. 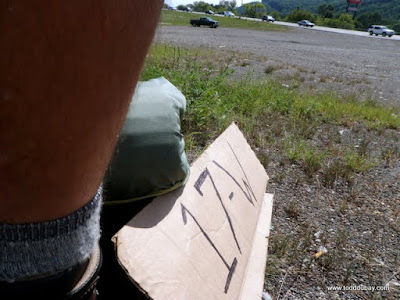 Casey & Julia were both 19, just out of school, lived a bit west of Binghamton, and heading home after signing up for community college classes. They had originally passed me then decided to return, which happens frequently and , as I’ve said before, always amazes me. I was further astonished by their spirit and hospitality. They helped me get the pack into their trunk, loaded me up with water they had on-hand in the car, and vigorously tried to determine the best spot to drop me off without taking me all the way to Elmira!


Neither Casey nor Julia seemed sure about what they wanted to do with their lives and expressed an untapped desire to “see what’s out there” despite their parents insistence that they get busy and “make something of this life.” I’m pretty sure that’s what led them to stop, and thinking of both myself and conversations I’d recently had with my contemporaries, I encouraged them to tell mom and dad to stuff it; to take their time before getting obsessed with becoming a cog in the machine. Julia, in particular, seemed fascinated by my method and philosophy of traveling, particularly after the story of Dennis and, comparing favorably to Leslie (which is tough), she reminded me once again why I love the Youth's attraction to the mystery, excitement and the possibility of life! I’m slowly accepting that, while it’s often accompanied by unavoidable ignorance--the kids have most of it right. What’s interwoven within the synthesis of mystery, excitement, and possibility is the fountain that streams what each of us need: hope. We old fucks bitterly know it on some level, but too many have let the practical “business of life” smother the very spirit that, in my not-so-humble opinion, makes life meaningful. Then, we wonder why we can’t relate to Youth and suddenly feel empty. I was happy to spend 20-minutes immersed in and reminded of that.

Route 17 finally turned into I-86 and shortly thereafter Casey and Julia dropped me off at a truck stop just west of Owego assuring me that the people out here were "stand-up" and that I’d have little trouble finding a ride. The truck stop seemed promising with lots of traffic and an adjacent Best Buy distribution center. I wasn’t too concerned as watched the sun fall from the nearby exit ramp and found a spot to bed down chuckling at the course of this day!

I had no idea, but this would be the last time I'd stealth camp for a VERY long time. If I had, I would have taken a picture of the nest! 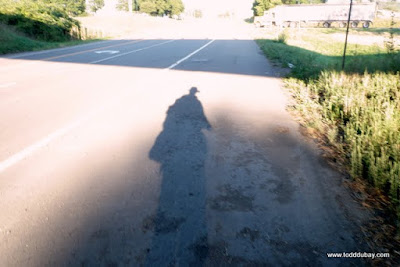