El Jefe and I finally hit the road for California's Imperial Valley in the early afternoon. Five-hours later, after leaving Quartzsite, the Colorado River, Blythe, and 20-foot cacti behind, we were treated to a stunning I-10 descent into the Imperial Valley and Indio/ Coachella, before hugging the eastern shore of the Salton Sea to the scuttled settlement of Niland... home to Slab City. 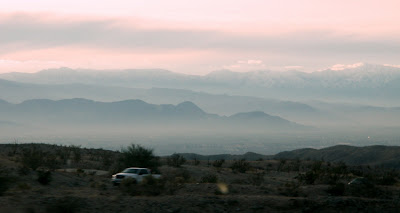 The Imperial Valley from Above


Slab City is difficult to describe to someone with no frame of reference. It's nearly impossible to explain to the institutionalized. It was futile for me to tell Jefe what to expect, since I wasn't exactly sure myself beyond common basics. Slabbers often describe it as the "last free place in Amerika." They leave the term "free" intentionally ambiguous, but I quickly learned that it's "free" in both rent and state-of-mind. It's the real, unfiltered and raw freedom of The Jungle: with a definite sense of self-responsibility/ determination. The Zoo's caretakers are absent; there's no one to tend to you, your shit, or anything. There's no one to pay to do it, either. There are no utilities. No running water. No sanitation. No amenities of any kind... unless you consider empty concrete WWII-era training-bunkers an "amenity." In the Mojave they're a luxury; ones to be arranged for and reserved!

Coming in, I knew that primarily RVers occupy this abandoned Navy base in the winter months, biding time until the weather up north becomes tolerable... and the desert turns into a 120-degree summer furnace. I also expected a large degree of old-west lawlessness and was prepared to find everything from Rainbow types to fugitives on the run. 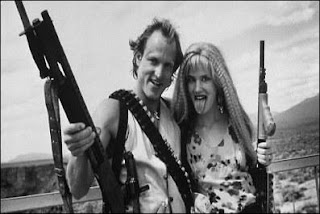 The opportunity to see this mix of half-million dollar RV's & Mickey & Mallory Knox greatly appealed to me! I was curious to see if a collection of people could coexist in an unregulated, unmonitored environment. Or, whether the "regulated monitoring"/ expectations & separateness would prove to be the source of the any "expected clash." Was the common thread here something other than collecting wealth? Was wealth even a factor at the "Last free place in Amerika?" How, or would people organize themselves? What would this relatively primal, organic community look like?

I received a text from Chris late Thursday afternoon saying he had already arrived, met some people, and was helping Leonard Knight repair Salvation Mountain which was damaged in the storms of the week before. Leonard's at least in his late 70's, has been a Slabber since 1984, and become a kind of face of Slab City because of his now-famous tribute to "God's Love" standing as the unofficial gateway. He and his "Mountain" have been in various documentaries, and Chris and I were introduced to him the same as most folks over the past few years: Into the Wild. Since Jefe and I arrived later than expected, we'd have to wait until Saturday to meet Leonard and see his folk art icon.

Jefe and I met Chris at a small music stage, and after people watching while politely enduring some really bad music, Chris guided Jefe's truck out in to the desert and a bunkers occupied by Adam & Melissa. This would be Friday's camp. Chris had met them at Salvation Mountain and if memory serves, they recruited him to help clean/ repair while he was there. In typical Chris fashion, he now obviously felt an odd sense of obligation to Leonard although to my knowledge Salvation Mountain, particularly its disrepair, had nothing to do with his visit to The Slabs. After having just written my diatribe on the Red Cross, this reeked of...something!

Adam & Melissa were from the LA area, and interesting characters; Adam and I even shared a C-grade celebrity acquaintance who switched to TV/ film after we worked in radio together. We were joined around the cozy fire by Kevin: one of the more interesting characters I've met to date and one who would recur throughout my stay. Kevin lived south of Gallup, New Mexico and was at The Slabs to essentially use his role within Social Service's to provide a buffer from the state, and to help Leonard- who by most accounts was moving deeper into the Southern Hemisphere of Sanity- after starting only near the Tropic of Capricorn! As Kevin described it, they were providing team "assisted living" to Leonard so he could stay and continue working on his Mountain. There were several people who appeared to play a role, with Kevin acting as Leonard's "right hand" until Leonard "got sick of him" after 3-months... which happened like clockwork. Kevin now operated behind the scenes helping whoever was now awaiting their own 3-month termination! 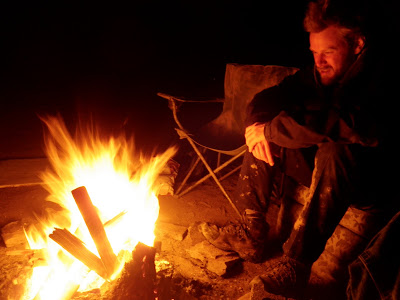 Kevin is one of those interesting road dogs that you meet every so often, but are all too rare. He reminded me a great deal of Don Dufner and Alex Sardine in that he has a McGuyveresque quality about him; he could seemingly make and DO anything! At first I found him annoying because he seemed to think himself as The Perpetual Authority. The problem with my initial assessment was... that... he... apparently... is! He had insight on sailing etc. and was a historian on the Salton Sea area, which is a fascinating story in and of itself even separate of The Slabs.

Jefe was interesting to watch as well. He was battling conflicting ideas surrounding the now-familiar-to-the-reader conflict between safety/ security & freedom. He seemed to enjoy sitting out in the desert's dirt, and I believe began to see and understand that... yes, people DO actually do this in varying degrees. As we went to bed, there was some question as to whether he would stay another day, or head back to the comforts of civilization.

The brightest full moon of the year illuminated the desert floor as El Jefe sacked out in the truck while Chris and I continued to re-acquaint after not seeing each other since 9/19; four-plus months had passed since Port Townsend. While interesting changes had taken place with each of us, some things will never change... 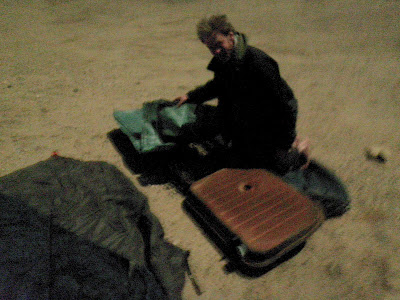