To recap once again, after 2009s travels ended with Port Townsend, I settled into last winter by starting down a path that, quite frankly, I was unprepared for. When I jabbed my pen into Don Quixote, the notion that each of us silently deal in secret, disguised and silent self-delusion, I struck a mammoth vein of fool’s gold. I certainly hit something incredibly significant, but I was also stunningly naive about what it meant, and more foolish still in believing Freud’s Dragon wouldn’t turn on me!

Unfortunately, roads such as these come with neither maps nor disclaimers attached. The paths this brand of honest introspection inadvertently illuminate can lead to dark, frightening caves concealed deep within own own psyche. These are the places we are usually afraid to visit and rationalize away, even at the lowest of our most solitary, self-loathing moments. The ones spent silently trembling in dark corners, (hopefully metaphorically) weeping while we wonder why we are who we are, or what happened to who we were supposed to be. When we ask, "Why does the reflection in the mirror never measures up to what we see in our mind’s eye?" "Why do our words never echo those whispered in a frail voice into our mind’s ear?" We beg, in Pink Floyd's quiet desperation, for answers that are only be found locked inside these deep, dark, psychological caves.

I don’t know the specific clinical definition, but it seems clear that these caves harbor what seems to amount to a flawed, terrified, neglected, naked child: “Us.” The “us” we’re too terrified to acknowledge, or even a glance toward out of the fear that someone else will see it’s there, and recognize us as the frauds we (all) really are. 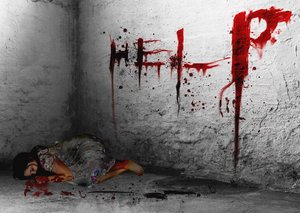 While we endlessly work building thick walls of vanity built with the materials of wit, charm, and achievement to assure "we" are kept sequestered far away from a world that just won't "understand", I believe the jokes on us. Would we, by freeing this metaphorical imprisoned self, ultimately be able to accept and embrace that we’re just as pathetic, flawed and insecure, just as fucked up, as everyone else? More importantly, I believe, would we then recognize that everyone else is secretly just as fucked up as we are? I’ve occasionally mentioned Santa Clausification, and this is it on an everyman scale. As Ray succinctly put it, “We’re all just flawed human beings”

Along with psychiatry and Madison Avenue, I’ve concluded, much to my ego's chagrin, that we’re all much more alike than we’re comfortable admitting. I’m constantly astounded by the cavalier attitude, even acute allergy, toward understanding ourselves. It's as though we're either completely engulfed and mesmerized by our own fabricated bullshit, or simply incapable of internalizing the truth.

It's becoming apparent that, like the drunk sorostitute at her first frat party, we willingly buy the jock's loaded-line that we’re "special, unique, hand-sculpted snowflakes" righteously fluttering down from on-high. We buy the bullshit because, in the mundane experience of today's world, we desperately crave a sense of meaning, and purpose. We need to feel like something more than another car stuck in traffic or generic face in the crowd. Advertisers and societal/religious leaders have long understood and exploited this. That's why the most intoxicating and dangerous delusions sold throughout the "culture" are intentionally, and maliciously, tied to our self-image.

With that in mind, perhaps these psychological doors are locked for a reason. Maybe they’re designed to be pried open as a painful rebuke in response to brazen, ignorant naiveté and presumptuous arrogance (as I believe was my case), as a reward for the incredible amount of courage usually only mustered by those hitting what we glibly refer to as “the bottom”, or most honorably (and rarely) after an incredible amount of self-observation and honest introspection. Maybe that child isn’t a prisoner after all! Perhaps he’s held in protective custody!


THE ESCAPIST VOODOO OF RELATIVISM

Of course, a sense of all this will lead to a glimpse at the gulf between who we THINK we are, who we WANT to be, and who we actually ARE. People often simply write their own convenient, subconscious  narratives, then reposition and peddle it as “their” reality. To me, it remains ridiculous to hope to justify that new-age Escapist Voodoo of multiple "realities."

J.H. Kunstler put it best, and there’s a reason I have this displayed at the top of my page: “The trouble with self-delusion, either in a person or a society, is that reality doesn’t care what anybody believes, or what story they put out. Reality doesn’t “spin.” Reality does not have a self-image problem. Reality does not yield its workings to self-esteem management.”

In varying degrees, we're still the 5-year old who thinks that if he closes his eyes, his pissed off father will disappear. The problem is that it's a silent, internal process of self-delusion; dad's not there to smack us out of it.

The standard definition of Reality from Wikipedia: "...the state of things as they actually exist, rather than as they may APPEAR or may be THOUGHT TO BE." Reality is not something that's open to redefinition on the basis of convenient, skewed perception or a whimsical, egocentric interpretation-of-choice.

There is something that should be said about the limitations and variety of our perception. I equate it to standing on the beach looking at the ocean. Individually, we each only perceive a tiny piece of an unimaginably vast sea. Yet, thousands of others--each standing hundreds or thousands of miles apart--experience other seemingly unrelated pieces of the same body of water.

To claim a personal reality, in my opinion, is equivalent in arrogance to claiming ownership of the Pacific because your toes are dangling in Monterey Bay! To take is a step further, I also believe that enlightenment--which is a DESTRUCTIVE process; the stripping away of false perceptions and untruths--alters perspective the same way a rising altitude alters your scope of vision. The higher you ascend, the more you can observe and interpret.

This was neither the first nor will it be the last time I've been forced to reevaluate and deconstruct an antiquated, suddenly obsolete self-image. The more I learn and observe, the more MY OWN defenses wither. I figured the Don Quixote path would empower me, not make me more vulnerable.

I should be thankful for that, and I am, but at the end of the day I wasn't prepared for it. I've said numerous times that there are days I'd put Don and his insights back in his bottle and return to my state of mystically ignorant bliss if I could! What I've learned and used as a tool against others has come back to feed on me. I've also come to realize, much to my dismay, that truth does NOT always come with peace & contentment. Truth is like nature in that it has no interest in your particular well-being. Truth owes us nothing but itself. Truth could care less whether or not we're prepared to handle it!

Today, there are fewer & fewer rationalizations to crouch behind. As a result and as I said before, that experience has helped me to at least grasp the philosophy of inter-connectedness. We all feed on and/or affect each other in some way.  Profound....