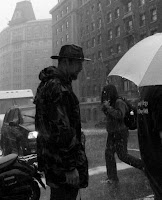 Considering how late of a night it was, I felt good as we moved out of Ingrid's place on a search for coffee and a train to midtown. Just after we said our goodbyes, the skies opened up and let loose a deluge the likes of which I had not seen in ages! This made the walk around Columbia's campus interesting, and we finally found a suitable coffee shop just as the heaviest rains began to fall.

Coffee is a wonderful thing! We had originally decided to make our way to Penn Station and head back to New Jersey, but after caffeine and walking in the rain, it seemed like wandering the streets of New York for a few hours more was the thing to do. We found our subway and eventually Times Square and the United Nations. I cannot explain why the UN was such a draw, it wasn't like we were going to take the tour or anything, but it's a place I've just wanted to visit for a number of years now. I can now cross that off the list. 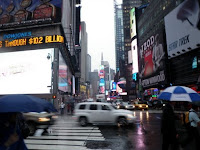 We were on the bus back to Jersey by late afternoon, and as we approached his Mom's driveway, we noticed a few deer wandering through a yard adjacent to the road. The deer closest to us had no interest in running off as we walked by. There were a couple others on that side nibbling on grass and across the road and I noticed another, younger deer navigating down the steep, wooded hill onto the asphalt trying to join his friends. He was maybe 25 yards ahead of us, and as I looked up, I saw a car speeding down the hill toward us. 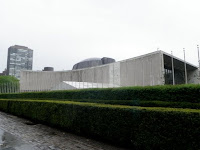 The next few seconds were in stereotypical slo mo. The deer began to run across the road, as the car came around a slight curve in the road. The driver was gabbing on his cell phone and never saw the deer, slamming it directly with the center of his grill... NEVER hitting his brakes until his front end was smashed. With a loud "thud" and the sounds of shattered fiberglass, the car sent the deer flying through the air, then along the asphalt directly toward us, before coming to rest in the brush only a matter of a few feet to our left...thanks to the curve in the road. We initially thought the carcass may actually hit us. I could see the whole thing develop, and could only say, "I didn't need to see that" while fighting the urge to implant the old man's cell phone firmly, and sideways, up his ass. There was no reason for him not to see the deer in time. His phone call was obviously more important than looking down the road.

Being sensitive to such sudden events, seeing that deer annihilated created distinct reactions specific to our different personalities. For Chris, it seemed to be a possibly ominous foreshadowing of events as they related to him or us. For me, it was an instant, disturbing reminder of something that had happened in Baton Rouge at the end of my Carnie Adventure in 2008.

I had been with the carnivals for about 2-weeks by then and this particular Sunday evening, I had been playing with a kitten that someone had brought along. A few minutes later someone sat on the front end of a trailer. The added weight caused it to tip on its wheels. Unbeknown to him, this kitten was sitting beneath the trailer. The frame landed directly on top of her back- snapping her spine. The last straw was one of the degenerates spewing the machismo filled "Well, time to snap its neck!" With my affinity for cats, at that moment I wanted to hurt him more than I ever wanted to hurt a person. I instead put my efforts into trying to convince anyone with a vehicle to take her to a vet. That failed. I was on a bus 3-hours later.


Perhaps I am a bit overly sensitive to energy as some have suggested, but it was only later that I realized that the cat was a serving as a brutal metaphor for other things that I had sensed there. It seems that whenever something positive was introduced, it was "crushed". I had seen it with a few people who were obviously there because they were searching for something. Trying to get that "something unexplainable" to take root only to have the negativity of the place suffocate it. That happened with my Chickasha friend, Jimmy. He had led the Easter Sunday Indian ritual outlined on my other blog. I learned when I returned home that someone had beaten him up shortly after I left.

My sense of the deer experience was that it was time for me to exit New York, and I was now grateful that I had my bus ticket for Monday. What solidified this notion was Musty. His witty reaction to our anecdotes: "Is it dead? Good, one less deer in the world." His primary concern: his lawn. Regardless of the fact that he owns property in their habitat, he believes that his deed trumps any sort of natural law or obligation to balance. They should all be dead because they create what he perceives as an "inconvenience!" Not that he is in the minority, of course. But, is it any wonder that we are where we are as a species if the prevailing attitude is that wealth, property, or even simple convenience dictates supreme law, and another's right to exist? Sorry, but that's unsustainable.

After Musty's commentary, I was reminded of his theory about how "evil" will never have any problem "killing good." I laughed at the obvious irony! Since he was happy to arbitrarily kill these creatures simply because he had judged them as "pests", I wondered (at great length) as to how he'd define "good & evil" and where he'd fall on an authentic scale. Ahh, these annoying "abstract" concepts like good and evil! I see no "empirical proof" that, in the grand scheme of things, YOU yourself are "good?" In fairness, that's an inventory many of us could stand taking, especially when expanding the idea beyond an isolated incident in New Jersey. I keep hearing the conversations with Eric back in Denver about coyotes and prairie dogs...

Regardless, this was pretty much the end of my interactions with Musty other than the polite, obligatory, superficial small talk.

All considered, I was happy to make it an early night. Chris' sister, Wendie, was flying in from Seattle the next day to spend Mother's Day weekend with Chris and Mary. I had been looking forward to meeting her, curious to see if she'd be likely to play a significant role later on.
Posted by Todd X at 12:33:00 AM