The pace of things, while not apparent on the surface, is quickly accelerating.

Upon my return from Denver, I discovered that the community medical clinic where I am having my dental work done is in the vortex of the state budget crisis. On March 1, they tripled the cost of crowns that are the finishing touches on a typical root canal. Since I need TWO of them, it's obvious I will not have these done; at least not to completion. They finished the filling work last week, so now I have to decide if I get the root canals done sans- crowns, or let them go until they actually start to hurt, which could be a month or a year. I have 2 appointments scheduled between now and 4/6… we’ll see. They're in the midst of staff/ hour cuts, and may possibly even close. In that light, my tooth problems seem marginal, eh?

Booger also now has an big brother who is trying to steal his glory. 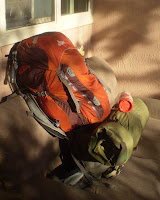 Meet Elmo. I picked him up at REI (partially out of boredom and...) because I became concerned that Booger may in fact be a bit small. After loading him with food, Booger weighed in at 52 pounds, a scant three pounds below his comfort rating. This was with a minimalist of warm clothing, and not including a full compliment of water.

Elmo is the same model I used last year, a Gregory Palisade, and nearly the same size as Blue. (Listed @ ci: Fucking Huge) Plus, his beefier suspension system rates at 70#. The last week has been packing, repacking, weighing, and trying out both packs. I need to decide by the end of the week what to do, but it’s looking more and more like Booger may be wiped on the backseat of oblivion…

The beautiful thing about REI is that they have a no- questions return/ exchange policy; even a year after purchase. I legitimately tried the “buy local” bullshit, which now comes complete with the desperate retailer-in-a-depression guilt- trip: ”We’re in this together, your tax dollars support the community!” After haggling at the “local” shop to finally get the “three days they would graciously give me to decide” on an Osprey Argon, I decided that I was getting the equivalent of "jack shit" for having my tax dollars stay in the “community”. I would rather spend money where they practice, you know, customer service rather than “You owe it to us!” salesmanship. Progressive Pretension again; these douchebags are their own worst enemy. I will not be too devastated when REI finally crushes them. They are on their own. Like the rest of us.

Chris had some slight dental drama of his own, being unable to get an appointment scheduled for his filling in Denver, so he set one here for April 7th. That makes things a bit more complete in the sense that we now have a hard date for him to be in New Mexico. All that was know for sure prior to that was he was done at the coffee shop 3/27, and out of his apartment 3/31. Now we could begin the dialogue about when we could leave Santa Fe, and have it mean something. We tentatively set 4/11 as the latest we would be on the road, but as usual, the fates has shown the folly of “planning” …
Posted by Todd X at 7:31:00 PM