I did indeed make the trip to Saturday.

We decided that it would be worthwhile for me to arrive Saturday night so we could then go to a “Post-Petroleum” survivalist class Sunday morning. I had nothing going on until my next dental appointment, 10-days out, so planned on staying in Denver through the week so we could work on business cards, the blog, and also get with Eric. The thought began to set on the drive up I-25 that things are REALLY going to change VERY soon, and this would most likely be my last offhanded trip to Denver. Chris is leaving The Friary on 4/1... and that as they say, is that. He's homeless. And we're underway. That little Capital Hill apartment has seen it's share, that's for sure.

As usual, Chris & I sat up until 2am or so chatting THEN remembered that Daylight Savings was moving the clocks ahead an hour making for a short night’s sleep.

We were up and to the class, held in a parking lot in an industrial/Mad Max-ish part of town, by . The instructor, Robert, was showing how to make and use fire bows, which I believe is a Native American technique for building fires. You shape the wood pieces, tie string around the bow and use it to create friction ultimately building a fire without any sort of combustible fuel. Useful! That’s also required learning for some Marine survival training. While I never got it actually burning, it was easier than I had imagined. We at least managed to get some smoke.

There were only three of us there, a 20-something girl named Layla in addition to Chris and me, so we had a good opportunity to bat ideas around. Robert mentioned possibly taking a “field trip” into the mountains to focus on hunting & fishing, which obviously appealed to us. Anything to cut food expenses. These classes are held every Sunday and it seemed like a great idea to stick around long enough, if possible, to get another one in before my March 17th dental appointment in .

Robert is an interesting person who has a distinct “edge” about him. I sensed that we would get along quite well, to a point, but that we’d likely clash eventually. We are alike in many ways; the same ways that may make our differences clash, but that's not necessarily a bad thing. He is planning to hit the road himself in the spring, and I would be interested to see what happens to him.

The weather was incredible, near 70 and sunny by the time we were done with the class at . REI was nearby and I wanted to see if the Denver Flagship’s shoe selection was any better than ’s, and Chris wanted to wrap up a few loose ends of his own. I am considering buying the O.R. Alpine Bivy that Chris has and that I had borrowed last summer.

My military surplus bivy is a bit… creepy. It has no bug netting, and after the spider den in , and considering we are going east where there actually ARE mosquitoes, I think it might be wise to consider a switch. There are pros and cons to each, and after 20-minutes of making no decisional progress, I decided to stick with what I have until after Monday night’s overnight field test.

Chris wound up with a magnesium flint combo and mosquito netting, and I discovered that REI was finally stocking the shoe inserts I had bought last year in . That pissed me off! Where the hell were they 2-months ago… before I spent $40 trying to replicate the fucking things? I bought them anyhow…of course complaining the whole time. The shoe selection was rather pathetic—at least compared to what I expected.

Chris had to work at , and I was exhausted despite the weather. We got back to The Friary, ate some oatmeal and I crashed right after he left. I’d hoped to spend some time continuing the “getting to know you” process with my sister, Michelle, via IM and getting ahold of Eric, but I slept for four hours! When I finally woke up at , I was quite perturbed. I also figured I would now be up all night...

To save time, I unpacked everything I had brought from New Mexico, mostly clothes and 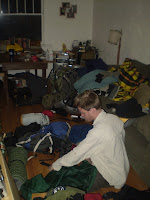 tools, so that we could do a brainstorm and decide what we needed and did not. This is a rather important process obviously, and we had been talking about doing this since early winter. Once he got home, it went very well, and Chris decided to take the Kelty backpack that I had bought on eBay. It actually is quite a good pack… and huge! Vern Troyer could hitch a ride! 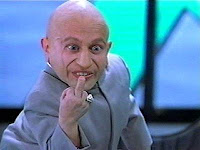 After a few hours (and a huge mess), we had the
packs ready to go. It felt good to go thru that process
again…and for real! We got to bed around 2 or 3, with no
real plan for the next day… figuring we’d wing it.
Posted by Todd X at 3:34:00 PM