Like a boat, one of the most important things when backpacking is naming your pack. Chris had named his “Rommelton” and “Patches” during his cross- country, but 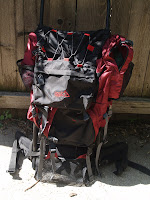 I had neglected naming the Gregory I used last summer…seemingly content with “Heavy Fucker”. Ironically, my old Coleman external frame even has a name: “Molly.” I bought her in , just a few blocks from “Unsinkable” Molly Brown’s house, and she seems to stick around when everything else goes, just like Molly on the Titanic.

Before Chris had decided to use the Kelty, he was tinkering 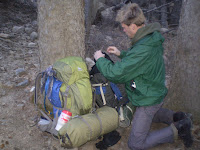 with an army surplus pack he dubbed “Che.” I liked that! While not willing to go with the obvious “Fidel”, at least for the pack, I had tentatively decided on “Raul.” With Chris now using “Ol’ Blue” (the Kelty), I needed a new name.

When I bought my new pack I thought the
coloring would be quite a bit darker than it actually is; it is in fact blatantly snot green. Snot green marketed as “bamboo.”

Now, rarely do I crack myself up. However, I confess when I saw the
“Revenge of the Nerds”character in my head I nearly drove off Colfax. “Booger” it is. “Booger” & "Ol’ Blue.”

After being up late, we slept late. We had a vague idea of places to do the overnight test and decided just to drive somewhere rather than the original “plan” of loading up and walking. Time was now NOT on our side, and we both know we can walk.

is actually IN Denver, but you would never know it once you get there. I know from my “bike tour” that there are plenty of places to stealth inside, and that we would not be hassled at all. The temperature was 30-degrees cooler than Sunday, hovering around 40 and windy. As I told Chris, I really have NOTHING to prove to myself by needlessly freezing my ass off. Considering there was snow in the forecast, at least with the car, I could take extra clothes if needed! If you are unfamiliar with how I feel about the cold…hang around for a while.

With that in mind, we finally got out of the house at around 1:00 or so, went to Chris’s bank, then to King Sooper’s to get some experimental food…including jars of baby food.

It is CHEAP and full of all the nutrients that these little monkeys need to sprout efficiently. Big monkeys can use it too. We also combined ideas, with Chris suggesting Hamburger Helper, of course without the hamburger. The plan was to return to The Friary to Ziploc some oatmeal, which is apparently going to be our staple. AND we were eager to try out a brass, alcohol stove that my friend Steve had sent from . I had NO idea how to use it until we fired it up Sunday night. HOLY CRAP! It boiled a pot of water in something like two minutes! AND alcohol is a HELL of a lot cheaper than fuel canisters for my MSR Whisperlite. Steve ol’ pal, you saved us a ton of money. Thanks!

You would realize our geekitude had you seen our reaction to that little piece of burning brass. Thank God, there is no physical evidence of it.

After King Sooper's, it was off to his coffee shop to caffeine up when my phone rang. It was the dentist.

I had asked them to put me on the cancellation list hoping to expedite the appointments I needed for fillings and root canals. Even getting ONE squeezed in would potentially get me on the road 2-3 weeks quicker. I knew that there was a slight chance I would have to bug out of early, but it was worth that risk and the hassle if it happened.

If I wanted that appointment, I had to be in by the next day (Tuesday). I snatched it up. That instantly changed things. Not only the trip but also the overall timescale. As I contemplated the possibilities, it seemed more and more plausible that rather than late April, or May, I may indeed be on the road close to the beginning of next month. There is nothing to base that on, other than one canceled appointment, but I mentioned that I still had a rather strong feeling that I would be out there soon.

Time for a revision of the immediate: overnight now was not feasible. FIELD TRIP! I suggested that we head out of the city and go east… trying to avoid my nemesis: COLD! I hate the cold, remember? Chris was pretty set on getting into the mountains though, and honestly that sounded good to me too since I had not been up there in a couple years.

We quickly decided to head to one of my favorite spots, near Guanella Pass on US-285. Laina and I had been camping there, and I love the seclusion. There is a campground to park the car and nothing else but Three Mile Creek.

It was close to when we got on the road toward Bailey, and it’s about 80-miles one way. With daylight savings however, we had an extra hour to play with, and plenty of time if it was just a dry run.It felt great to get up that way again, and Chris enjoyed getting out of the urban sprawl into the mountains that have been calling him.

We found the campground, gathered our packs, and headed up the dirt road 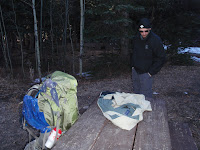 that connects 285 with I-70 and 25-miles to the north. That was a remarkable feeling. Long overdue. It was as though all was right in the universe again; the pack was on and I was out in the woods looking for a place to sleep. There was that distinct and familiar sense of honest perspective. It was also the first steps Chris and I had taken 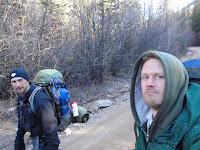 together, despite the common interest and our own experiences. I still find it ironic that this was also a true test drive for the new two person dynamic!

It was probably in the low-mid 30’s at the higher elevation, and there was still snow where the shadows fall in late afternoon. 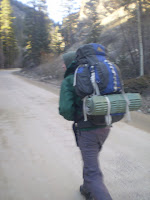 Suddenly, the cold didn’t bother me. Odd, eh?!? We began to revive our stealth camping senses again, and checked out places that we “would possibly use” if we were actually out there. One was a rocky overhang that was almost like a cave into the ridge that would shield us from falling rock. Others had obviously had the same idea judging by the tin cans and smoke stained rock.

After perhaps another hundred yards we found a little 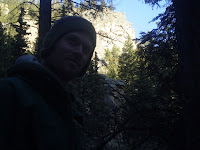 clearing next to the river that was also beneath road level, thanks to the river. No way would ANYONE see us there unless we built a bonfire. That was not on the agenda.

As we began to climb down, I failed to notice some ice from prior snowmelt, and fell on my ass and, more importantly, my wrist. A friendly reminder that 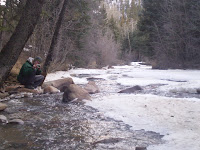 "Yes, Todd, you need to pay attention to what the hell you’re doing! Remember?” The funny thing? My ass or wrist wasn’t my tumbling concern; getting Booger dirty was! Pathetic.

From there, it was fun and games. We dug out the bivys & sleeping bags to test what kind of clearing 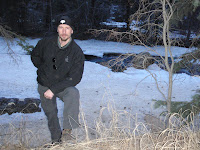 and spacing we would need as compared to a tent. We also got back in the habit of getting pictures, and were ultimately, it seems to me, just ENJOYING OURSELVES. After I climbed inside the bivy (who needs a name, but I refuse to type, "I got inside Fidel.”), a sense of joy came over me. I believe I may have had a goofy permagrin 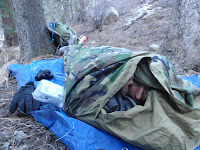 plastered to my face, and judging by the pictures, I was right. It was a sense of “home.” Hard to explain that. We contemplated experimenting with Chris’s 8x10 tarp, but in the end, we were sort of simply (and usefully) playing around. We had taken our little red wagons to the park. When it began to get dark, we took our toys and went home.

Booger and Blue both performed well, and the bivys were just fine. After 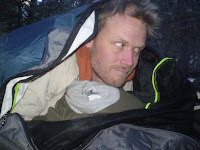 actually getting it dirty, I all but decided to keep it rather than spend the money on the Alpine. I have mosquito netting, and so does Chris. As long as there are no leaks, it will be fine. That is my thought process…today anyhow.

Then it was back to the car and back to quite 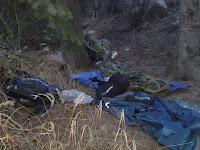 happy about things. I chuckled at the rush of energy I got just by leaving the city. I also realized that this little excursion made this…REAL. We have been talking and planning …just talking and planning…for months. Now it was no longer abstract. It was happening, and goddammit, it was GOOD!

We watched the BBC documentary “Century of the Self” which is about the psychology of advertising and propaganda (and should be seen by everyone!) when we got back, and then it was off to couch. I set the alarm for to get back to .