This bike trip is in reality almost completely improvised, as the title suggests. At the outset, I'll be riding with my young friend Bruno, whom I met on Couchsurfing. He's riding right now from Montreal toward Vancouver. The tentative plan is for me to meet him somewhere west of Seattle, turn the bikes south and ride. That's pretty much it. I've added an update on Bruno's progress as well because the story of his journey west is sure to become interesting, especially about the time he approaches the Canadian Rockies in October! There's a possibility, likelihood even, that my trip will begin here in Denver.

I have another friend, Sarah, who's teaching English in Tampico, Mexico who has invited us to 'stop by'! I would love to! She's an adventurist at heart, and I suspect she's feeling a bit chained to her j-o-b! The Tampico decision will be made WAY down the road.

The duration of this trip will be up to 5 1/2 months. Depending, of course, on money. To conserve cash and to adhere to the philosophical foundation I've resolved to avoid hotels and campgrounds. My intention is to stealth camp and Couchsurf almost exclusively. Relearn self- reliance and sharpen my survival instincts to something more than a sprint to Motel 6 & McDonald's only to waste money in an effort to avoid adversity. I'm not so foolish as to believe that there will be NO hotels or McDonald's, but no more than are absolutely necessary!

I'd love to hear from anyone and everyone, and I'll do my best to update as much as possible. I intend to keep a written daily-journal, and will copy directly from that when the internet presents itself. Sign the damn guestbook too!


You know the look, don't you.

The one you're guaranteed whenever you tell someone you're going on an extended, self-sustained bike trip...especially LEAVING in October! They can't quite figure out WHY someone would WILLINGLY subject themselves to effort at the risk of ANYTHING resembling inconvenience! They cannot fathom any other way of life outside of the pursuit of comfort, and when they see or hear someone running directly against that current in pursuit of something, ANYTHING, greater than Consumerism, you can actually physically SEE their programming short circuit!

I love that look!

This is a bike trip that's been, in the grand scheme of things, more than two years in the making, without me realizing it until April! I've never been a person who's ever been satisfied with anything. No matter what goal I'd set for myself, what new toy I'd buy, or whatever new location I'd find myself living in, the results are always the same: dissatisfaction. I found myself, as Pink Floyd says "waiting for someone or something to show me the way". It never occurred to me that the 'way' is lurking inside. Actually...it doesn't lurk. It screams. I'm just learning to understand it.

In 2004, I decided, out of desperation, to take a very close look inside & ask some very raw questions of myself and to give even more brutal answers. While this project is far from complete, I've come to some very startling, by institutional standards, realizations. That the less I have, and the less I want, the happier I am. The less I feel the need to possess, the closer to absolute freedom I feel. I believe it's true that your 'stuff', even a house, car, job, end up owning you. To what end?

I've also come to realize that the deeper I try to explain these things the less they make sense!

Suffice it to say that I have some very definite ideas about my path to some sense of happiness and purpose and none of them involve new cars, mortgages, or climbing a 'ladder'! Each person has their own path and their own voice. Mine has brought me here. The bike trip is symbolic of a transition from philosophy & ideas to action & experience. For those of you who know the name and story of Heinze Stucke, you'll have a good chance to understand. Enough from the soapbox.

I've decided to add this at the outset, to give a better understanding of what it is I hope to accomplish with this trip, since these 'goals' are far from 'mileage', or 'destinations'.

First and foremost I want to reconcile philosophy and action. I've spent two years complaining about the state of affairs and expectations of the "American Dream". It's apparent that from the earliest days, Americans are indoctrinated into a system that puts a premium on conformity and finding a 'place' in the economic machine, with the promise that monetary and vocational 'success' will lead to fulfillment. The formula to be followed is beaten into our heads by the educational system, politicians, religions, and of course (and most insidious of all) the MEDIA. After spending roughly 10 years in radio, and observing how the media, and advertising in particular, operate I've become hyper-sensitive to the way the public is manipulated and kept 'stupid' as a means for these outlets to garner ratings and advertising revenue. Once I tuned into that, saw it operate from the inside, and asked myself if I have ANY sense of idealism...well, it's impossible to just "play along!"

Most Americans in my not-so-humble opinion, and to paraphrase John Lennon, are kept 'doped by religion, sex, and TV'. But yet, "are still fucking peasants" in the grand scheme. Blinded by consumerism and chasing the next financial trophy to gain some sense of status, purpose and self-worth, they have no concept of the fact that they are indeed individuals beyond becoming a reality TV star or creating a page on MySpace. People are not bound or beholden to any state or system, and while Americans are full of the "Freedom Jingoism", they forget that 'liberty' isn't defined by the ability to buy a new car, house, or TV (on credit), but to be the master of their own destiny. WHATEVER that destiny may be.

One of my favorite aspects of children is the most annoying to many parents. The tendency to ask "Why? Why? Why?"! Eventually the answer becomes "Because I said so!!" People should NEVER stop asking why, and never be content until the answers are found. One of my favorite examples of 'why' that is happened at work. A friend of mine was getting married, and said "Aren't you supposed to spend three month's salary on the ring?" I asked him "why?". His response was...and I'm not kidding...was that he heard that on a jewelery commercial!! Of course I protested, and asked why he should feel obligated to spend what a JEWELER said he should! "I don't know..that's what you're supposed to do!!" This is the time when 'the look' hits; he couldn't answer that because he'd been conditioned to accept it. "They" said so. People get so pissed off when you press them on this. It's that area of dirty truth, hidden under the floorboards of a musty house. The place no one wants to go for fear of what they may find. It's easier to close the eyes, accept it and avoid the fight.

I wont just 'accept' anything any longer.

That's all fine and great except for one thing: how do you put these ideals into practice??? That's the primary goal of this bike trip. More self-reliance, and less dependence on a system that, for me, corrupt. People in the 21st century cannot live completely independently, however, you can choose how you utilize the system. I've decided to try to figure out a way to work when & how I choose, but only to support myself and allow me to explore myself and my world. My initial idea was hiking; biking is much more efficient because I can cover much more ground.

In the short term, I want to relearn, and embrace my survival instincts. I also want to learn to just 'let go' to a greater degree, with no itinerary or 'plan' other than riding. I want persevere. Eliminate fear and the resulting dependency. And, I want to come back to Denver at the end with a clearer idea of the next step, which will, hopefully, be of a much greater scale than this one. Or knowing that I was completely full of hot air!

I know that some of this tends to offend & annoy some people, if that's the case, I apologize. But bear in mind that I'm not trying to convince anyone of an ideology, simply to develop and practice my own. We all have a path and reasons; these are mine!

After the trip, I'll refer to this and see how well I did! 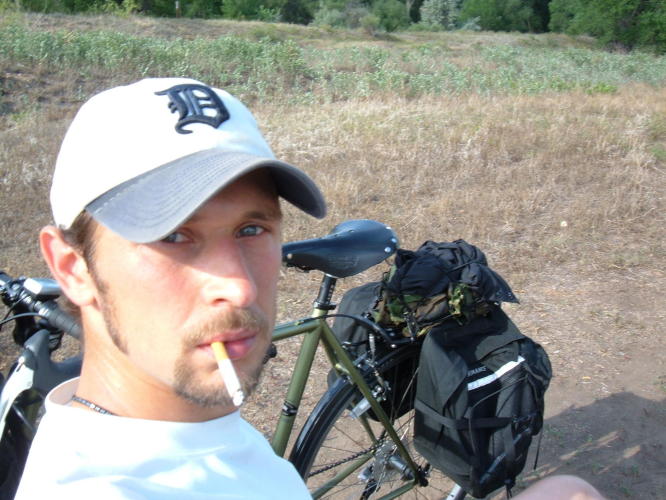