All-in-all, I'm rather surprised at how smoothly the preparation has gone. I decided to do this sometime back in April, and from the outset it's been a matter of forcing myself to step outside of all the comfort zones I'd created over time. Some people believe that as we get older, we become prisoners of our own environment, and while I don't consider 36 'old', I can definitely see the tendency in myself.

Believe it or not, the first challenge was even getting on the bike! I hadn't ridden in probably 20 years until I bought my little Peugeot 'touring' bike this Spring. I was actually afraid of trying to ride it in the city because, although I enjoyed biking immensely as a child, I was scared that the skills would have left me, or that the urban traffic would be overwhelming. I remember the first trip up Clayton St. that night, and the sense of accomplishment over riding 2 blocks! 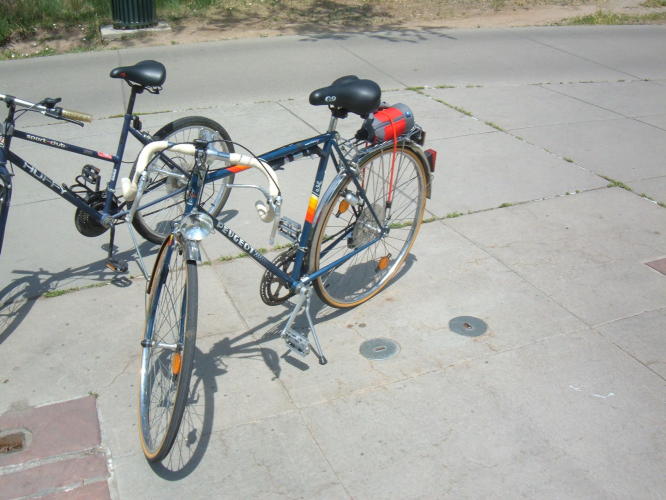 
That theme of facing fear and cemented notions has become the pervasive one over the past few months, and continue today; that's what this section will probably entail the most.

The next hurdle I faced, after I got comfortable riding around the neighborhood, was commuting to work at the ballpark. I remember that day clearly, because it taught me something valuable. The first day I rode the 3 miles to the stadium and back, it happened to be raining and I was contemplating walking. I got so disgusted with myself for looking for the easy and 'safe' way out, that I told myself "How the **** can you ever expect to do any kind of tour, if you can't even ride three miles in the bleeping rain?!"

From that point on, I began to vigorously fight these urges to seek out the familiar and the 'safe'. The mind can be a funny thing, and it makes me laugh to think how such a trivial accomplishment can be so important!

We moved at the beginning of July, and I also purchased the 520 at that time. The next challenge?? Ready for another laugh? Getting on the 520! I'd grown used to my Trek Navigator, and was concerned about riding a bike with the clipless pedals wearing regular shoes! Brilliant! Once I got on that bike though, and remembering the 'lessons' from earlier in the Summer, I began to really start exploring the bike paths around Denver. Some of the best times I've had in this city have been the little day trips on the bike, taking pictures and seeing Denver from new perspectives.

Clipless pedals! That was another one! I fought the realization that I really should use them, because... say it with me now; you know the theme... I 'wasn't comfortable' trying them. I forced myself to by a pair of Cannondale shoes, and it took me at least 3 weeks to get them on my feet and on the bike. I was sure I'd be falling in the street somewhere! Guess what. No problem. Another theme! I love them now, and missed them when I commuted to work.

There are still hurdles to overcome, but they're minor and fear- based. I'm unsure how the stealth camping will work out, but I'll figure that out. I'm rather intimidated by the idea of riding on busy roads, but I'll suck it up. And there are times when I'll step out on the porch when it's cold and ask "What in the hell are you thinking!" The voice of self- doubt is gradually becoming quieter & eventually he'll be replaced by something else.

Even now, before the trip has even begun, this process has worked wonders for me personally. It's helped me to bust out of the mental prison of habit, and re- introduced me to the wonders of discovery; part of my psyche that's been a bit ignored. Youth is indeed sometimes wasted on the young!
Posted by Todd X at 10:01:00 AM