Getting up at 10:00 after the late night was rough, but once I was packed and had dropped off the extra stuff at my mother's, we were on our way to Coldwater...a good hour later than "planned."

The idea was to meet up with Mike at the familiar Big Boy around two or three o'clock. This would provide us with a few hours to eat, drink coffee, and plot. We said our goodbyes to Bob in the parking lot, and as Chris put it, let him get back to his normal life. I had spent a lot of time with him over the past month, and I remember thinking that it was nice to still have a friend or two like that! Thanks for everything, Bobby.

After we had stuffed ourselves on burgers and coffee, we moved outside and were talking about how neat it would be to hitch a plane ride, when I realized that I actually had a friend who owns a plane and reportedly likes taking people up for rides! I instantly envisioned an extravagant hop across Lake Michigan, or even a simpler one from Kalamazoo to South Bend. I was quickly on the phone to explore possibilities. Through these discussions it also became apparent that staying in Michigan may be preferable to northern Indiana, not wanting to deal with toll roads. I decided that if all went well, I'd ask Mike if we could ride with him back toward his home in Charlotte, since Battle Creek and I-94 were on his way back.

Mike arrived around 3:30 and snuck up on me! I had become rather oblivious to my surroundings by then and was looking for a different car than the one he had driven, so when I looked over and saw a silver sedan pull up I was a bit shocked when I recognized him. This took me back to meeting Shelly for the first time at the end of May. There's no protocol for these situations; no prescribed dose of pleasantries to administer when you meet a brother for the first time. I'm sure he was experiencing the same things as we shook hands, hugged, and looked each other in the eye for the first time.

Mike is shorter and a bit stockier than I, but then again so is the poster child for Feed The Children.

He reminded me of myself when I was living in Denver. And eating. I had seen pictures and at various times had felt like I was looking at my younger self, when I wasn't shaving my head. He seemed to be a low key, honest, up-front person. I sensed no bullshit about him and, as we all know by now, I respect that. Standing in this parking lot were two brothers who, up until less than 48-hours ago, had been just abstract ideas to each other. We were now real. This was VERY cool! There was a good vibe and I was glad for it.

brought his 9-year old daughter, Ally, and her mother Bobbie with him too. Ally is a beautiful, blonde, bundle of energy! I knew to expect that she'd be quite shy at first, but that didn't last at all. Pretty soon she was resuming her task: relentlessly tormenting her mother. It was obvious from the start that Mike adores his little girl, and has no trouble showing it.

We spent an unexpectedly, almost inappropriately long time in the parking lot smoking, chatting, and recollecting before we finally went inside so they could eat. 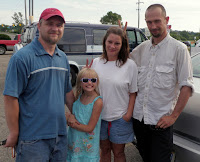 The story telling and questions continued as we learned more about each other and our pasts. Mike has a creative streak in him, just as Shelly does. He loves restoring cars and works at a body shop. I also was horrified to learn that he had nearly been killed not too long ago, barely getting out of the way yet having his right ankle essentially shattered by falling steel . I thought to myself, "What if that had happened? Why the hell are we in this situation again?"

The original "plan" (ha!) had been for Mike to drop us off in Angola, IN where he would pick up 4th of July fireworks for his family, then head home. I submitted my revised Battle Creek proposal after I figured out we were getting along well, and he agreed. So it was on from Coldwater to Angola for munitions and cigarette shopping. The conversations continued as we made the 20-minute drive down I-69 and the longer we hung out, the more we seemed to have to say and were at ease. No pretension; no bullshit. "Why the hell are we in this situation again?"

Fireworks and cigarettes in tow, it was time for the 40-minute drive back north, toward Battle Creek and the Te-khi truck stop on I-94. I wasn't exactly sure what our next move would be, but I had friends in the area and even if we were stuck, there were ample places to hitch and/or camp. More importantly, it wasn't far out of Mike's way. 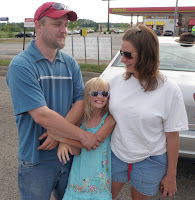 He said repeatedly that he felt "weird" about just dropping us there. I did my best to reassure him, saying that this is "what we do", and not to worry, although I did appreciate the concern. What I envisioned as a quick drop off turned into yet another 30-45 minute conversation, in yet another parking lot! I had to laugh at the mild, typical concerns that I'd had about not having anything to say to each other! This was great! After taking some pictures, shaking hands and hugging again, they were off. As I watched him drive away, the reality that we may not see each other for a while, or often enough, set in. We had obviously connected on some level, and I was actually sad to see him go. "Why the hell are we in this situation again?", I asked one last time.

Meeting Mike was the perfect, unexpected possible ending to the "Eastern Phase" of this little adventure. He was the one that I had, unfairly, held the least hope for based on "old intel," and I rightfully and religiously have been chastising myself for making any judgment at all. I should have permanently learned that lesson with Lynn. One thing I've had reinforced repeatedly over June, and now July, is that I need to get my own answers and draw my own conclusions. See the world unfiltered. I have written a lot about that, but find myself failing at some important times. To do that, I need to eliminate preconceived notions, or at least suspend them. Thankfully, Mike decided to do that with me and I'm glad I chose to listen to Shelly when she encouraged me to try to contact him. They unknowingly threw me a rope and rescued me from my own shortsightedness. In the process they helped me to reinforce this lesson and shrink it down from an abstract "social" concept to a tangible, applicable "personal" tool. Maybe I've helped them in that respect too.

The smell of diesel exhaust triggered feelings of familiarity after Mike left. I felt oddly back in my comfort zone, and immediately called Shelly to let her know how things went. I then gave Joey a call in Kalamazoo to tell him what has been going on. He almost immediately offered to come and pick us up. Less than 2-hours after Mike dropped us off, we were back in Kalamazoo, where this eventful Michigan excursion had started a month before. Unfortunately, the plane-hitching idea fell through, but not for a shortage of interest! Adam's plane was in the shop, but otherwise said he would have loved to fly us out of Michigan! Maybe next time...

Being back at Brian & Joey's was a study in short-term contrasts. I began to compare where I was just four short weeks ago as opposed to now; only beginning to feel twinges of the effects of June. I was mentally exhausted, numb, and feeling an odd, nervous contentment. My only nagging concern was rather I was being just as shortsighted with Mike's sisters, Pam and Kim, as I had been with Mike. I had yet to see any indications otherwise and, quite honestly, I was too mentally cashed to go hunting again anyhow. That might have to wait...
Posted by Todd X at 2:46:00 AM