Sunday night around the fire was profound. Chris and I had discussed several times how difficult it is to grasp the concept that we as individuals are NOT the center of the entire universe, despite the fact that our eyes make it seem we are! When serendipity or "fate" is discussed, it's often from the perspective that these events only involve or happen to us, or because of us. That's the ego at work, and oftentimes we forget the obvious fact that others also make decisions and live their lives, thereby affecting the paths presented to us. Their application of freewill sometimes requires us to simply sit still until they play things out. With my ever evolving mastery if the English language, I describe it as being put in a state of limbo and told to "Sit the fuck down, and shut the fuck up!" Ever the wordsmith, I.

If you're unable to let go of the ego's need for control, this limbo it will feel like confusion; you'll be unclear about which path to take. There's a simple explanation for that: It hasn't been decided yet, or you're waiting for someone else on the path to come to you. There have been several examples of this, both this year and last, with the most dramatic this year being with the Church Lady the day Chris's mom decided not to pick us up in New Jersey. Last year's preeminent examples were in McCammon, ID and Randleman, NC. Chris and I have talked at length about it, but it has been one of the most difficult lessons because it requires continuous neutering of the pesky ego: a practice in patience. Sunday, we remembered it and decided to put it to the test. We resolved to sit still and let things happen, while eagerly anticipating Wednesday to see if some dramatic event would unfold. That's exactly what we did.

Monday was spent playing softball one last time, and again sitting around a small campfire chatting. 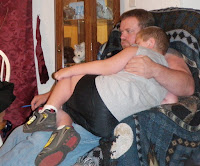 Tuesday was even less eventful, except for yet another campfire. The conversations on these days, however, were quite enlightening. This was a time for us to both reflect back on the past 3-months, and begin to finally grasp exactly what we had experienced as a whole, AND to apply some lessons and ideas as we move forward. Ideas about the next phase became a bit more clear as we chatted about Denver, Santa Fe, Boise, Seattle, Portland, San Francisco, England, and even Mexico. Most significantly, we decided to tell someone about this revelation on Sunday. We told Bob we were going to sit tight until Wednesday, thinking something significant was going to happen. If nothing happened Wednesday, Bob would drop us off in Indiana either Wednesday night or Thursday morning. All that was left was to see if it did...

My brother Mike responded to that 10-day old Facebook request. I immediately sent him an email telling him that I was planning on leaving VERY soon, but that if he was interested I'd love to meet him and would arrange my "schedule" around it. Shit, that's WHY I'm here, after all! He replied that night and said he was definitely interested in getting together before we left, but needed to find out if he was getting a three day weekend for July 4th. If so, we could get together Friday. He wouldn't know until the next day, but after chatting for an hour or so on Yahoo, it was clear that I was going nowhere just yet-even if I needed to wait thru the weekend.

I really liked Mike. Through our little online chat, he and I traded a few stories as we began the now-familiar process of comparing notes, and hitting it off quite well. His reminded me of the response I had gotten from my cousin, Dewey, when he first found out I was related to him. This was NOT the Mike I expected, although to be fair, he's also easily the sibling I knew the LEAST about. I got his number, and made arrangements to call him Thursday night to see about Friday. I immediately called Shelly to let her know what had happened, and of course she was thrilled.

Thursday was understandably a bit restless. I devised a scheme where we could possibly meet Mike in Coldwater rather than Hillsdale on Friday, and would ask if he could drop us off in Angola, IN where I-80/90 comes through. If Mike couldn't make it, perhaps Bob would get us there instead. Either way, we could get on the road Friday.

I finally drafted the email to my father, which I had mysteriously been putting off four four days. I laid out the time line of events, and exactly who I had been in contact with and for how long. In it, I could now also tell him that Mike and I were in touch, and possibly getting together. I hoped that this email didn't reverberate too much, but at least it was the truth. At least now people may be able to speak freely, if they choose to. That can't be a bad thing, and neither can the man knowing who stands where. I sent copies to Shelly and Lynn, and decided to let Mike know when he called. After this, all there was to do was prepare to leave and wait for 7pm to roll around.

Mike did indeed get the day off. Friday was a go. I was stoked. I've never had a brother and I was about to meet one...and apparently a very cool one at that. We had a nice chat on the phone, and he liked the Coldwater/Angola idea. He asked if he could bring his daughter, Ally, and her mother with him so that they could all go fireworks shopping, since they were going to be in Angola. Another niece? Hell, yeah!

Thursday night was a going away party of sorts. 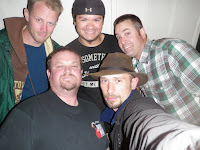 We had another fire in Bob's yard, and drank a whole lotta beer. Ian and Travis hung out for a bit, as did Bob's neighbors. No phones were sacrificed, so it was a good night, yet it was obvious that I was ready to go. Somewhere around midnight I mentally checked out of Hillsdale. Unfortunately, I didn't check into bed until 4:30!
Posted by Todd X at 2:39:00 AM