Chris decided to leave early to walk the 3-miles to the Kalamazoo Greyhound station, while I opted to wait to see if Brian came home. True to form, Brian returned maybe 10-minutes after Chris had left and we both had a chuckle at his impatience. Five weeks now, and these 10-minutes are just unbearable? Brian agreed to drop me off, and after a quick goodbye chat with Joey, who was still at work, we were off to find Chris and get our tickets. We found him huffing down W. Main, and after quick hugs, we got our tickets and propped ourselves outside for the 45-minute wait for our bus to Chicago. 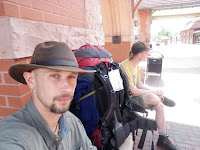 As I was sitting outside smoking, a Kalamazoo bicycle cop rode up and let me know that “Smoking is prohibited at the Kalamazoo Transportation Center. Do... you… have… ID?” he asked rather sheepishly.

I had checked before I had lit up to see if there were signs posted. As I looked again, I confirmed that the no smoking signs were ambiguous at best, cleverly hung to imply that it was prohibited INSIDE the building, while there was nothing beneath the area where the buses board; where we were sitting. 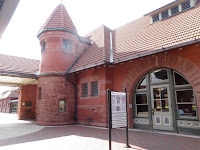 As I was pulling my I.D., I asked sarcastically if it had occurred to anyone to make the smoking policy, you know, clear?

After he called in my stats and discovered that I was indeed warrant-free, he astoundingly decided to confirm my suspicion: this is intentional! An excuse to give these equivalent of rent-a-cops, who apparently can't be trusted with cruisers, the “probable cause” they need to ID anyone criminal enough to be smoking a cigarette! He confidently declared that I could have been a “murderer from New Mexico” for all he knew and that he had “arrested 167 people this way over the last year alone!” Using this pathetically veiled “Papers Please!” method? I could not believe my ears. A bicycle cop was actually bragging about his own personal implementation of a pseudo Police State in Kalamazoo, or at least the parts he could pedal to!

The cops in Maryland and Tennessee had at least been smart enough to conceal their true motives, although they were no different than this guy's. This "cop" then acted a bit indignant, offended even, that I would question his tactics suggesting that I act a bit more “professional” (compliant) from now on and carrying himself as though I were lucky just to have had my privacy violated and not to have gotten a ticket to boot. A ticket I SURELY would have dragged his ass into court over.

As Goering-on-a-Bike peddled off, reminding me of Reno 911's Lt. Dangle, I was of course steaming. I cannot believe what this country is becoming; how even the most basic right to privacy is being butchered in the name of an illusion: “Fatherland Security”. While Chris had typically been less offended than I, even he was dumbfounded at this brazen display of fascism, asking repeatedly "Did he REALLY just say that?" For a state that's hemorrhaging it's population like a hemophiliac, I found this stunning on multiple levels. This was the perfect sendoff, and I was thrilled to finally be re-crossing the Mississippi that night.

PS: While Stalin would have been proud of their enforcement of the "smoking policy" and "Paper Checking," there was absolutely NO security when it came to loading baggage beneath the bus!