Pulling into San Simeon Beach State Park, memories came rushing back. The nostalgia was thick  as I saw spots that have since scorched themselves into my psyche; places only seen in my own photographs for the last couple of years.

It had been less than two-years, but the Odyssey as I now know it began with Pat in San Luis Obispo, and literally took off after mending my blisters at this very place. Meeting Ray here seemed fitting as a kick-off to whatever adventures lie ahead in 2010. The few minutes before seeing Ray felt a great deal like "coming home."


Melody's driving endurance is astounding, so the Pacific arrived much sooner than expected. A full day or two sooner! San Simeon Beach S.P. has only a couple of "Hike & Bike" spots, so finding Ray was a breeze. As we drove in between 8 & 9am, we found him chatting with a pair of bicycle tourists. After a visible double-take he was obviously quite pleased to see me there on Thursday morning after telling him to expect me Friday, or even Saturday. I introduced Melody, and the three of us spent the next couple of hours chatting.

Refresher background: Ray had suggested in early March that I join him for a "hike up the coast." I was here on his explicit invite, and the only thing "planned" was Ray meeting his Slab City friend, Karen, in San Francisco for Easter--still 17-days away. Upon leaving New Mexico the day before, Highway 1 was to be a slow exercise in conversation and improvisation; taking our time navigating to San Francisco, then maybe into the Marin Headlands before Ray returned to his walk, either in Yosemite or Sequoia--after the weather broke. What was to happen after this was speculation. If we got along (and I could keep up), there was the possibility of continuing in tandem up the coast toward Oregon.

With all that, you can imagine my surprise when I learned that Karen was meeting Ray HERE, and she wanted to drive him all the way to San Francisco! Knowing this--even the day before--would have changed things.

Ray assured me that he had explained things to Karen; she knew I had come all this way to meet-up with him, that he and I were continuing on, and that "if we chose to ride" I was welcome to ride along. "Well, gee...that's good to know after a 1,002-mile trip!" He obliquely implied that we could let her continue on alone, but that Karen "was offering a free ride all the way to Monterey or San Francisco!" It was obvious what he wanted to do. It was pathetic that he felt timid about asserting it. I figured we would get it hashed out once Karen arrived later that day. 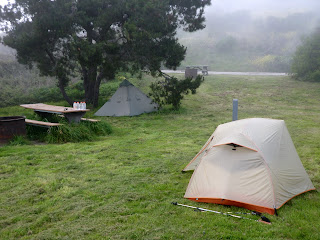 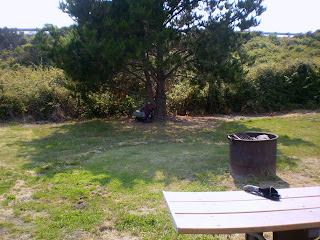 The ride from New Mexico (and the preceding days of inadequate sleep) quickly caught up with me. Both Melody and I were exhausted, so while she spread out her sleeping bag I set up my new Origami shelter on 2008's site and fell fast asleep. An hour later I heard Melody, Ray, and Karen chatting outside and went out to meet my apparent new travel buddy. I instantly recognized her as someone I met at the Oasis Club during my stay at The Slabs. Karen traveled/lived over the winter in a conversion van with her small, white poodle, Squirt, had just spent some or all of the winter at Slab City, and was now slowly meandering back to Ohio via friends in Monterey and San Francisco.

There are a few things about Karen that jump out, especially in this relatively "normal" setting, at least relative to Slab City. Karen is in her 60's, resides in Cincinnati, is a self-described Relic of the 60's, and VERY attached to Ray-- initially, at least, to the point of creepiness. She seemed obsessed with spending time with and caring for him as though he were a stray puppy! Karen mentioned Ray's apparent intention to write a book often enough that it soon appeared that she was making sure she had her own chapter, complete with "guidelines" about what Ray could, and couldn't, write! I had to chuckle when he mentioned my blog and Karen offhandedly said, "Oh, YOOOOOU'RE a writer TOOOOOO?!?" Too? Ha! Poor Karen! Sadly, this was neither the last, nor least, of her misconceptions.

Within 5-minutes, Karen & I clashed--mildly-- when she asked if I had met Moth during my time at The Slabs. I told her yes, and that I thought he was a douchebag. Karen promptly and with a healthy dose of indignation informed me that I "couldn't talk about her friend like that." My reply was that I didn't "give a fuck whose friend Moth was, he was a douchebag" (she didn't argue that particular point at all!). I made it quite clear that I would speak freely...in any terms I choose...without a permission slip. Mr. Congeniality!

I didn't tell Karen to go fuck herself, but in a related story...

I then found that Karen is extremely close with Kari, the anorexic, cigarette bumming, part-time beer peddler from Slab City whom I had told to go fuck herself! I withheld that particular anecdote and offered no indication that I knew Kari, while at the same time learning that I had apparently dodged a large caliber bullet: She had almost arranged to meet Karen and Ray right here...at San Simeon!

Karen also commented that Kari "sadly" thinks of Ray "only as a brother." After hearing him consistently disparage Kari, I found it peculiar that he still had any sort of relationship with her--let alone an interest that anyone could even mistake as romantic! Perhaps she was kidding, but hearing his emphatic professions to the contrary, the entire Kari-exchange (and watching Ray walk its tightrope) provided insight that would prove invaluable with time & retrospection.

After chatting with Karen for a bit, I noticed a developing pattern with the people I had met at Slab City. Nearly everyone there has a dog, and it appears that many adopt their pet's method of establishing dominance and dominion: bark first, bark loudly, and hope they back down!

Just by it's very nature, I'm surprised to say that I doubt I would get along well at Slab City for long. I'll bark back, and look you in the eye while doing it. Many of those that Slab City attracts seem to readily profess a commitment to living an "authentic life," but too few appreciate direct, unfiltered, blunt honesty in return.

Like many, in fact, they will protect their personal narrative more than nearly anything. A genuine commitment to honesty is NOT just that which is "delivered by you"; it means you demand it from others in return.**

Obviously, this is a hypocrisy NOT limited to Slabbers, and would become increasingly clear as time went on. Despite the overwhelming majority providing lip-service and claiming to expect it, it would appear that (to quote Nicholson), "You can't handle the truth!" Fortunately, the truth doesn't care. 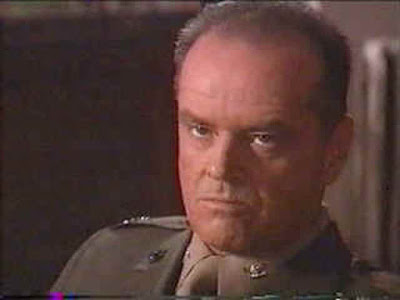 For her part, Melody was a treat and I could not have asked for a better thousand-mile Rideshare! She knows the difference between living and speculating; I'd define her as a Professional Liver-of-Life. She's seemingly spent time everywhere, including hitching in Central America and Australia. She's a wealth of information and ideas, realistic, and Melody does NOT suffer herself to be mired in the muck miring the Moonbeamers on Utopia Road. She was a much-needed breath of fresh air: a nice balance of idealism and realism, while not succumbing to simple cynicism. And, I love the fact that she once taught "at risk" kids their rights so not to be left at the mercy of "overzealous" law enforcement! I have kept in touch with her, and have a strong suspicion that I've not seen the last of her, especially since Boise/Portland seems to be an annual event! 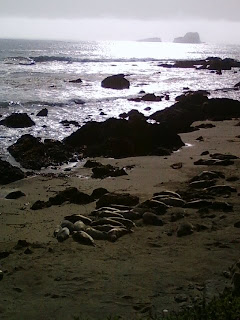 In her perfected non-committal way, Melody hung out long enough to catch the vibe from Ray, Karen, & I and I was happy to hear that she decided to stick around and hang out Thursday night. The four of us spent the rest of the afternoon trying to avoid Thursday's relentless nuisance: fog.

Karen proved herself to be the excellent tour guide, leading all of us into Cambria to see Nitt Witt Ridge. Finding the name clever, I had taken a picture of the sign in 2008 but hadn't realized exactly what it was: a house built into a hill that consisted SOLELY of scavenged and donated materials! It's been designated a landmark, and more than once while looking it over did it remind me of a practical Salvation Mountain.

Through Karen, I was shown the actual main section of Cambria-- a part I hadn't even realized was there! We toured a local mansion, then headed to the Elephant Seal Vista a ways past Hearst Castle and just a bit beyond where Florian & Veronika picked me up in 2008. Since it consisted of more than oatmeal and Raman noodles, I deferred dinner to Melody, Ray, and Karen's expertise while collecting wood and building a fire. 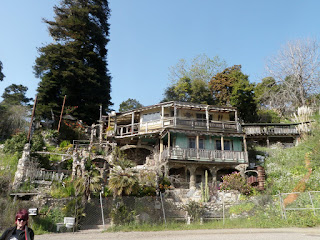 Despite its peculiar moments with Karen & Ray, Thursday turned out enjoyable and when I chatted with my girlfriend that evening, I told her that things just "felt right" and as though I were on-track. I was enjoying myself to the point that I actually decided to join the others and smoked pot for the first time in 9-years. I've never been opposed or uncomfortable around it. Most of my friends growing up and during my radio days smoked. In fact, it probably would have kept me out of a lot of trouble had I chosen it over alcohol! The problem, quite simply, has always been that it puts me to sleep. I literally would end up in the fetal position curled up in the corner--conscious--but unable to move for an hour or so!

There was to be none of that this evening, but it would be COLD! Pacific air is sometimes like opening a freezer. Ray and I struggled to keep the fire going as we finally got the opportunity to chat about things before heading off to bed. Those things? Sports...of all things. 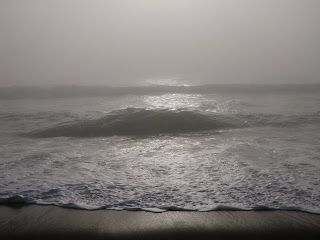 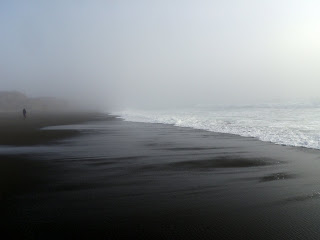 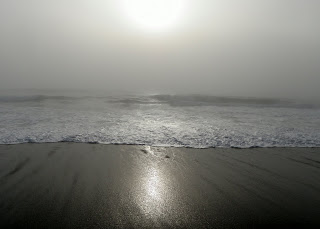