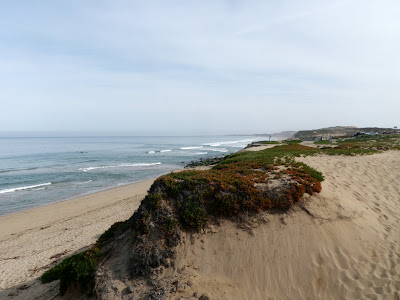 Sunday the 21st started off well! Ray and I sat on our little dune, had a rather extravagant oatmeal breakfast, a few belts from my nearly empty little bottle of rum, and chatted around the distant perimeter of our metaphysical ideas.

Ray’s professed theological beliefs reminded me of my own. In many ways he appeared quite spiritual, yet wary of religion. But, with the “glad to be out of that van” and “get one more meal out of her” comments still top-of-mind, I remembered reading a few Facebook comments from people he’d met along the way--ones religious in nature. I wondered: was he again playing The Chameleon now, or had he maybe played them? The tricky thing about uncovering Chameleons in the wild is that you’re left deciding for yourself what their real colors are. I’d soon be left with no doubt whatsoever… 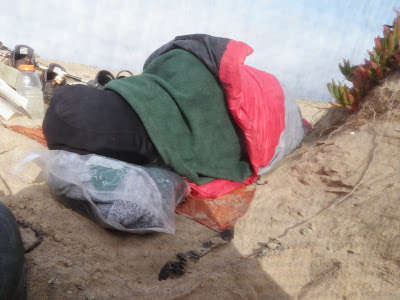 **Mini-Rant Alert**
Ray surprisingly asked my “opinion of George W. Bush” and his time in office. Eeeek! I offered that, rhetoric and mastery of the English language aside, I saw little distinction between he and Obama; that in my opinion, who’s in office means next to nothing. From what I’ve seen, tangibly, Obama had done very little differently than Bush--and NOTHING to repair the damage. The PATRIOT Act? Guantanamo? Wiretapping? Two preemptive, ineffective and economically debilitating wars? Bombing villages and killing civilians? Where dat change?

Beyond that, Insurance Reform was on this morning literally hours from becoming law. Yes, it’s Insurance Reform—MANDATING health insurance--not reforming access to health care. To call the legislated hand-over of millions of  NEW customers to insurance companies “Healthcare Reform” is an insult, not “nitpicking” or semantics. Words--they be important!

Ray offered no opinion of his own, and having embraced a new, happy separation from politics, I didn’t ask. But, he did say that he found my view cynical, apparently harboring “hope” within political institutions with a subtle implication that we should support our “leaders” and help them toward “change.” With unlimited corporate-campaign funding now legal & top of mind, and hearing Ray through a single and perpetual camel-shaped filter, I heard, “man cannot serve [both] God & Mammon.” Supporting a system whose primary concern, and sole entry fee, is wealth? Well, you get the idea. It didn't occur to me at the time, but I wonder: Who would Jesus of the Camel vote for? Or, would he abstain?  **ALL CLEAR**


It was a nice morning! I continued sorting out my intense aversion to Karen, and again admitted that I should have been able to coexist, allowing our paths to peacefully run parallel for awhile. Yet, until that point I mostly saw a woman hindering my obsessive Mission of Discovery. I again recognized that I failed to accept that Karen may have been part of this chapter’s tapestry. However, while I was willing to accept my role in this failure, I also began to recognize more clearly and acknowledge the actual cause and source: Ray. Specifically, his unwillingness to take control of a situation he himself created, leaving two hard-headed people with clashing agendas battling it out.

By early afternoon, the plan was to relax and enjoy the day while perhaps seeing a bit of Monterey. My phone needed juice, so we commenced packing and prepared for a quick trip to the nearby McDonald's where we’d hash out details over coffee. Suddenly, Ray began excitedly waving his hands screaming toward the nearby beach pull-in. By the way he carried on, I thought perhaps Jesus Himself had returned. It was a resurrection of sorts...but Jesus? No.