Monday was quiet, and understandably a bit difficult. As I began to reflect over the previous few days, a cold realization set in about how I had gotten here, and the ensuing isolation and introspection called into question many things. I reflected back to just 4-days earlier, and how everything had felt “right.”

I was severely disillusioned, and seriously questioned my both my motivation to, and purpose for, traveling this way. Powerful ideas were bubbling beneath the surface, but for the first time in memory, I honestly wasn’t sure that I cared. I eyeballed Greyhound and Amtrak as easy escapes and access to a much wanted reset button; had either had a terminal in Monterey, there’s no question that’s exactly what I would have done! 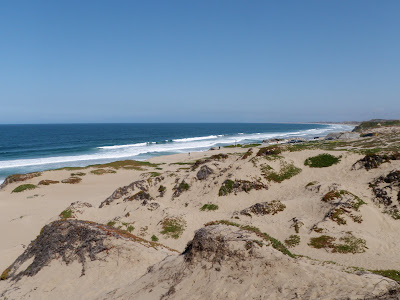 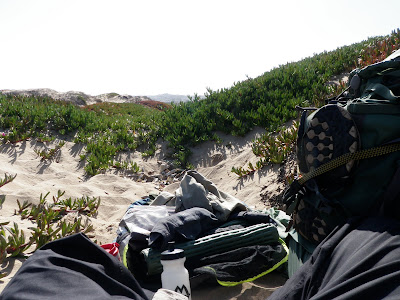 I was obviously still annoyed with being left in Monterey, but also again felt guilty. I had to acknowledge at least a mild, grudging respect for Karen and her, for the most part, forthrightness. While we were Exxon Valdez-grade oil and water, at the very least I never had to question where I stood with her, and shew deserved credit for that. I posted a message to her Facebook page apologizing for the way things turned out and wishing her well on the trip east.

Coming to terms with Ray, of course, was not so simple and I was in fact in the embryonic stages of yet another personal and literary Rubicon: questioning what I would (and would not) share about this bizarre experience.

You'll recall, I had also sent him an email the night before plainly (and emphatically!) expressing how I saw things, and offering him the opportunity to tell me what had happened, if in fact my “assessment” was inaccurate. After offering NO indication that anything was amiss before vanishing, I thought he at least owed me that. I decided that if that never came, all events were fair game, and I would be completely honest in offering my lone perspective of them. As I said before, to me "reactionary explanation" is the textbook definition of "offering excuses."

On Monday, and for the near future, I wanted to believe that there was more to this insane development than clashing with Karen. Even faking after-the-fact indignation would taste better than this! Honestly, it was probably also ego. I didn’t want to believe I had come all this way chasing his published hype and my private narrative.

The universe tried to jump start me a bit through a nice conversation with a cool guy I met at McDonalds. He too was amazed that I had been left after coming all the way out here and asked what happened with them, but we both laughed when he stopped himself and said, “From where you sit, it probably doesn’t matter, does it?”

He warned me to be careful around Salinas (gang activity) and encouraged a northerly route along the bay toward Santa Cruz, explaining that it was a college town, had a hostel, and that I’d be more likely to find the “right kind of people.”

I bounced between the notions of hoofing his way, and heading due-east from Monterey toward Salinas and 101, while also learning that I could take public transit all the way to either San Jose or San Francisco if I chose.

In addition, I have a sister, nephew, and niece all living in Fresno and I hadn’t seen any of them in 15-years, so this seemed like an interesting and unexpected option, although I wasn’t sure I was up for the drama. My girlfriend astutely explained that while Ray & Karen would leave a putrid taste in my mouth, a trip to Fresno may be exactly what the doctor ordered to salvage something positive from this trip. While I saw the logic, I wasn’t feeling it. This entire escapade now felt like a failed abortion of a trip, and I its doctor.

Beyond that, and another comical “Vern” moment that saw me needlessly scampering around like a Desert Storm commando that evening, Monday was quiet & somber.

There was never a conscious decision to stay in Monterey another full day. I just did. When Karen responded to my well-wishes as soon as that evening, even offering advice on things to watch for as I presumably headed north, I knew they'd had access to Internet, Ray had chosen to ignore my email, and I’d likely never get even the courtesy of a direct explanation from him. He and Karen both knew I would write about these things, and he was choosing to remain silent--presumably leaving it to me alone to tell the tale. Until the tale was told, that is! Stay classy, San Diego...

As I reflected on just how much I wanted to share, I wondered: what did he think I would write? Did he assume they’d be fake yarns of Kumbaya, S’mores, and wholesome family living? I wondered: had he, in the glee and positive glow of the post-Slab City and “Ray's Camel” moments, passed my link along to others who may be shocked to read of his actual, unfiltered exploits? And, believe it or not, I began putting an excessive amount of thought into whether or not I should care... 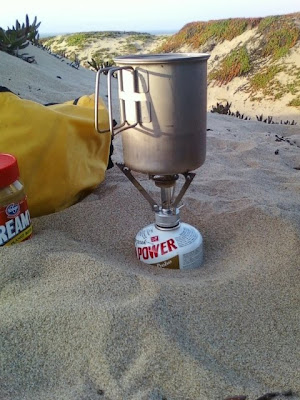