Shelly had not seen my mother since she was a little girl, and I was maybe a year old. Our mother's had remained friends and had brought her, Lynn, and Skip to our house periodically after my mother and our father had parted company. There was never any indication given that I was anymore than "their mother's friend's kid" throughout their childhood. Shelly finally was let in on the fact when she graduated and my mother sent her a card with a "Santa Picture" of me. My mother had tried to get me to go to the ceremony, but at 10 there was no way I could. I'm not sure why to this day.

The plan for Thursday was to surprise Mom by having Shelly come up to say hi. It wasn't completely out of surprise nostalgia. I've cut ties with one of the sisters I was raised with and, since she lives in the area and my mother likes to subversively plan "coincidental visits", I wanted to be sure that there were no unexpected knocks while we were there. 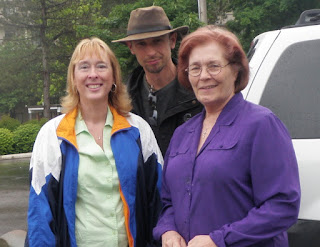 Despite the fact that I had made it quite clear I didn't want to see this other sister, I was not all that sure it would not happen anyhow, especially if she was planning on Shelly to be there. It was quite a nice little reunion. As I've mentioned, my mother has fond memories of Shelly and it appeared that they had quite a bit to talk about, although I am sure it was a bit odd for both! Chris and I ducked out for coffee to give them a few minutes to chat, and before long we were snapping pictures and heading toward Mosherville to do The Family Tour.

My grandmother was essentially the matriarch of this tiny hamlet north of Jonesville. Mary had been the post master, apparently owned a lot of property, and ran the general store. 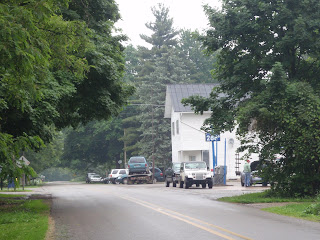 It was neat hearing Shelly reminisce, adding to the fragmented information on her family's past that I had been given through the years. Our grandmother had known exactly who I was growing up, and we would cross paths occasionally, albeit rarely. The only significant memory I have of her is an event at the fairgrounds when I was 14 or so. She simply sat there, staring what seemed like daggers the entire time. Not my mother. At me. What stuck with me was that it wasn't as much disdain in her eyes as it was shock and perhaps realization. Judging by my resemblance to her son, there was probably no further doubt in her "old school" mind that, yes, I was her grandson. At least in the DNA sphere of things! I'm quite certain of this but, despite the obvious, we never had a single, solitary conversation before she died in 2001 or 2002.

Ben, 16, and Brad, 14, are Lynn's kids who were coincidentally visiting from Idaho and staying at their Grandmother Charlotte's house south of Quincy. They had only found out that they had another uncle the week before and, from what I heard, asked Lynn, "How can you have a brother that you've never met?" I thought that was a great, brilliantly simple question and apparently so did Lynn's husband. Dave suggested that they "ask their grandfather" when they got here! Although Lynn did not encourage such shenanigans, and I know next to nothing about Dave, I immediately began to like him! Shelly had made arrangements to meet the boys at Charlotte's house, then grab some food and make a trip to Angola, Indiana to meet her 24-year old son, Travis, at his place. Three new nephews in about 3-hours.

Ben and Brad have had some upbringing. As we walked into the living room, Ben stood up to greet me and shake hands. I was surprised and impressed by this considering the fact that he's just 16. Brad seemed a bit taken aback, and I felt a bit sorry for him. It had been quite a week for them considering they had also been reunited with "new" cousins and their Uncle Skip who had not been a part of their lives. I could genuinely empathize with him. These two had a different aire about them. They put off a completely different vibe. It's a vibe that I can't quite explain other than to say it lacked the "implied, silent negativity" that I'd grown accustomed to over 15 years of on and-off dealings with Pam & Kim.

As we slowly became acquainted, the conversation turned to their airline experience. Ben is old enough to fly by himself, but Brad isn't. This meant that Lynn had to pay an extra 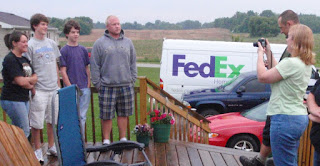 $100 to have them chaperoned airline-style. This equates to be shoved in a little room between flights with a cooler full of Apple Juice, and the Disney Channel on a TV. Chris and I encouraged them to milk it for everything they could to get their $100 worth, including demanding a full tour of the airports, depriving the airline of ALL their Apple Juice, and getting some pictures of the cockpit. I suggested that Ben ask the pilot if he "liked movies about Gladiators" or if he had "been in a Turkish prison." The references went over their heads, but Chris and I got a nice laugh out of it! Charlotte seemed unamused. Hopefully, she's seen the movie because that could have sounded a bit odd, but something tells me I would enjoy toying with Charlotte a bit anyhow!!

Angola is a quick 20-30 minute drive from Coldwater, and we were to Travis' house by early evening with subs in hand. I had hoped we'd be able to connect while I was here. 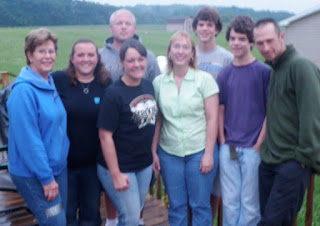 Travis is doing quite well for himself working as a FedEx driver, and has bought a house with his girlfriend in a little subdivision out in the Indiana countryside. They have a huge yard, and got it dirt cheap because of foreclosure. Travis is a big, quiet guy, but has a good sense of humor and a calm almost gentle demeanor about him. Also joining the party was Kirsten, Shelly's step daughter from a previous marriage. Kirsten is a short (fun- sized according to her!), pretty, bundle of energy! Very outgoing and easy to chat with. I was glad that she took the time to come out there; I'm not sure the next time we'd all be in the same place!

All told, this was quite an experience. For the most part, I just quietly sat there watching taking in the scene, trying to appreciate the moment. It was interesting to think back just six months and realize just how much has changed! I have added two sisters, three nephews, and in addition Shelly had been busy trying to contact my older brother, Skip, to see if he wanted to meet up Saturday. Shelly doesn't mess around!

The ride back to Delta was intermittently quiet, then chatty. I had begun to get a bit overwhelmed, especially during the "down times" when my brain goes guano. It was beginning to show. The mental fallout of the past 11-days had been staved by activity, but as this weekend in Delta would show, that was about to abruptly end.
Posted by Todd X at 2:19:00 AM