I was absolutely right about Chris. He got along with Brian & Joey famously!

Tuesday night was spent diving into our different philosophies and experiences as Brian took it all in and offered what was now clinical analysis. To my shock and amazement, however, I quickly discovered that I was having the same sense of difficulty talking with Brian as Chris had with Bill in DC! The days of free-flowing ideas had evolved to emulate Brians' now extensive psychological training. Rather than engaging in the development of ideas, we were being psychologically evaluated. WE were being studied, rather than the ideas! None of this should have come as a shock. Brian has a brilliantly studious mind, and has absorbed everything he's learned. He is also beginning his internships and is counseling people nearly everyday. The fact that he would bring that into our odd situation made perfect sense.

While I was quite interested in his interpretations, it quickly became clear that he was drawing his conclusions a bit too quickly. We had not shared everything with him, by any means, and when I picked up on the diagnosis process and then heard what I identified as the Voice of the Institutional Filter, I began to get a bit defensive. I was struggling to find the "right" words to get my point across, and was reluctant to even broach some of the primary purposes behind this little adventure. Not something I had expected from this! While we were still close friends, it became obvious immediately that I needed to re-define this part of it. I was no longer comfortable walking in this field with Brian!

To be fair, my opinions of the psychological field have always been mixed. While there is indeed a need for some people to get treatment, from my own experience I believe that much of it is simply a method of social control. The practice of categorizing people so that they can be put into a box, then treated by textbook...with the ultimate goal of assimilation. I'm of the opinion that many people are experiencing mental turmoil as a result of an inability, or unwillingness, to listen to themselves and follow their own internal compass. One that cannot be "fixed" or reset. By another person, or ANYONE, regardless of the training or method.

I'm not just talking out of my ass; I've experienced this. I was forced to enter "therapy" a number of times as a "maladjusted youth", and later by the state as an "alcoholic." In all but one instance, they attempted to force me into a pre-approved template rather than encourage me to listen to and follow my own voice, thereby eliminating that dichotomy between what I wanted from life and what is "expected". This was the ultimate root of internal conflict creating the symptoms. They did more harm than good in each case, because the more I tried to "fit", the worse it got. Then the old adage became true: hear you're defective long enough, you'll start to believe it and can ultimately run the danger of giving up.

Until we're ready to accept responsibility for ourselves, then reach the point where we are willing to tell the Ministry of Standards & Practices (institutions, friends, family, media) with their definition of "defective" to go to hell, you're going to have a choice: Live life as the socially engineered clone of your neighbor, or live in conflict with yourself. I've yet to see a therapist that can provide an accurate road map to get here. Then again, maybe that's best for them...if that secret got out, perhaps they'd go the way of the live DJ!

It's quite simple really, and is summed up nicely in the ancient cliche' "Answers lie within." It's impossible to get it from anything, or anyone else but ourselves. We alone are responsible for finding our own, individual path to happiness. That self-exploratory journey is, in my opinion, the essence of life. Both of these remembered lessons were about to repeatedly beat me over the head over the next 2-weeks! I believe even Brian would agree with most of that!

The rest of the time at Brian & Joey's was uneventful, except for a VERY cool reunion of sorts with an old friend. This meeting came at the perfect time in retrospect, because it provided the personification of some things I just wrote, and also was a terrific exercise in "mirroring"; a concept we picked up from Brian. We had some nice chats through the week, but mostly it was spent on computers while they lived their busy lives, then watching TV at night. This time had shown that while we still had great love for each other, we had begun that old familiar process of change that alters friendships, sometimes for the better. 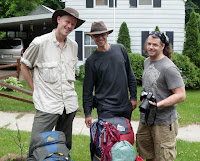 Saturday, I reconnected with my old radio buddy, Sean. He had offered to drive us to Hillsdale, and that simplified things greatly. We had a great time taking the 90-minute ride discussing politics, radio, and whatever else came up. When he dropped us at my friend Bob's place, I was primed to see what was waiting for me here in this place I had avoided like Herpes for 13-years...
Posted by Todd X at 1:58:00 AM