Ben & Brad had insisted on coming to Shelly's house in Ohio on their way to the Detroit airport Friday to see her cats. 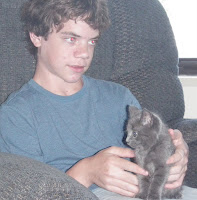 Shelly had lived in Boise for a short of time and they had gotten to know Baz the Cat pretty well. There wasn't a lot of time, but having lunch was nice sendoff , and it was good to hang around them a bit more before they returned to Idaho. I let them know that Boise was on my list of places, and that I'd see them again before they went back to school in the fall.

My primary goal for this entire Michigan visit was to be sure that I left with no questions to be asked, even if the answers came via omission. I like to use the analogy "Water thru the Pipe". Put enough pressure behind it, you'll find the cracks. I intended to make myself as available as I could, and make every effort to allow people show their character; good or bad. A clear choice would be given, and we'd see what they'd decide.

Shelly was the catalyst for this, and unfortunately for her, she was also on its emotional roller coaster. She had been hoping to set up a couple of reunions over the weekend, still holding out hope for at least the two of us having dinner with our father. There was also new, rather unexpected hope surrounding our oldest brother, Skip. She had contacted Skip's wife, Kelle, and learned that she herself was considering trying to contact her own "long lost" brother, who had been given up for adoption. Kelle was very interested in finding him, and since this was something that was happening in his own world at the same time, it seemed possible that Skip would be in the right mindset to meet me. Kelle agreed to chat with him, and as Saturday approached, we were waiting to hear the verdict.

This felt quite familiar, and it had a familiar ending. When Kelle relayed to Shelly that Skip "wasn't too keen on the idea" it set off a domino effect of realization. This was the final piece of the puzzle. I seemingly had everything I needed to finally begin drawing long overdue conclusions, and they were based on reality as opposed to speculation. It would appear that despite the fact we share DNA, I had missed out on very little growing up other than an emotionally barren desert! Despite all the talk of "getting together" before I had left New Mexico I had heard nothing from Pam or Kim, and now had since been given a stiff arm by both my father and brother. It was becoming clear who I was (or wasn't!) dealing with and, while painful on a base level, it was also clear that I was indeed "the lucky one" to have been spared the baggage. Despite proclamations of "victimization" by my father's "inability to communicate and deal with them" they were themselves in fact that "mirror" of what they claimed to hate. That hypocrisy was blinding, and my questions about who these people are were finally being answered. At this point, I was totally unimpressed beyond Shelly, Lynn, and her boys.

Surprisingly, with this realization came a stunning freedom. With the bar set this low, it's much easier to take what I've gotten, move on, and attribute the disappointment to the simple fact that the rest suffer from an emotional, even human, deficiency that has nothing to do with me. It also further solidified another growing realization about the "American Dream" and the fairytale concept of "family" and, more importantly, "normal." We've been fed an idea that we're supposed to live up to the impossible standard of "Father Knows Best", "Little House on the Prairie", or any number of these other images of the happy, tranquil, "normal" little family. Some families function better than others, to be sure, but dig deep enough and I believe you'll ultimately see thru the illusions, walls, and fronts. Ward cheats on June, Wally likes Meth, and I'll bet the Beaver is a cutter. The wholesome, perfect family is wholesome, marketed bullshit. Worse yet, it's as unattainable as Barbie Doll physique.

These notions of "normal" result in outrageous expectations, and a sense of failure when you don't quite measure up. "Normal" is a Hollywood production that is marketed, then sold, to keep us chasing the unachievable: a faux idea of "happiness", and where it comes from while at the same time exploiting simple human imperfection and insecurity. I'll let you infer as to who benefits when the masses are chasing ghosts, and some will say that's cynical. I'd counter that quashing these "Notions of Normal" is liberating and the first steps toward freedom. It allows you to be happy with the best YOU can be and accept who YOU are. What better path to happiness and contentment than doing the best YOU can, accepting your faults, and telling "normal" to fuck off?

Another surprising realization was that with this acceptance came an unexpected level of forgiveness. I was disappointed, yet no one' s perfect. I believe that when we can accept the fact that every family unit, every human being is flawed, imperfect, and that "normal" doesn't exist, then we can on some level even APPRECIATE the flaws each of us have INCLUDING our own. In my case, I began to sympathize rather than feeling victimized and, after a day of self pity, I felt some long-held anger finally begin to subside and that old, familiar hole actually begin to fill. I never understood the Buddhist philosophies on forgiveness and ego better than at the moment I realized this was happening.

I was also, for one of the very few times in my life quite proud of who I have become. I had shown courage and conviction in this case and had shown character that has been missing from the rest of that family, save Shelly and Lynn. I had offered myself up, risking the likelihood of another painful rejection, in a relentless pursuit for "Truth." Vitam Impendere Vero. "Facing fear is the beginning of wisdom." That Bertrand Russell!

I felt very bad for Shelly, however. It dawned on me (after my little pity party, of course!) that she was taking this very hard. She knows her family is far from perfect, but I believe she had hoped that this month would provide an opportunity for some healing, and steps toward being a bit more of a functioning unit. With my father's unwillingness to have me at the BBQ, Pam & Kim's blatant indifference, and now Skip's failure to respond, she was resigned to the fact that it probably wasn't going to happen. Once I could see the forest thru the trees, I saw that she had shown an incredible amount of courage herself and risked many of the same feelings of rejection and failure that I had. She showed an extreme, rare character, and I hoped that she would take a sense of pride out of that. I myself was very proud to have her for a sister, even though in my self-absorbed, burnt out mental state, I was incapable of showing it very well!

The rest of the weekend was quite uneventful, as I typically isolated myself as I processed everything, and resisted the urge to write (vent) on it until the dust had settled in my mind. As the weekend concluded, I had a sense of closure and it began to feel as though I was ready to move on. To put a neat bow on everything, I sent a Facebook friend request to the last remaining sibling, my younger brother Mike. He was the last one I had yet to contact, and I didn't want to say to myself later "what if."

The "Michigan Adventure" seemed to have played itself out, but we had made arrangements with Shelly to be around her place again the following weekend.

That genuinely felt like overkill at this point, but there was still no clear path as to how else proceed. Chris and I decided to go back to Hillsdale for the week to goof around and see if there were more things that needed to play out--as is usually the case when we seem to be in limbo. Sometimes, we need to sit down, shut up, and let other people live their lives for a bit! We did get a huge laugh when I started receiving pictures from Ben highlighting his flight home! He was, indeed, getting his $100 worth!
Posted by Todd X at 1:53:00 AM