Shelly and Chris had reconnected in Delta and as I waited for them to pick me up for this Sunday meeting, I was simply ready to get on with it. The thought, "Why does this have to be such a production?" was foremost in my mind, plus I was interested to see how the three of us would interact and see how it would compare to our brief meeting in 2000.

We deposited Chris at the place of his own choosing, the woods, then Shelly & I made the 40- minute drive toward Marshall, chatting about how we had gotten where we are and the possibilities of where we were all going now as adult siblings. It has been obvious from the beginning and more so as time went on, that there were cavernous inconsistencies between assumptions, realities, and expectations. Who knew what? Whom had talked with whom? My one hope for the afternoon was to annihilate these gaps, and be sure that the three of us at least were on the same page so as to be able to act from a position of fact. If I could somehow do that, I would be happy.

We arrived at the restaurant in Marshall ten minutes early for our 2:30 meeting. As 2:45 came and went, there was still no sign of him. We couldn't imagine him just standing us up but I confess: the thought entered my conspiratorial little mind! Shelly began making calls and discovered that there had been a mix- up on the time! He had arrived at 1:00 and apparently sat there for an hour, leaving 20- minutes before we arrived. He had gotten rid of his cell phone, so had no way to contact us on the way up. He was not pleased! Great.

Shelly was not giving up. She asked him straight out if we could just drive up to his house in Charlotte. As she was asking, I was cringing. I didn't like this idea! It felt like I was invading someones home, but to my amazement he was fine with the idea. It was up to me. This was a surprisingly difficult decision in the sense that despite the effort I had put in and that this may be my last opportunity, there was an urge to "cower to the moment", and just let it go. To my credit, I caught myself and saw it as it was happening. I had berated a perceived "lack of courage" just the day before, and now was on the verge of providing my own example of just that, and my very own "glaring hypocrisy." It's easier to be critical from the outside, isn't it?

For my own self- respect I HAD to do this, and I needed to do it for Shelly. After a quick beer, we were off to Charlotte. The rest of the drive was light hearted, even loose. It quickly became apparent how silly this all was, and I resolved to just have fun. Neither Pam nor his wife, Mary, were at home so it would just be the three of us having a nice little visit. I also figured he's be in his element; perhaps a bit more relaxed than the guy who was "sitting at the end of the bar drinking beer" as the waitress put it. That could help ease things a bit.

My father is an ex-Marine who has recently retired after running various DHL terminals for a number of years. I was just slightly nerved up as we arrived, but that quickly evaporated as we walked in the door.

I shook his hand, told him it was nice to see him again as he smiled and returned the compliment. There was no obvious tension as the three of us went out to the back yard and began chatting. He did, however, seem a bit at a loss for things to say, as you can probably imagine. What do you say to a son you have spent less than an hour with, and that being 8-years ago? It was rather comical when he asked "What are you doing these days, Todd?" My typical response seemed a bit inadequate, so I quickly stumbled through the basic answer of "Threw my stuff in a backpack and am traveling around." He had NO idea what to do with that, and I'm glad! But, through that, I quickly discovered that we have a couple of significant common interests. The topics of traveling and New Mexico gave us the opportunity to get to a comfort zone.

Norv owns an RV and loves the southwest; New Mexico in particular. He and Mary have a spot in Las Cruces that they like to visit and he claims that he would retire there if Mary would. 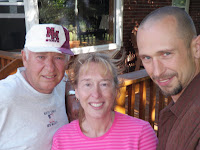 Our shared affinity for New Mexico goes beyond that, and is on the edge of creepy. He told of a trip he had taken through it as a young man, and how he had just gotten "hooked by it." Something that has stayed with him for the rest of his life. I then chuckled as I recounted how in 1998 I had taken a drive from Des Moines to Phoenix, through Santa Fe, and been completely hooked. "I WOULD move there one day!" And I did, in 2004. Don't laugh too hard! There's a "frequency" about New Mexico; one that grabs A LOT of people and just wont let go. These are just two examples of a story that's repeated surprisingly often. He's also not all that impressed with Santa Fe beyond what he called "Old Town"; the area around the Plaza where the Santa Fe Trail ends. I didn't ask, but I doubt this old Marine has much to offer the pretentious, bourgeoisie hippies on Canyon Road either!

While he was showing and narrating the picture DVDs, I learned that he had stayed in Espanola while I was literally living 5- miles away in Pojoaque. He had been driving on US-285 within 1/10 of a mile of my house. Visiting Buffalo Thunder Casino. 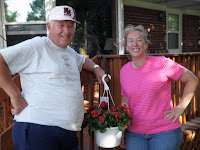 As I saw his pictures of the Santa Fe Plaza, church, and the Palace of the Governors on his TV, it struck me how insane this whole drama REALLY has been. Really, why are we here? That would be for Shelly and I to discuss on the drive home. We wrapped up our visit by watching the Tigers beat the Astros on a Brandon Inge 9th-inning home run. I thought that was fitting too, sitting on the couch chatting baseball. It happened that he was planning on being in Colorado in August, so I offered my connections at Coors Field to get tickets if they make it to Denver. Norv had said he was contemplating extending that trip up to Boise, also in August. I told him to keep an eye out for a big red and black backpack. I think he thought I was serious, that made me chuckle a bit!

After a tour of the RV and snapping the first and ONLY pictures of us together, I got permission to get his email addy then Shelly and I were headed back to Hillsdale. Getting those pictures meant a lot to me, as did the fact that he let me come into his home. That's not something to be taken for granted, and showed me something. I had been mischievously praying to Jeebus that Pam would happen home just to see the look on her face. Alas, Jeebus would have none of my shenanigans.

There were times during the nearly 3- hours that he had the look of a man who wanted to say something. That something obviously wasn't "get the hell out of here!", and for whatever reason just couldn't quite do it. Quite honestly, it spoke volumes as it was. I can only speculate what these "things" were, but the looks occasionally reminded me of Chris's father that afternoon in Springfield. The conversation was relegated to the superficial, but for once with me that was fine. It was great for what it was, and I learned quite a bit.

Shelly and I went to Arby's to make up for our missed lunch, then had much to talk about on the way home. I told her that we had just done something very significant, and that it was shared experiences like these that turn "siblings" into "brothers & sisters." It had occurred to me that exactly that had just happened. Shelly was beaming, and was thrilled that we had some success while I was here. Norv had shown her something, too and she appeared to have gained a new level of respect and affection for him. I was happy to see that, and glad that I was perhaps serving more of a purpose than that of the "Classroom Disturbance!" More on that to come...

We continued our exercise in pasting together the growing pieces of information, and I decided that I'd use this new email address to be sure that he knew exactly what had been going on since 1994. Who met whom when, etc. Shelly and I had begun to draw the conclusion that he was possibly in the dark over exactly what was happening beneath his feet. I wasn't going to perpetuate that. Plus, I wanted to show a bit of the "respect of direct honesty" after the man had let me into his home.

Once Chris was picked up, we said goodbye to Shelly again, for the 4th or 5th time! We quickly stopped in to let my mother know how it had gone, and soon Chris and I were on our way to Bobby's to let things sink in. Bob was at work all night, so the two of us sat around a small fire drinking beer and chatting about what had happened not only today or the past month, but the totality of events since April 13th. This phase was seemingly closing down, and from the Veggie Bus to today it had exceeded even our lofty expectations. If we are not even three months in, imagine the next 12!

It seemed that I should now be free to head west, but we both noticed a sense that we weren't quite done just yet. For once, we noticed the sense of limbo as it set in, and it felt centered around Wednesday. We decided to do a little experiment, and just relax for the week to see what happened, if anything, on Wednesday. We even told people about it beforehand, just in case...
Posted by Todd X at 1:37:00 AM