The ONLY reason Greyhound is still in business is because it's a monopoly. Every year, they find new and astounding ways to baffle me with what I believed to be futility. I've since realized that it's not "futility"; they just don't fucking care. They don't have to! Why has this company been granted National Bus Line status? More on this latest vulgar display to come...


To catch you up: The remainder of January was spent sporadically chatting with Chris and adjusting my "schedule of intentions" around a string of Pacific storms. Chris had made his way from Denver to Los Angeles to see family making this a prime opportunity to consolidate a few different ideas:

When Chris made his abrupt decision on when to go to LA, early in January, I figured it would be worth accelerating my "plans"  (ha!) by a couple weeks in order to accommodate the opportunity. Originally, it appeared as though 1/17 would be the [first?] 2010 departure date...until the storms began battering southern California & Arizona. Chris was buried with family beneath 5 FEET of snow in a cabin near Big Bear while the California and Arizona desert experienced flooding of biblical proportions; at least it seemed that way to them.

With the storms, Chris repeatedly delayed his departure east, which in turn allowed me to creep further toward, and then to, my original date: 1/27. In the end, it worked out perfectly. It would be 1/27 after all, and I was quite glad after seeing news footage that I was NOT in the desert during these storms. In fact, we would all see the effects of these storms first-hand later on.

After coordinating with El Jefe in Phoenix, and having a nice last week in Santa Fe, on January 27, I found myself on the way to Albuquerque to catch the 11:15pm bus for Glendale, AZ. My girlfriend and I had a nice conversation on the way, and it repeatedly struck me that leaving for Phoenix felt similar to departing for Devils Tower last August. We said our goodbyes, and I found myself on that metaphorical "on-ramp" again.

The bus boarded late and was 30-minutes behind to begin with. I was exhausted and fell asleep before the bus had even left the city sprawl.

Imagine my surprise when I woke up a few minutes later to see the bus back at the Albuquerque terminal! Just sitting there. No explanation. Nothing. Just baggage handlers acting like mechanics and checking something on the bus. After 30-45 minutes, the driver finally shared with us that the bus was getting no heat and that we may need to switch buses if it couldn't be fixed. Story: meet theme. 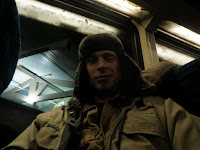 An hour later, we were still on that same bus. Still not moving. Still with no idea of what was going on. The bus was scheduled to arrive in Glendale, AZ at 7:45am, and El Jefe didn't work until 1:30 which gave a 5:45 window on an 8-hour ride, so I felt safe. Others, however, were not so lucky and quite pissed off that they were going to miss their connectors...and were not being told details.

At 2am we were finally herded like cattle aboard another bus and again on I-40 toward Flagstaff. I chose to remain awake this time to observe the ruckus if we were delayed again! Now over two-hours behind, and likely arriving at 9:45 rather than 7:45, I figured Jefe could sleep in a bit so (selfishly) this wasn't a complete clusterfuck.

I awoke periodically through the night to the sight of slick roads due to a moderate snowstorm in Arizona. At 6:45, I discovered to my utter dismay that we were still an hour EAST of Flagstaff! I called Jefe to let him know, and resigned myself to fate. A couple hours late isn't so bad as long as nothing else happened.

As long as "nothing else happened?" Ha! This is El Perrito Sucio!

The driver emphatically told everyone that we would be in Flagstaff NO LONGER than 5-minutes. Forty-five minutes later the driver had vanished and the passengers were something a bit south of restless. To complicate matters, Flagstaff had received the same 5-FEET of snow as Big Bear thus the terminal was closed out of fears the roof may collapse from the snow's weight!

An hour after arriving, a woman intending to board in Flagstaff instantly became the target of wrath when some especially abrasive passengers assumed we were being held up by HER for some reason. Despite her gladly joining the chorus of frustration, and even laying on the bus's horn to hurry things up, she was understandably upset by how other passengers treated her and decided to find other means by which to travel.

Shortly after she left, the bus driver returned to admonish the mob insisting she had nothing to do with the delay. When he didn't respond to my query, "Then, what the fuck IS the delay?", I politely offered that perhaps the loss of her patronage was then HIS fault, not the fault of passengers who had been abandoned then ignored for FOUR hours on this supposed 8-hour ride.

Did he think we'd go Hymn Time Country Style? Reenact episodes of Gilligan's Island? It was closer to Mutiny on the Bounty.

Near 9:00 (two hours after this "5-minute" stop began), I became concerned. If this went on much longer, I was in real danger of missing my ride. Thankfully, the driver came out to confirm another rumor: that he was awaiting a fax from Greyhound; one clearing him to continue on to Phoenix, presumably due to driver time-limitations. A few minutes later, the fax had come and we were mercifully on our way south mocking the bus driver, and organizing to be sure that no one on that bus paid for the ride. 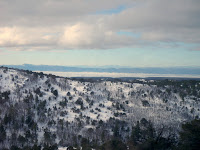 Somewhere near Sedona
Despite my concerns, things worked out fine. The bus arrived in Glendale with enough time for Jefe to pick me up AND get to work, leaving me at his house to contemplate what came next...