El Jefe had taken the time to closely observe things, and I was surprised to learn that he decided the place intrigued him enough to take the day off and hang around. That's quite a big deal for him, and nice that we'd be able to hang for another day. Saturday is also Chris's Phone Day: the day he catches up with everyone. Unfortunately, this one involved unexpected complications in Denver. Needing to focus on that, he took his leave of Leonard & Salvation Mountain. The three of us congregated at the bunker to see what the rest of the day held. 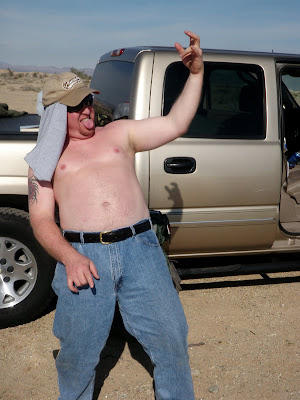 Slab City Critter
Jefe and I spent the next couple of hours exploring the desert and it quickly became apparent that he was connecting some fundamental dots. I felt for him in that I sensed the same excitement- mixed with frustration and anger- I had myself experienced a few years ago and wondered if this was the first instance of life "outside the Cave" becoming real for him. Was he re-defining Plato's shadows on the wall? One of my biggest struggles was this movement from Abstraction to Action, and of course mustering the courage and trust in myself to do it. We all struggle with that. 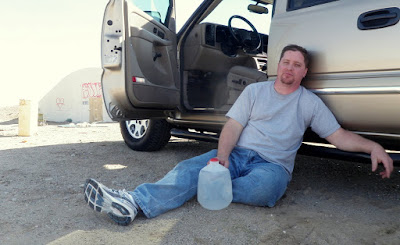 A couple hours later, Chris was off the phone and, since we had actually spent no time INSIDE Slab City other than meeting up with Chris, we embarked on a quick truck-tour before heading to town to pick up the night's food. Even after seeing its expanse from atop Salvation Mountain, I was surprised at how large Slab City's square mile really is. I was also surprised at how sparsely occupied it felt. The last 20-years has seen a significant drop in snowbird migration, for whatever reason. Now, in spots it has the feel of an actual abandoned military base with the occasional RV or camper cropping up, rather than that of an RV park. Many people have a full yard (of dirt) to play with! 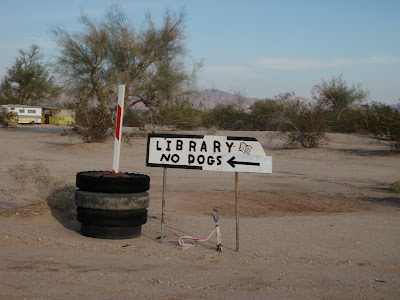 Slab City's also not without its entrepreneurs. On the extreme eastern end is the Slab City Library. There's also a Christian Center, although the vast majority of residents are at best agnostic- with practitioners of Paganism quite nicely represented! The proprietor of the Christian Center was referred to us as the "Tokin' Christian."

Kevin told us about the Oasis Club on Friday night, and there were two stages for live music, the smaller of which we saw Friday. The larger stage, The Range is the one featured in Into the Wild and has their show every Saturday night.

In addition, there's even someone selling solar panels on site, several handymen, and other little signs advertising services. It struck me as what capitalism might have initially looked like and was probably intended to be: services provided based on a need rather than needs created by a desire to sell the service.

It all again made me picture what I imagine the old west to have been. Regulation? Ha! If you provided a shitty service or product, people talked and you ceased to do business. The only advertising was word-of-mouth and the occasional hand-painted sign. The only brand name signage was used to build something, or as firewood! All of this pushed me just an inch further upon a path I've been slowly slipping onto for awhile: that mankind was never meant to live in a SuperSociety. That we, and the planet, are better served organized into smaller groups; free of centralized control. It's an idea I've not tried to develop and of course raises as many questions as it answers, but it's interesting to think about. I can say for sure that nothing I saw during my stay at The Slabs discouraged the idea! Slab City was not Survival-of-the-Fittest/ Anarchist Hell. Far from it. There was one unspoken, implied law: Don't fuck with people. Justice will be swift and brutal. It reminded me of hockey in a strange way!

After our little tour, El Jefe, Chris, and I decided to get food, I thought, in Niland. Twenty-miles later, Jefe was pulling into Brawley, the largest town in the area, near the southern shores of the Salton Sea, and on the main east/ west route not named I-8 or I-10. Jefe, being a Supermarketeer, found the local Von's store where we loaded up on food and beer for the night. To Jefe's beer-snob chagrin, I decided on PBR as a tribute to Eric, who I thought would really enjoy Slab City!

Back at the Slabs, the idea was to return to the bunker, build a fire, and replay Friday night. Being shortly after sunset on Saturday, I suggested that we first head up to The Range to see if the music and crowd was better than the night before at the smaller stage. When we got there, Chris immediately vanished into his phone so Jefe and I sat on the recycled couch chatting and watching/ meeting people, including the guy who claimed to have started The Range, Builder Bill. According to Bill, he had started The Range just 7-years ago. Chris McCandless and his underage temptress apparently did NOT wow the crowd with their organic musical talent; at least not from this here stage. Foiled again! Is there NO honesty left in Hollywood?!?

Despite that, this was a much better collection of people and talent than we had seen the night before, although we scarcely gave the other place a fair chance. Bill explained that the other stage was started by a pissed off former partner who thought Bill was a racist and shortchanged him on tips. Ahh, drama! Melissa made an appearance, the last I would see of her, as did someone we first heard about from her: the man who had recently set the world record for some kind of hike. It was still in progress and he'd stopped off at Slab City to take a break. Melissa referred to him as, "The Under Armor Guy" because of the fact he was sponsored. Although we didn't chat, we spotted him, and his fancy Under Armor sweatshirt.


I also saw for the first time what first struck me as a disturbing, warped, hippie-creature of epic proportion. It was dreadlocked and wearing a dress- although I'm certain it would have defined it a "kilt," or some other culturally enriched garment. I later found that he called himself "Moth", lived in a concrete water tower, and had supposedly been on MTV at one time or another, no doubt perpetrating random acts of douchebaggery to entertain and scar innocent, unsuspecting youth. I remain skeptical of the claim, but if you can tell me who he was, please do. From then on, the thought of having his special brand of nonsense spewed my way greatly outweighed moderate curiosity.

Also making her debut at The Range that night was an anorexic woman I would describe as "Slab City cute." She was selling beers out of a cooler and would resurface with a flourish a couple days later.

As 11:00 rolled around, El Jefe was itching to get back to Phoenix. He had to work Sunday, but obviously had enjoyed his time in the desert. He was jokingly elaborating on how he could just... stay... and was saying it with regularity and less "humor" in his voice each time! I couldn't quite get it across, but I felt both happy and pity for him. Happy that he was asking questions and looking at life through his own eyes rather than relying on the Institutional Filter. The pity came from the familiarity of what's coming: either submission or a fierce battle with ego and fear. 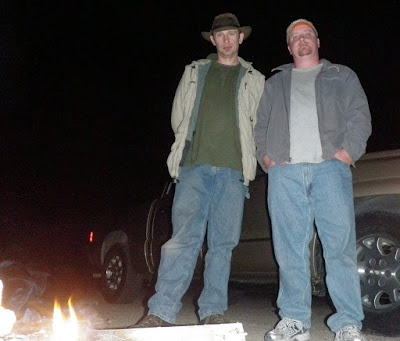 Rather than head back out into the desert, I suggested that Chris and I actually set up camp INSIDE Slab City where we may be able to meet more Slabbers and get a better idea of the place. We retrieved our pallets from the bunker, found a spot, built a fire and that was that. Jefe took his leave from there, and Chris and I spent the next couple hours chatting.

Chris had Sunday circled as his departure day. He seemed quietly frantic to resume course to his new destination, San Antonio to see friends, despite adamantly professing (again) to be in "no hurry." Sound familiar? It did to me. Feeling like a broken record cruelly animated for the sole purpose of kicking a dead horse, I suggested just sitting down for a moment to see what happened here. During the 2+ days he'd spent at this spot, tonight was the only real time he had actually spent IN Slab City. He'd allowed the first two days, in my mind, to be hijacked by Leonard's agenda. "What else was here?" I asked.

One of my points of this jaunt had been to see where both he and I were these days, and by now I had spent nearly 24-hours having a silent, goodhearted laugh at Chris's expense. He had written just a week or two earlier how he believed in the Sit Down & Shut Up/ Side Car Analogy ideas; even (wrongly, in my recollection) staking claim that the Side Car as his creation- not that I'm keeping track, of course! Now, here was the familiar character... still unable to relax and unable to resist lunging for the metaphorical handlebar... from that very sidecar.

A recurring theme for this weekend, and the immediate future. We talked about most of this around the campfire that Saturday night, and it was a nice conversation. Yet, at this point, I was wondering as to Chris's role in this little desert-excursion beyond more than a quaint get together...
Posted by Todd X at 9:38:00 PM