Salvation Mountain
One of the first things to learn about "The Slabs" is its primitive clock. With no electricity beyond an occasional car-battery contraption or gas generator, there's little to do past sunset other than sit around a fire drinking beer. While I personally approve of such enriching activities, beer costs money- meaning people are usually in bed EARLY. In fact, Kevin claimed to be in bed often as early as 6 or 7, and up with the sun. 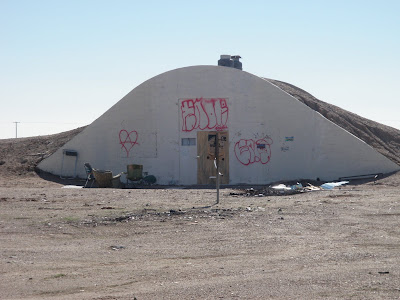 The Bunker
Adam, Melissa, and Jefe awoke early Saturday morning for a trip to the nearby hot springs. Even this is fascinating at Slab City. It apparently flows, preventing the water from stagnating and allowing the springs to be used as a 105-degree natural, communal bath tub! Other than paying $8 to rent a room in Niland for 30-minutes, or hopping in the nearby canal, this is the only way those not living in an RV can bathe. Jefe assumed that everyone jumped in the hot springs wearing their boxers. Jefe assumed wrong. Jefe was ambushed by a full frontal-nudity assault! It remains unclear as to whether he returned fire.

Chris and I awoke shortly after they returned. Adam & Melissa had since made their way to Salvation Mountain to begin toiling with Leonard and Chris wasn't far behind. Jefe and I took our time before walking over ourselves to see this obnoxious-religious-display yet world-famous piece of Americana. I had no intention whatsoever of volunteering my time to restore Leonard's art, yet couldn't articulate why. Something about all the volunteers just rubbed me the wrong way. Dedicating a couple hours out of one day to help out a decrepit old Slabber seemed like a decent thing to do, but there was something commercial about it; it smelled like the Red Cross to me. It wouldn't gel for a few more days; this was 2010's first "forest through the trees." Aww. 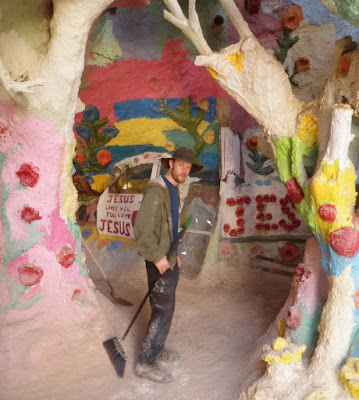 After finding Chris pushing a broom, we took our own separate little impromptu tours. I feel safe in saying that Jefe is not quite a Christian man. His visible reaction to this tribute to "God's Love" swung regularly between amazement and amusement! He had a mostly-silent permagrin on his face, and not due to receiving the Holy Spirit. I met Leonard briefly, and was rather surprised to get the same, "people just been loving me from all over the world" line we all heard in the movie. This struck me as a talking point, and rather than engage him personally I subconsciously chose to just watch him interact with the people around us.


I eventually saw what Leonard refers to as the "Into the Wild Room." This struck me as odd, disconnected, and quite a bit "Carthage." At the same time Sean Penn was filming his movie, filmmaker Ron LaMothe was shooting his Chris McCandless documentary, Call of the Wild. LaMothe took a much different approach, challenging many aspects and claims put forth in the book/ movie. One of the scenes in LaMothe's 2007 documentary (presumably before Penn's crew arrived) shows Leonard Knight having no personal recollection of Chris McCandless referring to him (11-years after the book was released) as, "that kid who went to Alaska and died in a van." Through the use of outtake footage, Penn's movie makes it appear as though Leonard had some sort of bonding experience with McCandless. Obviously, he didn't. Or, at least not enough of an impression to even remember him 14-years later.

What does this matter? It wouldn't in a world where horse-blind idealists were interested in critical thought. However, Leonard Knight- while appearing to be a half-crazed, uneducated, possibly learning impaired backwoods rube- has profited nicely from this inferred relationship. Like Alaska and the "Magic Bus," the story has sent flocks of McCandless Cultists into the Mojave Desert with Leonard as a primary attraction. Parched by a thirst for idealism, but drowning in Hollywood glitz, they gush at the old man as, someone who actually KNEW McCandless and is accessible.

But, not actually REMEMBERING McCandless, the idea that Leonard would build an "Into the Wild Room" into this project- his legacy; his ART- supposedly inspired by a vision from God, is baffling considering he likely never met the kid. Baffling that is... until you see the flow of traffic into the place! It's a bonafide tourist attraction with Largest Ball of Twine status! And, half of the attraction is Leonard himself! Because of his homeless, pauper image people steadily bring him food, water... and money. In fact, I personally saw all of these given, repeatedly, in the short hour I was there!

The most memorable was a group of college-aged girls who looked upon Leonard with an awe typically reserved for rock stars. They said their hellos and immediately announced that they had brought him a load of canned food... enough so it would be more efficient to move the car, rather than carry it! I envisioned a dorm room viewing of Into the Wild followed by, "He actually knew Chris, and what he's doing is amaaaaaazing! We should take him Spam!" I saw several people pony up hard cash, and have since discovered that there's even a website saying, "Donations are accepted only if it comes from the heart." I'm going to add that line to my PayPal link. God Bless! 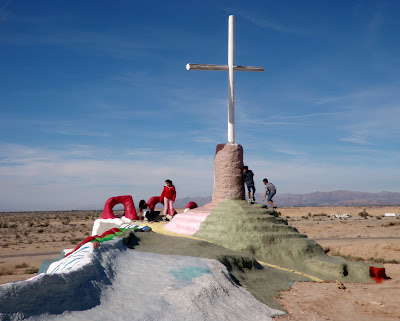 Someone later implied how much he suspects Leonard makes from the Mountain when he pointed out that he's been targeted by thieves over and over again, and that he's having to watch one person in particular even now. Thieves talk. Another Slabber made an interesting point when he implied that Leonard rakes in hundreds of dollars per day: if he's such a man of God, why no ministry or charitable foundation with the money? Why not do SOMETHING with it? To be fair, there was a not-so-subtle tone of jealousy in his voice but the common thread remains: Leonard is NOT hurting for money. That was driven home even as we left that day and a volunteer implored us to take water or food saying, "we have more than we know what to do with." I thought of that particular woman on my way out of the Slabs for good... hitching a ride in a van full of kids going to Niland to sign up for "government cheese."

Of course, there's a flip side to this story. I later learned that Imperial County AND the State of California both wanted to kick all the squatters off of the Slabs years ago. What prevented that from happening was 1.) Slabber's injecting money into Niland's quadriplegic, methhead-deathbed economy and, 2) the money Salvation Mountain tourists bring to Niland. I had assumed Niland viewed Slab City as a boyle on the community's ass. To the contrary. Slab City's residents spending money in town is literally the only thing keeping it afloat. The old military base still generates money! 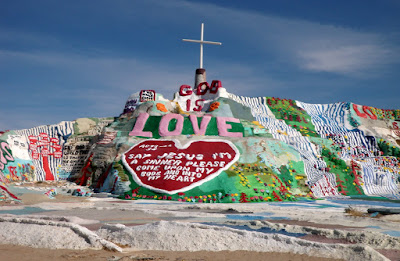 I honestly don't know what to think of Leonard Knight or Salvation Mountain other than it's an impressive piece of art built by an impressively tenacious individual. I do respect the fact that he's invented a way of life for himself, and that obviously sprang from a vision that he likely couldn't himself explain.

These days, by most accounts the behind the scenes Leonard is ornery, cantankerous and, as one close associate put it, "just an asshole." This is a far cry from the gregarious, happy image presented for public consumption. It reminds me of dealing with the multiple personalities of media divas! I would have liked to have met Leonard 25-years ago before pop-culture and the folk art scene got wind of him. It occurs to me that the Bible's "Camel Verse" may indeed apply to more than just monetary wealth; perhaps it's yet another indictment of success and the ego as well?

Meeting Leonard did reinforce the idea that personal "greatness" is a concocted Crock o' Shit. I don't believe anyone is any "greater" than anyone else. The difference may lie in the willingness to get off one's ass and follow a vision, and not be crippled by fear. Maybe in that sense Leonard deserves their money; perhaps they pay him (and others like him) to compensate for what they're too afraid or too lazy to do themselves? 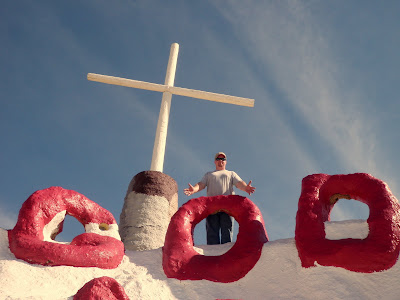 I won't bother with more religious/ commercial connotations, although I did see a 1993 LA Times article referring to Leonard as John the Baptist in the Desert! Do you suppose that generated some money? If there's one thing I've learned from other hitchers and the few panhandlers I've chosen to engage, "God on Cardboard" is the money-magnet waved over the wallet of the self-professed self-righteous.

BONUS PRICELESS ADVICE! NEVER give ANYTHING to ANYONE invoking the words "God Bless", "Blessings", or "Homeless Vet!" They're buzz phrases, like politicians exploiting child safety or advertisers shouting "Two Day Event" or "Breaking News."
Posted by Todd X at 5:31:00 PM