The Sit Down & Shut Up (SDSU) idea is simple to comprehend, and maddeningly difficult to follow. It's basically relinquishing control and trusting things to work out as they should, without our interference. It's also having faith that eventually hindsight will make things apparent. For me, these moments rarely seem obvious: forest thru the trees.

I first feebly tried articulating this idea after its practice led to a "standing-down" of sorts which led, directly, to meeting my brother, Mike. In many ways, the time between September and January was an extended period of "SDSU." I could not comprehend why I was returning home in September. I just knew that everything seemed to push me there. As is usual, looking back it seems glaringly obvious! Had I thrown a ego-tantrum and insisted on pushing forward to show off or "achieve" something, the remainder of 2009 would look much different. 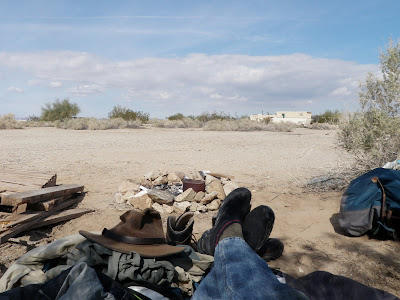 I wasn't sure what to expect waking up Sunday. Chris had tinkered with the idea of remaining in Slab City for another day or two to check things out and give an opportunity for things to happen. To his credit, as Sunday began he seemed content to just... relax. That's exactly what we did-- reading, writing, and occasionally chatting. All day. We had quite a nice spot in the sun; so nice in fact that we never left! I wondered to myself if that was a good idea, but had a difficult time motivating myself to get off my butt! 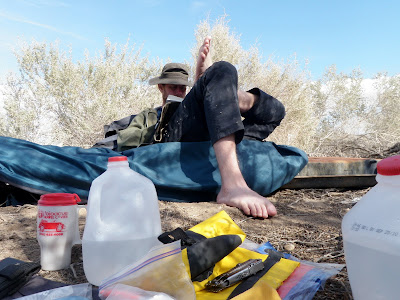 Toward the end of the afternoon, we were given a little nudge- in the form of another Slabber. We were planted partially concealed between some bushes- directly across the road and in front of his spot. When he finally noticed us, he wandered over, with a buddy, and asked, "What the fuck's all this?" claiming he wanted to see who was set up in front of his RV- as though he owned the entire lot!

Chris's Spidey Senses also blared and it was time to leave our little nest. There's a not-so-fine line between anticipating the good in people and playing the part of prey.

Around dusk, we went overland through the desert, deciding to pay Kevin a visit. It was well after dark by the time we arrived to the sound of his dogs and a flashlight in the face wondering who was out here wandering around! Kevin offered to introduce us the next morning to some people who may offer insight into the destinations of the seemingly never-ending string freight trains. The tracks are on the near edge of Niland; too convenient to ignore completely. Chris and I found a spot in the desert between Kevin's camper and Salvation Mountain, built a small fire, and spent the next several hours chatting beneath a bright, ringed moon. I realized for the first time just how trying the last few months had been for Chris and how much they had challenged his ideas; just as they had for me. 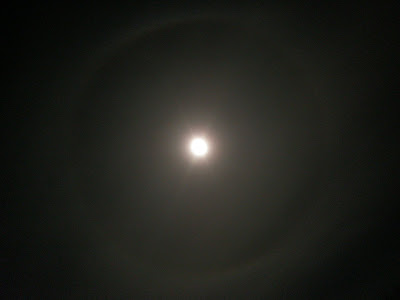 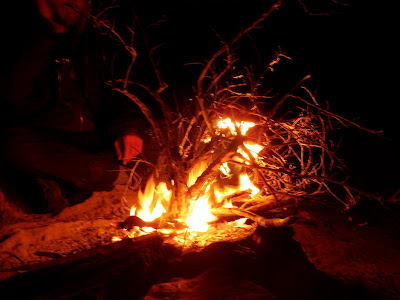