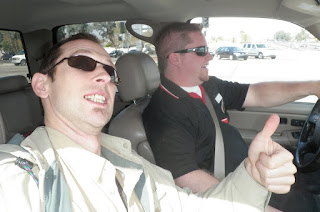 El Jefe liked the idea of a road trip out of Phoenix and agreed to take me to either Indio/Coachella, California or all the way to Slab City itself which is adjacent to the Salton Sea (the huge body of water in S. California that you can see on the map-and from space). The plan for Thursday: hang out after he got out of work. Friday morning: west along I-10 into California.

Jefe and I have an interesting history spanning all the way back to high school. He is one of the VERY few I have remained in regular, albeit intermittent, contact with since. It was on a drive from Des Moines to Phoenix to pay a visit to him in '98 that I acquired my  New Mexico Obsession. I had last seen him in July '05 after driving down from Denver. We had kept in only occasional contact until November, when we began to have regular conversations with scents of déjà vu: Jefe was asking himself very familiar questions. It was always a likely stop on any visit to the California desert, but regaining some of my Spidey Senses I realized that is all seemed to be pointing to Slab City via the Valley of the Sun for whatever reason. It was time to re-visit Phoenix.

There's something amusing about old, antiquated roles when I find myself reunited with old friends! It happened in Michigan last summer and on my '05 visit to Phoenix. This Thursday night was no different. In fact, we wound up at the same bar: The Dubliner. Several beers, vodka belts (a nod to Dennis), and impassioned, incomprehensible conversations later, I finally got to sleep (passed out?) around 5am...
Posted by Todd X at 2:57:00 PM