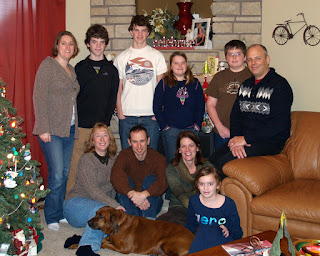 With most of the rest of the world, 2010 began quietly for us in Boise. Benefiting from her nearly 12-hours of sleep, Lynette was up and off to the Dilliards sale by 7am while the rest us were still snug in our beds...with Rum Runners and Champagne preparing to beat on our heads. I say "our" clearly knowing that I was likely the sole sufferer not named Mike or Lynette. I need the illusion-of-companionship at times. That being said, Laina too was unable to function due to a massive hangover. I can't even fathom how she drinks like she does. Perhaps a meeting is in order?

In place of venturing out, Lynette napped then decided to take down Christmas decorations; another one of those moments where I feel like a lost child at the mall or Neverland Ranch. (Too soon?) Since I was 11 or 12, I've had a tree exactly once; at the request of my ex-girlfriend, I believe in 1998! I seem to remember she was introduced to the fact that I was Cheer Challenged; saying something about "damaged goods." This from the woman who literally hid inside our apartment on Y2K. True story. I'd pay serious money to peek in her windows on 12.21.12! This decade began much better than the millennium, but I digress...

To be fair, it goes far beyond decorations and cards. As with my birthday, I don't "do" gifts. It's one of the things Laina, and everyone I've dated just LOVES... especially on V.D. (Valentine's Day). Like nearly everything, it's the principle of the thing. I won't jump-on-cue to show I care, especially when the "cue" is coming from retailers complete with reminders that it's "my duty" to "support the economy." Umm..."fuck you." I won't have my affections evaluated by a grand total of receipts, and I'm quite sure that EVERY kiss beginning with Kay ends with emotional Herpes. Remember that next month. 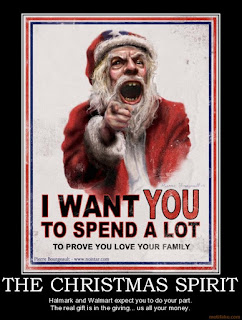 Beyond bribery and a taught sense of entitlement, there's an element of hypocrisy to the "holiday season." Poor people need help in March, too. Hungry families need to eat more often than just Thanksgiving and Christmas. 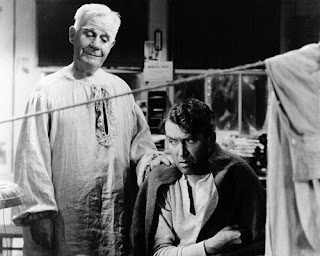 People still appreciate politeness and kindness in September. Except on my birthday. Your estranged mother may still want to hear from you in October. It's a Wonderful Life still plays on Memorial day, right George? Wait... do angels hibernate? It's the questions that drive us...

Sparing you a full-on rant (one I intended to write last month. Am I not merciful?), allow me to offer that self-interest driven, marketing-induced charity is NOT charity. 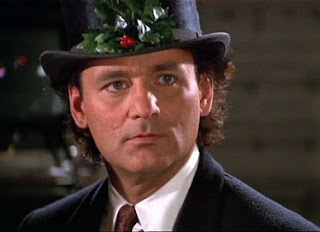 It's a business agreement with December's deity du jour.

You may be better off acting like the selfish prick you really are than pretending to be righteous. At least then... you're an honest prick! Suffice it to say I don't agree with the Francis Xavier Cross Philosophy...

With all this considered, there was yet another of these "strange," out-of-character moments as I watched Lynette & Laina pack ornaments. The notion of a "family tradition" set in as I gazed at Ben & Brads early childhood ornaments. Stability. Something to count on and look forward to every year. Something I literally have NO concept of. It was as though I finally learned something taught in 2nd grade; something that illuminated another barren wing of my psyche. All this from the most mundane of things. That theme holds, even in my metaphorical cave...

This is when I realized just how well Laina was taking to everyone. This was a familiar element to her, granted, but it went beyond that. I was oblivious to the fact that she was observing me, too. Being self-absorbed, the obvious had never occurred to me: this was the first time she had ever seen me in a family setting of my own. She'd met my mother and sister of course, but at best only on my shotgun 2-hour "in & outs." I discovered later that watching me interact with my sisters, Dave, and my nieces and nephews gave her a fresh, positive perspective. For a guy who prides himself on his observant nature, I screwed the pooch* on this one.

* No pooches were screwed making this blog...

Saturday came much too soon. We had another day-long drive and Laina worked Monday. Ben & Brad had gone to their dad's on Friday, so the seven of us left were off on Todd's Great Journal-Insert Hunt and a late lunch before Laina and I hit the road around 5pm. It was hard to leave. Casa Fogg holds many memories in 4-months and, as I wrote in September, this was another of those experiences that help people pass from simple siblings to being brothers, sisters, nieces, nephews, uncles...and Dave.

I kid the lawyer. It's reflex; I'm programmed to detest lawyers & politicians. Dave's an anomaly.

** FUN FACT: The first shirt I wore when I met Lynette & Dave in August read: "The first thing we do, let's kill all the lawyers!" Lynette's response, "I can't believe you're actually going to wear that shirt in this house." After an emphatic, "Oh, FUCK!" I turned about 40-shades of red and borrowed the "Michigan" shirt you see in the pics... 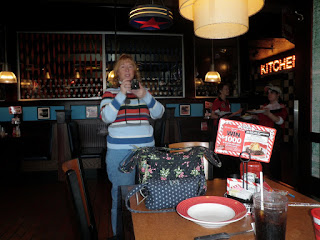 During lunch, it dawned on me that Lynette, Shelly, and I had spent next to NO time talking about Ward & The Hens. I pointed out, more to myself than aloud, that I saw this as significant. It showed that there was more focus on the future, rather than just bitching about the past. I was relieved that the three of us could relate beyond simple idle gossip and dime-store Drama. 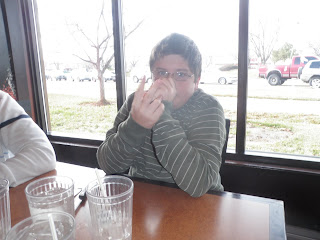 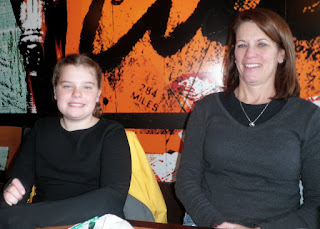 Part of that future continued to be speculation about "Rallying 'Round the 'Black Sheep'" in Boise. Shelly seems to have gone from considering a relocation, to determined to get it done. Laina and I had talked about it a bit more over the couple of days there, but it always came back to the same thing: "When am I going to be done with this?" Any talk of relocating from Santa Fe begins and ends with that question; one of those which has no answer... much like, "How can an attorney sleep at night?"

I kid the lawyer.

Laina finally distracted me enough with coffee & fudge to get us moving, and after hugs, handshakes, and a quick REI exchange-stop, we were on our way back. The weather cooperated nicely to Salt Lake City. Rather than returning the way we came, at the last moment Laina inexplicably decided to take I-80 thru Wyoming and Denver! Why? I have no idea. It was as though a confused, misguided navigator had influenced her to take that exit. I'll spare further analysis and move on, but whatever the reason, after we had gotten thru the staggeringly gorgeous Wasatch mountains east of the city, a familiar theme resumed. Snow. Again. It would appear that the ghost of Joseph Smith was holding a grudge and that he was really bored... because it would only snow when I drove!

A nice part of Wyoming was stopping in Rawlins, revisiting the truckstop where Doug had dropped me off and I'd met Cesar in 2008. Next was the Laramie-Cheyenne snowstorm...which stopped as soon as Laina started driving! Despite having 75mph speed limits and one-way traffic the whole way, because of the snow it still took us 24-hours to get home. We were both exhausted, and Laina was getting sick. She did call in to work after all!