Monday morning and early afternoon was spent working and trying to figure out this next step. Eric offered to let me stay at his place for the night so I could catch the 10:30 am bus to Santa Fe on Tuesday, if need be.


Some people may be a bit confused, and with good reason. I had a plan (ha!) when I arrived in Denver from Idaho almost a month ago, but somewhere along the way, the inspiration and motivation to go to New York City and Maine left me, if it was really ever there at all. I have never been a big fan of NYC, and have already spent a small amount of time there, in Brooklyn during the anti-war march in 2003. I have no interest in enduring a “San Francisco on Steroids” experience. In retrospect the idea was probably a temporary sedative to allow me to focus on the real purpose of this interlude. I do want to see New Hampshire and Vermont, and I will. I just don’t feel a compelling urge to do it now.


So, on went the day. I had pretty much resigned myself to the fact that I was returning to New Mexico for lack of a better plan, figuring that I could get to work on stashing money for this winter’s trip south.


The problem was that there was only ONE bus from Denver toward Albuquerque per day, when there used to be FOUR, and I‘d missed it. That meant I had to hang out at Eric’s, or in the woods, until morning. I tried to contact Greyhound to inquire about the AAU “Americanos Americana” line that they list on their website. It goes to Albuquerque, with a stop in Santa Fe, at 6:30 every evening. However, that route does NOT seem to offer the option of getting OFF the bus in Santa Fe! I got no answer during the entire 40-minutes I tried to contact them. This coupled with Greyhound’s blatant disdain for any other kind of customer service, and the fact that they were raising their fares and cutting routes …I became irritable. (Shocking. I know.) I used to enjoy Greyhound. Yeah. I seem to be the only one! Now it just seems like cattle car service.

I finally gave up and decided to try to call my trucker friends, Ken and Cesar, to see if by chance they were near, or would be near, Denver. I got a hold of Ken and was amazed, shocked, and floored by the fact that he was back in Idaho, and on his way back to Tampa. Through Denver. THE NEXT DAY. He told me that he was headed through Nashville to drop off a load, and that I could either ride there, or all the way to Tampa if I liked. I had no clue what to tell him; he said to get in the truck and decide on the way.

I was NOT returning to Santa Fe. This phase of the trip would continue.

The term coincidence was mentioned, and then brutally mocked. This made this Denver ‘experience’ feel like a longer, drawn out rerun of McCammon, and not just because it would again be Ken that I was leaving with. Denver was a bit of a struggle this time, mostly of my own cause. I spent the day stressing about ‘what I’m going to do’, and again, the solution presented itself in its own time. I didn’t talk a lot about this, but it occupied my mind for most of the night. A lesson I just can’t seem to learn.


Ken set into motion a strange, quick moving chain of events. I had already finished packing and arranging a ride with Eric to his house, then Chris and I devised a plan where I would serve as a Bivy Guinea Pig. For those that don’t know, a bivy is essentially a waterproof sleeping bag cover that also covers your head. They usually weigh about a third to a quarter that of a normal tent, and take MUCH less space. The downside is, of course, that you can’t sit up, nor can you place the pack INSIDE with you, meaning that a more elaborate rain cover system is needed to keep it from getting waterlogged in the inevitable downpour.

We walked down to REI and put an Outdoor Research ‘Alpine’ 4-season bivy on his credit card. REI’s got the best return policy. If you’re not satisfied, for any reason at any time, bring it back for a full exchange or refund. (I pity the price gouging ’local’ outdoor- store in Santa Fe when the REI finally gets built!) I could take the bivy east, get rained on, and if my review was satisfactory we would get another before South America. If it blows? Return it with no damage done. A fine plan indeed.

I had called & sent emails to two friends: Kim in Nashville and Nikki in Tampa. I had a pretty good indication of how this was going to go after I called Nikki and someone, who sounded an awful lot like her, answered but said that they weren't Nikki and didn't know who she was! I had left Kim a voicemail, and she returned the call on the walk back from REI. She said I could stay with her for a day or two on Nashville, and to just let her know if I decided to. Nikki emailed me back later claiming that her number had NOT changed, yet no one had called and she didn't know what I was talking about! O...K then.

Removing the tent made a huge difference. Suddenly the backpack was not only lighter, but suddenly cavernous! I could now downgrade the pack, but thought it better to have too much room than not enough. Also, I could add another pair of pants and STILL be lighter. As I was about to leave for Eric’s, we weighed the pack in at 43#. 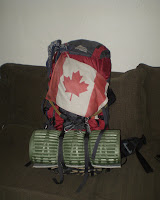 Considering I left Denver on May 20th with the same pack weighing 55#, I’m quite thrilled. I also discovered that, for the first time since high school, I was below 160# myself! I have dropped 45 pounds in the last 15 months, and 30 in the last four alone. Yes…I AM proud, thank you.

Chris and I said our goodbyes and it was off to Eric’s place after a trip to McDonald’s and to the Skylark Lounge on Broadway for some PBR and a final rantfest. This is in the neighborhood I lived in when we left Denver last summer, and it was nice to be back there hanging out. I love Capital Hill too, but it’s a bit ‘hip’ for me.

We got back to Eric’s place, and since Ken wasn’t going to be arriving until 4:30-ish the next day, I had one more day to work. I slept on his floor…and like a stone.
Posted by Todd X at 5:39:00 PM