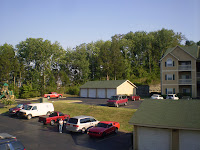 Yet another day of unbearable excitement, the kind that makes for compelling travel- writing. I left Kim's house.

We transferred home- base from Kim's to Rich's place in Goodlettsville (NE of Nashville). They both had to work, so I hung out with McCarty and did more 'research' on Chris McCandless, looking for more detailed information that may indicate, as I've long suspected, that there is more (or less) to that story than that peddled by Jon Krakour. Always seems to be the case. 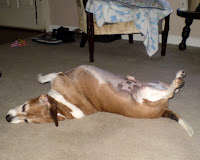 I did not realize it at the time, but it happened to be the day, August 18, that they estimate he died. Of simple starvation. There are aspects of this story that, when you think about them, simply do not add up.

It is quite suspicious that Krakour would fail to mention in the book that McCandless DID have a map, instead of cleverly saying "... if he had had a good map." Alternatively, Sean Penn failing to fully- disclose his employment history on the road. Penn conveniently omitted how long he actually worked at McDonald's in Bullhead City, AZ (not Burger King), and glossed over the fact that he worked with Westerberg long enough to earn $1,000 AFTER he'd met 'Ron Franz', and immediately before he set off for Alaska.

These are NOT minor details or meaningless omissions. McCandless has reached Anti- Capitalist Cult Status in no- small part because Krakour and Penn "took the liberty of bullshitting you.”

The fact strikes me that there are legions of kids whose ideas are coming from his "story". They are burning their money and social security cards, and chopping up their credit cards (not a bad thing). Then they are trying to live on dandelions because they are trying to emulate what amounts to a fairytale.

The full story would indicate that he failed at living sans- cash. Why else would he have worked so much, if as Emile Hirsh says in the movie, he "didn't need money"? Is making Quarter Pounders THAT satisfying? A question Penn chose not to address when he almost deleted one of the more interesting aspects of the book: Bullhead City. Did McCandless conclude that living without money was either impossible, or just not worth it?

I wonder if he experienced a bit of the frustration I did, and in the end concluded that it best to "invert" the system. Working just enough to provide necessities, while eliminating the 'illusory' necessities (comforts) as time went by.

Maybe he got to the point where he was frustrated by a lack of ability to be as self- sufficient as he would like, and decided Alaska was the place to go to get that knowledge. Or die trying.

Believe me, this is NOT just idle speculation for speculation's sake, although we obviously will never have any way of knowing. I have experienced similar thoughts and frustrations, and find it maddening that these 'entertainers' intentionally ignored them, needlessly corrupted a story that would have been just as remarkable on its own, then marketed it (Krakaur) as fact. Creating the mythical- superhero living out the Heroic Epic helps sales.

I doubt McCandless had any preconceived ideas about becoming a poster child for anything. He did what he did because he felt it was the thing for him. I have never seen the actual journal entries published-- anywhere, and know of no one who has. Why? What I do know is that, if my thoughts are correct, it could have served as a better example than propping the kid up as some sort of superhero, whose Kryptonite happened to be bad roots. This is why I've tried to include as much of the not- so- flattering reality as I could!

Hero worship and idolization is folly. For whatever reason, we seem to need examples of people who do amazing, almost impossible things. We need to look up to people who accomplish things we believe we could never do, then deify them as means to an excuse as to why WE should not even try. "Only ‘Saints & Superheroes' accomplish anything worthwhile."

I've been guilty of this as much as anyone, but the more I learn about these prestigious pedestal- occupants, the more I see that, with few exceptions, they belong right down here with the rest of us. We all have doubts, faults, neuroses, hypocrisies, and skeletons in the closet. No one out there is superhuman. HOWEVER, if that is true, then we all have the SAME capacity to accomplish 'great things' anyone else has.

I cannot get past this. Why? Is it because if we take away their perceived 'superpowers', we are left with the stark reality that we too are capable, and perhaps that injects uncomfortable senses of responsibility, to ourselves, that would be more comfortable to avoid?

Heroes are fabrications. In my not- so- humble opinion, we should view them as examples of ourselves, complete with OUR faults, but the ability to transcend them. I doubt that most even thought about transcending shortcomings. Most, I suspect, are driven by something they simply 'must' do. They probably had no choice but to follow it. Is that superhuman- courage? Or something else?

Who knows, but do me a favor? Consider pulling your heroes back from their pedestals. Try being your own.

That was pretty much my day. Not much for singing happy- songs, but interesting nonetheless!

I decided to go to a Tennessee Health Care Campaign meeting with Kim on Tuesday evening, so I would be staying until at least Wednesday. I really wanted to see what exactly was going on at a grassroots level, but not optimistic that I will come away happy. I hope there is something more than "progressive", idealistic chit- chat and something that resembles courage; or at least a little anger!