Eric and I were up and on our way at 9:30, running all over the Denver metro basically tying up loose ends. We stopped at a Sprint store so I could get a car charger for my cell phone so as not to repeat the events in northern California with Eric & Marine. The damn thing cost me $25 and I knew I would live to regret buying it.


The work- day was uneventful, and I heard from Ken at about 2:00 letting 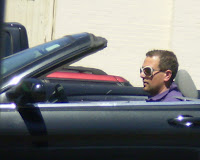 me know that he was in Laramie, WY as we’d arranged the day before. Laramie is maybe 2 ½ hours from Denver, and now that I had a good idea of when he’d be in town, I could begin to plot a place to meet him.

I had hoped to be able to get to a convenient place on I-70, so he would only need to exit momentarily to pick me up, and then return immediately to his route. I was leery of that plan when, not knowing that part of Denver well, I couldn’t pinpoint locations that I was certain would be hassle- free. I decided on I-25 and 20th St., up the street from Coors Field, because it was maybe just ½ mile past the I-70 interchange, had a stop light, and he could just re-enter I-25.

Once that was set, I repacked again, foolishly

eliminating food and rearranging the pack’s balance for the hike, via Light rail, to 20th St. Eric and I settled up on money, and much to my dismay I was forced to evaluate just how much money I had spent while in Denver. It isn’t a pretty picture. After the rain fly, I was leaving with significantly less money than I should have been. The beer wasn’t THAT good.

Eric and I said the goodbyes; I loaded the pack on my back, and set off. 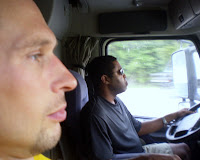 For the first time in nearly a month, I was traveling again. Officially back on the road. There was no euphoria this time; no excitement for the unknown. I KNEW what to expect. In that sense, this phase, Phase #3, felt MUCH different. I was no longer the adolescent exploring the woods. I knew what was in the woods, how to handle it, AND I knew how what I would see from the woods would effect me. The lack of that excitement was a disappointment, and the fact that I was not experiencing the same energy- lift I had at the tracks after the Rockies game was surprising. It felt like I had just woken up in the bushes somewhere and was resuming the trip.

I decided to forgo paying the $1.50 fare for the ride to Union Station, remembering Thoreau’s “get what advantage of her” line in Civil Disobedience. I felt like quite the Anarchist as I rode the familiar route downtown. I was in a bit of a hurry, having spent more time chatting with Eric than I’d planned to and concerned about missing Ken in case he was early. 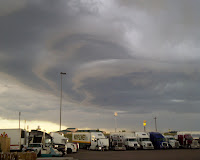 myself back in the old familiar spot: the ramp. I arrived at about 4 and as I waited, a panhandler returned with his handy little sign pronouncing his abstinence from both drugs and alcohol, saying he just needed “a little help“. Todd was skeptical.

The bum was not pleased by my presence. I wasn’t hitching, holding a sign; just sitting there. He must have thought that made him look bad because after five minutes or so, he shouted across the exit, “Are you just sitting there for the hell of it or waiting for a ride?” I answered that I was waiting for a ride, but his demeanor and blatant stares were by now bugging me. He was acting as if his urine-soaked Jansport book bag marked his “turf.“ He apparently didn’t hear me, or was feeling belligerent, because he asked again. This time I replied, “I love the fucking views here, I might just have to stay all night. Is that OK with you?” 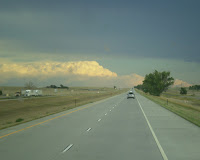 Our plan had worked perfectly. As I climbed in the cab, I saw my new ‘friend’s’ look of utter amazement. Here was a guy who had just been sitting there now climbing into a semi. Not so astounding, I know. But HE seemed to think it was. I just waved as we drove off.

Ken and I shook hands, I explained the situation with Dufus, and we quickly settled back into our roles from last month. We got reacquainted as I settled in for the ride to Limon, where he was going to stop for the night since he’d been driving from Idaho since 5am.

Shortly after I got in the truck, the indecision concerning my destination was resolved. Ken has a friend in Chattanooga, TN who wanted a ride to Tampa. I could ride to Nashville and see Kim, and he could pick Jay up a couple hours down the road. Simple. Easy. Go with it Todd… go with it. 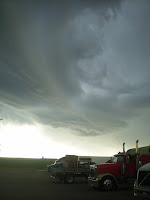 I went with it.

We did stop at the Flying J on the far east end of Aurora, and the cashier asked Ken to take a box of urgently  needed fuel tickets with him to Limon, since they were running out, saying we’d get free dinner in exchange for the box occupying his floor. Quite a deal.


The ride to Limon was typical eastern Colorado. Not a lot to see save some dramatic storm clouds on the horizon that got more intense as we moved further southeast.

We arrived at about dusk and feasted on

Steak and Salmon. The manager had apparently only intended to give us the soup n’ salad bar, but had neglected to tell Ken this before hand. That led to some mini-drama when we went to leave, but the acting manager handled it diplomatically.

We settled into the double bunked cab for the night and watched “10,000 BC” on his little DVD player 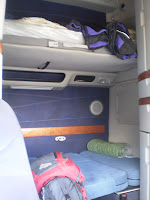 while I wrote in my journal. The dominant themes as I reflected on the past couple of days were the ‘coincidences’ and the fact that I was feeling very little emotion about being back on the road.

I also was encountering Che’s 'split moment' phenomenon; feeling slight melancholy about not returning home, and also fleeting, inconsistent excitement stemming from the recall of past experience; experiences that were precluded by similar circumstances and emotions. In short, I was having trouble unplugging from The Matrix, and reestablishing a solid connection with…you choose the term! It also dawned on me that today was the two month anniversary of leaving Santa Fe for Santa Barbara and I was heading even further away this time. Maybe #12 is lucky for me!

Ken and I set the alarms and got to bed ready for a day full of Oklahoma.
Posted by Todd X at 8:00:00 PM