Saturday it felt nice to just chill out and do nothing. Chris and I finally managed to get to the grocery store for food in the afternoon, thankfully without incident! On the return, we crossed paths with a friendly homeless guy hanging out in an alley with his little dog. We both commented that he seemed like a decent guy and noted that he was one of the few who will chat with you without the conversation turning to what we could give him.


Chris worked, and I wrote, until 10:30 then it was off to Barracudas to relax and have a bit of fun. So much for not drinking. It was an enjoyable night highlighted by a conversation surrounding the definition of ‘art’, on which I won (!), but we agreed to disagree.

After the bar closed, we were outside chatting with some people we had met and gawking at 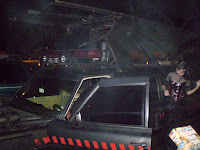 what appeared to be a souped up hearse, driven by some characters from a Gothic novel. Quite interesting. As we were about to leave, we saw the homeless guy from earlier. Chris began chatting with him, and before I knew it, had offered him a place to stay for the night.

That Friar...he had offered Catfish a place the week before as well; it is his way of returning the generosity he’d found on his cross country walk. I didn’t think anything of it. Sounded like a nice gesture and a good way to generate some good will in the universe. I also remembered the alley earlier in the day, when he was content to chat with us and not expect anything. I had a good feeling about the guy. Ron was 50, seemed to be pleasant, didn’t reek, and had an ornery little dog. A perfect combination for a house guest! 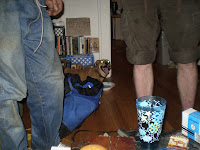 We headed back to the Friary with Ron and Bella (the dog) in tow, and broke out the remainder of the Jim Beam gallon Chris has had since May. We all drank up, chatting, while Chris and I were getting to know Ron. He was from so I felt a kinship to him in that regard and he seemed to have a Christian background; spoke of “Jesus” quite often.

We asked him why he was living on the street, and he said it was because he was ‘tired of all the bullshit’. He did not seem to be an addict of any kind, but did like his Jim Beam.
I began to notice some things that seemed odd, however, when I began to press him on some of his opinions. He would not elaborate. Just rattle off the same answer again. I pictured Eric’s analogy of the punks selling speaker boxes with no guts inside! That was enough for me, and I essentially shut myself down, and let them chat until it was time to pass out. Then... 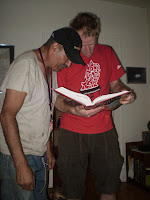 I had been giving Ron cigarettes since he had been there. No big deal, but then out of nowhere he decided to reach over, grab my pack of Pall Malls, and start to put them in his pocket. I asked him, “What the hell do you think you’re doing with my cigarettes?” He responded that these were HIS cigarettes, Goddammit! I took them out of his hands, forcibly, let him know that he was full of shit, and asked him what kind of idiot he took me for. Again… he couldn’t elaborate. Just to further explore what he was all about, I reached over and picked up the glass of Beam & Coke Chris had poured him. Christ on His Throne! “Hey, that’s fuckin’ MINE!” I had my answer.

Chris didn’t see any of this going on. I was going to let it go, to try to practice my new policy of forbearance. However, after I laid down, I realized that if this guy were going to try to steal my cigarettes with me SITTING there, what the hell’s he going to take while we’re asleep? My backpack and everything else I had brought with me was at the foot of the couch! I pulled Chris aside, told him what had happened, and he agreed that Ron had to go.

Chris, being the Divine Friar he is, gave Ron a shot at redemption. He asked him about the cigarettes and, of course, he said he did not try to take them. When I told him to look me in the eye and say that, of course he could not. It is about here that my blood began to boil. Ron had been lucid all night, standing and walking just fine, then suddenly he was too drunk to talk! As this little exchange continued, my voice steadily got louder and I was getting angrier by the second. The one thought I remember having is that THIS is the EXACT stereotype I was fighting on the road. I was assumed by many people to be THIS character! I heard echoes of Eric’s sentiments on the welfare state, how people will gain a sense of entitlement. Then I heard the hippies saying "Oh, they’re ALL just down on their luck and need a second (or thousandth) chance" with the upward inflection on ‘luck’ and ‘chance’ of course. The longer he sat there, the angrier I was getting.

Chris finally told him he had to leave. It was then that Ron, mysteriously, lost all use of his legs. When he tried to stand, he crashed into the makeshift bookshelf and onto the hardwood floor with a loud thud. Then, he couldn’t stand up from there! Chris gave him the benefit of the doubt, but to me this was too coincidental and convenient and began telling him so. I believe my response to this was “Oh, just get the fuck up, and get the fuck out of here.”

Upward inflection on "fuck" and "here". 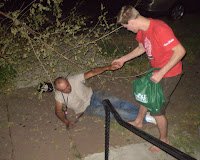 After some effort, Chris finally got him out the door, down the steps, and outside where Ron, again, mysteriously lost all motor functions. He crashed onto the sidewalk, and refused to move. His dog was not any too pleased about any of this, and I tried in vain to get her back on her leash so she wouldn’t run off in what was left of the night.

Ultimately, we decided that if we left him there at least we could keep an eye on him from the window. That solution lasted maybe 3-minutes before Chris chose to go back down and try to get him back to his couch. I declined to take part.

Chris was gone quite a while, and I began to get a bit concerned to the point of getting up to go looking for them. When I heard the door open, and just Chris walked in I was quite relieved. Apparently, Chris had gotten him to the couch when Ron’s motor functions just as mysteriously returned, and decided that THIS couch was not quite the proper place to be. He set off for a few different places, and Chris in his concern stayed with him until even he was fed up and had come home. Thus ended the Saga of Ron.

I had no idea how to digest this, but it occurred to me that many of the conservative leaning friends were correct. At what point does a person have responsibility for themselves? When does "‘I need a little help" turn into entitlement and a "get everything I can" mentality? How many of the ‘homeless’ people we see are simply looking to exist solely on handouts in an effort to avoid personal responsibility? Charity has its place, but so do common sense and the ability to see through a swindle.

Chris and I discussed this for a short time before we passed out with the sun already in the sky. The only conclusions were that we are probably a good counterbalance to each other, and that Chris was right when he asked Ron “How many people try to help you out after you try to steal from them?”

Sunday consisted of nothing but recovery. We talked a bit more about Ron and a few other things including more about . I touched base with Eric regarding work on Monday and that was it.

Monday was again mostly uneventful. We worked almost all day, then Chris and I walked to a video/CD store where he bought, then we watched, “What the Bleep Do We Know”. One of my favorite movies, and one that inevitably triggers deep discussions! However we both, and Eric too, had been noticing a type of mental fatigue. Chris and I spend most of our time in discussions, and Eric and I do the same thing, all day. It seemed that it was starting to wear all of us out! A good thing I guess.

Despite the fatigue, we talked about the movie, the Latin America trip, and began to do some research on what to expect once we got to . I also had arranged tickets for a Rockies/Nationals game at Coors Field for Eric and I. THAT would turn out to be quite eventful, and even more eye- opening than the weekend had been, and it would begin to illuminate the door out of !

Ron was obviously the Event of the Weekend, but over the past couple of weeks, as you have probably noticed, Chris and I have been having more in-depth conversations about this winter’s trip south. I have neglected to detail much about this intentionally; I wanted to see how the ideas developed and whether we would have second thoughts. It is a much bigger decision for Chris because it means abandoning some of his plans and expectations in favor of the nomadic lifestyle again. Over the last 2+ weeks, it would appear, and he has stated, that this open ended adventure seems to have almost set itself in stone. It feels right; synchronized.

The “Rest of the ” trip outline and philosophy deserves its own space.
Posted by Todd X at 11:02:00 PM