Tuesday was a defining day, although I am not sure of the definition provided. 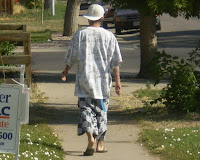 Work was fine, and I had emailed my people at Coors Field to arrange tickets for the game against . If I were to pick ONE team I would LEAST like to see, it would be the Nationals, but ya can’t beat free.

I really did not feel like going to the game once I had relaxed after work, but knew that would change once I got there. Eric picked me up at about 6:00 and since he parked about 10 blocks up the street, we had time to chug a beer or two before we reached the “$6.25 Beer Zone”.

I had two extra tickets, so rather than let them go to waste we decided to find people in line to try to save them some cash. I never sit in these seats anyhow; I have a friend who is the usher in the section behind my old camera well and he seats me in some of the vacant box seats behind the dugout whenever I go. 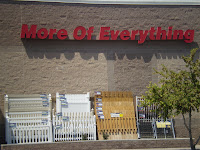 I thought it would be nice to hook up a father/son with these Row-5 seats as a nice surprise if Eric couldn’t find his "hot 30-year olds"! We had arrived late, so there were very few people to fit the bill. The last thing I wanted was to hand these out to some drunken fool, or some backward hat wearing Frat Monkey, in case we HAD to sit there for whatever reason.

We were about to give up when I looked across the street and saw a guy from suburbia trying to buy scalped tickets across . The scalpers had always driven me batshit when I worked at Coors. Whenever I would walk toward the stadium, they’d pounce. “Got any extra tickets man?!?! You work here dude…you can get me some tickets, brah” (‘brah’ is ‘scalper’ for ‘bro’ apparently; they all say it)

This was my opportunity to piss them off just a small fraction of what they had annoyed me. I bounded across , and asked the suburbanite if he wanted two free tickets in Row-5. The look on his face screamed “Hell yeah!”, but before I knew it another Peruvian looking scalper was in my face saying “I do!! Duuuude! I want em!!”, and in the process reaching across my body, in front of my face, trying to grab these tickets! Oops.

This was much worse however. I have no recollection of exactly HOW I got in this guy’s face, yelling, screaming, and completing a full time warp back to my Redneck Youth. However, there I was none to nose with this idiot telling him to “back the fuck up”, “Stand down motherfucker”, and “step the fuck back”.

Lots of ‘fucks’. None with an upward inflection.

I could see the mental evaluation process in his eyes. Should he lip back, or let this one go? First, it was amusement because, apparently, he thought I was kidding. Then there was “oops, I messed up”. I believe he saw A LOT of rage in my eyes, because then I could see much fear in his. I had him. Todd was an Honorary Redneck again.

When I saw his fear and realized how close I actually was to fighting this guy, I regained control of myself. I literally have very little connective memory of this exchange, until I heard his fellow scalpers, who wanted no part of me themselves, egging him on. They used the time honored trick of questioning his manhood. He was a “pussy” if he didn’t… get his ass kicked! Pure Michigan in Denver! Then his posturing changed.

All of the sudden he appeared to WANT to fight again, and told everyone so, as he was running away from me! Sprinting. Can you picture the comedy of a grown man talking trash while running away from you? My blood was still boiling rapidly, so I began to pursue him. My agitated reptilian mind was telling me that this would be a glorious way to release pent up frustration. But common sense got the better of this debate. Either he did not want anything to do with me, and this was how he could save his “Scalper Cred”, or maybe there was a weapon stashed wherever he was running. Whatever. Both scenarios told Todd to turn around and just go enjoy his ballgame. Therefore, he did.

The suburbanite/gentry-type man had a look of shock on his face when I walked back across the street and asked him if he still wanted the tickets! Unfortunately, so did his kid. He was probably eight or nine, and I had completely forgotten he was there during all of this. Eric not-so-gently reminded me by informing me that “Well, you freaked that kid out, dude.” I felt like an ass. In all honesty, the kid (and dad back at the office) now has a hell of a story to tell his friends later, but still…

The adrenaline rush was astounding and familiar. I was literally shaking like a leaf in anger as we walked toward the gate, and Peruva-punk followed, still running his mouth…on the other side of the street. I blew a kiss to him as I obnoxiously waved my tickets high overhead. He reminded me of the dog behind a fence who WANTED to do SOMETHING, but just couldn’t quite climb it.

I said hi to a couple of friends I had worked with, more or less just to calm myself down. That helped a bit, but now the realization had set in that I was actually in quite a precarious mental state. Telling a Greenpeace Puppet to fuck off is one thing. Some might even say admirable! This, however, was something else. Dangerous. Foolish. Immature? All of the above?

Eric had yet to see that side of me, and I expected him to either laugh, smack me in the head, or never speak to me again. He knew about the other things that had happened however, and had some remarkable insights to offer: the same insights as Chris. I had no tolerance for any unnecessary hassles associated with being ‘plugged back in’. I’d been literally in survival mode for over a month, and apparently had liked it. I literally felt like I was short-circuiting when I tried to readapt to contrived priorities. I felt caged. As Veronika put it in : I’d “tasted the blood”.

As we sat there and watched the game, it began to dawn on me that I really needed to move on. It had been three weeks since I’d ridden into with Ken, and it was obvious that I was seriously disturbed by being there. I concluded that it did not really matter where I went, but it had to be soon.

We finished watching the beat the Nationals, and then walked adjacent to the train tracks back toward the truck. The parking lot spans 12 city blocks, so we had ample time to survey the yard, and chat.

A funny thing happened during that long walk; something not so surprising. My energy level skyrocketed, my mental awareness sharpened, and I felt… oddly…at home. Everything I had been missing since I had returned from the road. Smokers will get the metaphor that this was to my brain like the first cigarette after going 2-days without. That was telling in the sense that it seemed apparent, all of the sudden, that I was seeing a mental manifestation of what Chris and Eric had been telling me: "get the hell out of here"!

On the way back to The Friary, I decided that I really needed a drink. Eric had decided not to work Wednesday, so I called Chris and we arranged, against my better judgment, to head to Barracuda's. I just needed to chat about this stuff and did not want to be in the house caged for the night.

Remarkably, the night was rather uneventful, but productive. We discussed alternative ideas about the temper flares and even talked about the possibility that tonight’s example may have been The Road’s way of tapping into something a bit more primal than I am used to thinking about: a return from the Laws of Man back to the Law of Nature. The Anarchists in the audience will love that! When I thought of it in that light, it didn’t seem so bad.

Much of the debate leading up to this trip had a lot to do with talk v. action, and killing duality by living your ideals as opposed to those imposed upon you. I will post a lot of that when I get more time, but these three weeks has seemed to bear that fruit.

Another series of discussion went along these lines in that the common theme with these outbursts have centered on manipulation. I was not yelling solely at the Greenpeace Puppet; I was yelling at the puppet master as well. The scalper had gotten to the brink of violence because he had gotten physically in my space by reaching in front of me, and was trying to protect his ‘Manipulation Zone’ as I saw it. There may be a small bit of rationalization in there, but as is usually the case, there are probably elements of truth in all of this. Either way, it was becoming clear that it was time to move on. Remember the two day (week?) rule? HA!

We went from Barracuda's to the Park Tavern for a couple of drinks, just because I’d never been in there-even during the year that I lived in Capital Hill. Amazingly, considering my initial mental state, we did not drink much and got to bed relatively early.

Wednesday was a chill day. Not much of anything outside of walking to Office Depot to get business card paper for the next leg of the trip. While there, I decided to buy Chris a stick of RAM for his laptop as a thanks for letting me stay.

That took an extra trip, but it was worth it. His computer really needed the added memory! I spent the rest of the night writing and dwelling more on the previous night.
Posted by Todd X at 10:03:00 PM