Thursday August 7th was yet another fascinating day, with glimpses of a possible future that is beyond comprehension both physically and metaphysically. Unfortunately, I cannot elaborate right now and will have to attempt a literary tap dance.


Eric and I worked until about 2:30, then it was the now familiar routine of chatting with Chris until he was off to work at 4:30, then writing and chatting on the phone with Laina until he returned at 10:30. Eric had called off work for Friday, then it was off to Barracuda's to discuss the significance of this new possible course change.

Things got VERY strange while we were there. One of the regulars, an acquaintance of Chris, was driving out to the next morning and asked me if I wanted to ride along. She was venturing out to visit friends, and said I could ride if I would simply keep her company and try to keep her awake. She had also committed to taking a guy from Craigslist’s Rideshare toward and said that someone else in the car would put her at ease. We discussed it for a short time, and decided that she’d drop me off at Hwy. 1, and I’d start south toward Big Sur, Cambria, and ; the same route I’d JUST traveled! The plan would then involve her picking me up on the return trip and taking the PCH toward LA, then I-40 and I-25 in , then back to .

What an odd plan this was! It seemed to be an alternative, however, because at this point I was all but certain that I would be leaving on Saturday and had not really decided on a destination. I had been wavering between heading east, my original plan, or returning to to begin preparing for the winter’s trip. This would seem to accomplish a bit of both; a bit more traveling and getting me home to settle in gathering nuts (both kinds) for this winter. And, I loved how it came out of nowhere!

She sent her friend Drew over to size me up while she chatted with Chris, and that’s how we closed the bar. I drank a bit more than I wanted to, and got rather lit up! I drunk called Laina to let her know what had developed and got to bed about 3:30.

Chris’s friend was supposed to call at about 9am, and if she didn’t I was supposed to call her. When I awoke at 10:15, hungover and second guessing this plan, I decided I would leave it up to her. If she called, she called. If not, I would probably be better off. Just in case she DID call, I got up and gathered my gear then went back to sleep. Had I heard from her, I would have gone. But, the more I thought about it the less I wanted to retrace old steps. The thing that appealed to me was possibly going to see my friend Amber in when she returns from WWOOF-ing in , but I don’t even know when that is. As the day went on, the happier I was that she had apparently changed her mind.

The afternoon sucked. I felt terrible, and actually slept most of it away. I guessed that I had drank more than I had realized because this hangover was entirely excessive for what I remembered!

Chris had the day off and had spent part of it with Angela, and the rest by himself at the park reading. I finally woke up at about 6:45 when he returned and by then I felt human again.

As we sat there chatting about the night before, with me learning that his friend was ‘kinda freaking out’ about me riding along, and that in turn leading me to wonder “why bother to suggest it then?”, we noticed that it was getting radically darker and that it was beginning to sprinkle with these HUGE drops of rain. Sweet!

Over the last month or so, has been sweltering. There was a record set for consecutive days over 90-degrees; something like 24; and next to no significant rainfall over the last couple of months as evidenced by the dead lawns Eric and I had been maintaining for the banks. 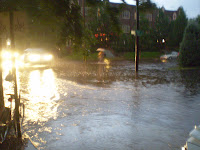 Tonight Mother Nature would begin to restore her balance.

As it began pouring, both Chris and I commented that this reminded us of those storms we had both been used to out east. Real thunderstorms where you lose power for a few hours. While the power didn’t go out, I began to notice that more and more people across the street were flocking to their windows to take pictures. That seemed a bit odd even for this. When we looked out the window to see why, had turned into a raging river flowing west toward Lincoln/Broadway and the S. Platte River! Sweet!! It was quite remarkable in that not only was it flowing, but also the curb-sides were completely submerged. 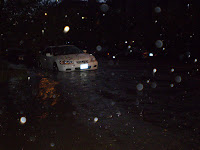 We watched for a few minutes only then realizing that it would be great fun to go out and play in this! Not only that; this was a perfect opportunity for me to test a lighter pair of rain pants that I was considering.

We quickly donned the gear and stepped outside to survey the flood. 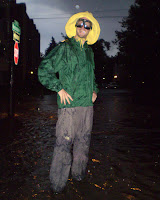 Great fun indeed. We got some neat pictures, talked to some of the neighbors, and even found a guy selling a kayak that would have been useful!

The weather did not last long enough to suit us however, and while we were trying to decide where the most dramatic scene would be, it began to wane. We set off for the coffee shop to get coffee, decided to rent ‘Motorcycle Diaries’, then went to King Soopers to grab food, since we were already there.

As is typical for , the street was almost completely dry when we returned. 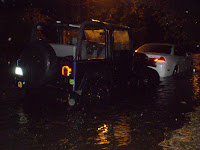 Water, and snow for that matter, does not seem to hang around long. When we got back to The Friary and prepared to watch our movies, I checked the 9 News website and learned that Cherry Creek had flooded to the point that 6 people, who were on the bike path at 6th and Broadway, had to be rescued! Just 6 blocks from here! We should have gone that way! Rats.

The rest of Friday was eating pasta and watching movies.
Saturday essentially did not exist. I talked with Eric and Chris and decided to stay in through Monday, and work one more day. Chris has guests coming in this week, and quite honestly, I feel like I have already overstayed. The extra two days even felt like a bit much.

I felt human again, but spent the entire day writing and trying to figure out where I was going on Tuesday. Road or . I called Laina, spoke with her for about an hour and a half, but got nowhere. I did get some inspiration from the writings of Kinga Freespirit, a young woman who, with a friend, arrived in in 2000 with about $600 between them. They took the attitude that they would just ‘follow destiny’, and it took them all over the world during the next six years. Quite a remarkable story that, like Chris McCandless and 'Into the Wild', does not have a happy ending. She contracted cerebral malaria in and died in 2006. A waste you may say, but I would rather die like that than in an Assisted Care Prison marinating in my own pee wishing I had "done something".

Chris had to work, and when he got home, we made popcorn and watched Max. I went to bed with still no clear idea of what I am doing Tuesday morning! I just know I’m doing it!
Posted by Todd X at 1:28:00 PM