Chris and I intended to meet Kevin early, but our late night made for a late morning. We hung around our spot in the desert before seeing Kevin return and making our way to his camper to say hi and start the day. 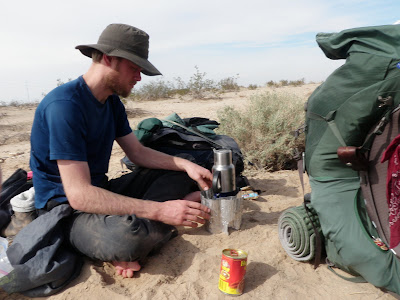 Kevin's a rare entity: one that should talk more! He's a wealth of information. This Monday morning: what type of vehicle one can acquire cheaply, gets decent gas mileage, and has sufficient space for a full-winter Slabbing or living inside while moving from place-to-place. During our stay, Kevin playfully suggested, several times, that we take one of his two remaining pit bull mix puppies. He had 4-other dogs who double as security for both people and coyotes... the later of which are heard every night. Kevin also had possibly the largest domestic cat I have ever seen, weighing in at 29-pounds, and serving as Head Mouser.

I use the term "domestic" loosely. This cat apparently was seen fighting free from an owl, while being carried 20' in the air! He's confident that this "cat" has had its own run-ins with coyotes; it's totally unimpressed with any of his much larger dogs. Dogs are everywhere at Slab City. Many of the residents just let them breed, meaning there is an abundance of puppies-- who tend to all look the same! As with Kevin, they use dogs as companions, coyote defense, and as an alarm system. 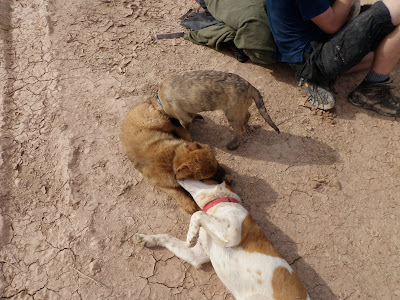 Slab City's "Skate Park" held a congregation of eclectic people, some of whom Kevin thought would be able to instruct us on hopping one of the frequent freight trains rumbling through Niland. One of these "authorities" turned out to be the shifty little redneck who scoped us out the day before! He was quite surprised to see us again, especially with Kevin, and answered the few questions we had. His lasting nugget of wisdom: get off the train when it stops. There were a few others there who would chime in occasionally while playing X-Box or PS3 out of a van. 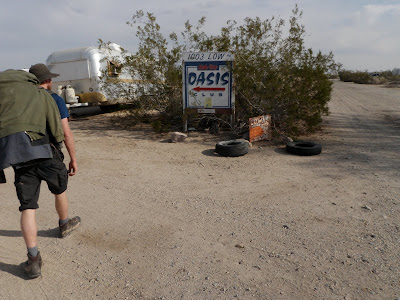 Wanting to charge my cell phone, Kevin fatefully directed Chris and I down the street to the Oasis Club: described as Slab City's "social club", where people look first when someone's not "home", and where Kevin said members can charge their electronics. The Oasis raises money by charging members $20/ year, which seems quite cheap, considering. Since I wasn't a member, Kevin said if I offered the owner a couple bucks, I should be fine. Mike was the proprietor. He initially came off as an ornery old coot, but he agreed to set my phone up on his electrical contraption; one using car batteries to funnel D.C. power into an electrical strip. I have no idea how it worked. But, the phone slowly charged giving me the opportunity to meet and chat with the interesting characters coming and going from the Oasis, one of which was a friendly old Dakotan wearing a cowboy hat, flannel shirt... and dress slacks, socks, and shoes. I would later recognize him as another extra from Into the Wild.

The anorexic bartender, Kari, also reappeared, much to the delight of the older male contingency; one obviously starved for female companionship! The baby-boomer response reminded me of my days as a carnie; how a person's allure is at times relative to the beholder's normal surroundings!

It's like Eddie Murphy's routine about the starving man and a Saltine: "This is the best cracker ever! This must be a fucking Ritz!" She temporarily vanished saying next to nothing but would reappear later-not coincidentally it appeared when the beer and cigarettes arrived! 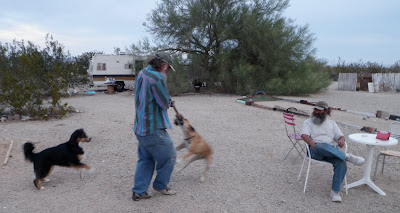 The initial phone charge turned into an all day event. I was meeting people, having a good time, and Kevin stuck around for quite awhile talking boats with another Slabber wanting to sail for far off lands.

Late in the day, another young lady paid a visit from "civilization", and she was far beyond "Slab City Cute." Out-of-place gorgeous, in fact! I have since forgotten her name, but everyone knew her. I learned later that she had been an extended resident of The Slabs, had brought her RV, and was staying the night with boyfriend in tow. She was in her early 20's and fascinated me in that she was disgustingly comfortable wherever she was; she could obviously adapt to any setting. She took up a collection for beer soon after arriving, and with some of my money in tow, headed to town for Natural Light: The Official "Beer" of Slab City.

Despite his initial prickliness, Mike warmed up when I made good on the "couple bucks" to charge the phone. He promptly returned it, and began asking questions about where I had come from and what I was doing. It turned out that Mike and I had much in common, particularly political/social frustration and anger. He is from Silver City, New Mexico, was a teacher, and unplugged out of disgust. He proudly could not be told what to do or how to live, and although he never explicitly said so, I suspect holds little respect for those who can. We didn't chat enough, but I enjoyed the time that we did.

The sun fell, the fire started, the beer arrived... and, "coincidentally" so did Kari! I offered her a couple of my beers and settled in to my seat for the evening.

People came then went and we were joined by "Under Armour Guy", whose name turned out to be Ray, and who would become one of the biggest players & influences in my travels. About all I knew about him at the time was that he had set the world record for the longest continuous hike. But, he was far from done, and supposedly looking for far more than simple glory or his name in a book. He has an ultimate goal of 13,000 miles, is raising money for a non-profit, and planned to be out until mid-2011.

Chris, always looking to share the glory of his own walk, took to Ray immediately. The similarities were striking, not only in experiences, but especially regarding these supposed "predators" we call people. Ray, like Chris and I, had his faith in people bolstered by actual contact with them, rather than relying on hearsay and the media to shape/confirm his worldview. As the night went on, and everyone else but Kari went to bed, the three of us got along quite well.

Kari and I, on the other hand? Not so much. Even with the passage of hours and chugging of various people's beers, she remained creepy-quiet; when she did speak, it was usually to demand someone's cigarettes, or that fresh wood be brought for the fire.

As I was digging into my backpack, she said something since forgotten, but indicating she felt WAYYY too comfortable with me. And I had apparently had enough of her. Her last obnoxious comment was reflexively met with something to the effect of, "You need to just shut the fuck up." Ray had a horrified look on his face, probably expecting the apocalypse, while Chris was, by now, far from shocked. Kari replied with a timid, nearly inaudible, "You... didn't... just say that" to which I suggested that perhaps she had "misjudged" who she was fucking with. Apparently, Kari was unaware that she held no special status with me despite having her vagina coveted by the rest of Slab City! I knew next to nothing about her, so the whole thing just reminded me of Timmy!

Ray invited us to camp with him, so shortly after the 'Growl n' Hiss', we made our way toward his nearby spot. We discussed geeking out over gear the next morning while I felt shitty about sniping at Kari, wondering if I had barked a bit too loud...