Since 2008, there have been surprisingly few significant slip-ups when it comes to following that "Voice." I've been fortunate enough to catch myself at the last moment, or rescued by serendipity and subtle nudges from others. This was not to be the case this week. Mistakes would be made. They were significant. They were valuable. They were mine. All mine. If, while at Slab City, I had been focused and not creating my own doubt-induced Quixotisms, the next several days would look far differently than they shall instead lay out before you!


Over the winter, I had slowly lost my footing atop my foundation and my grip on the compass. Self-doubt cast a cloud of confusion and cost me the ability to both listen to and trust myself. There had long been a sense of stirring; even before the fact Slab City felt to be the site of significance. Endings or beginnings; not ones necessarily pleasant. The aroma of both foreboding AND excitement emanated around this visit, but being rusty, barely tuned-in, and clinging to sadly antiquated thinking, I based my observations upon lazy, short-sighted, and familiar assumptions- rather than staying grounded in reality and observing the obvious: fundamentals had been altered and flimsy foundations crumbled beneath the dead-weight of ego and rationalization. The remnants would be hastily pasted together using even more verbal gymnastics only to be quickly brushed aside by a swift, obvious metaphorical smack in the face. I'll clarify these thick sentences in time. For now, suffice it to say that this first week of February was both: an ending and a beginning. To the details... 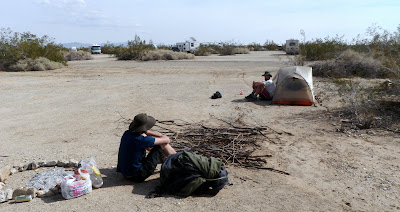 I awoke immediately feeling quite guilty about barking at Kari the night before! That was, thankfully, put to rest when I was assured that she was indeed acting... I'll translate to: "unsavory." My impressions confirmed, I immediately felt much better. Kari, in fact, made her way over to visit Rael. She was smitten! Refusing to speak to anyone but Rael; her defiant display and the fabricated tension were both inappropriately amusing! Kari then announced, loudly, that she was off to presumably seek her intrepid adventure in Los Angeles. I figured this was the last I'd see of her. I was OK with that.

As Tuesday got underway, Chris hankered to get his "still not in a hurry" move-on, despite what appeared to be a blossoming situation. I on the other hand was NOT eager to leave! Slab City and I liked each other, and I thought highly of most of the people I'd met. At the time, this was secondary to the sense that there were interesting possibilities afoot with Chris, and I wanted to see them through.

The last time we had traveled together, outside of a night in Idaho, was way back in July at the Iowa 80. This ended with the disclosure that I was, literally, dreaming of punching Chris in the mouth. I wondered, had anything really changed? In the 3-full days I had been in the desert, the only noticeable changes in Chris were his new VisionQuest Narrative (now not going to Mexico), and instead of heading west, toward Denver or Port Townsend, he was running east toward treasures surely buried near San Antonio. Sure, he had stayed a couple extra days, but the efforts felt contrived and the results had little tangible effect. Rather than the actual experience being the texture, they appeared to be held as incidental at best; secondary. Useful only if confirming and/ or conforming to the pre-scripted scenario. Nothing deviating from the Heroic Epic would be suffered for long! 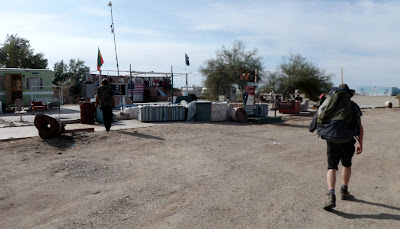 Around midday, Rael joined Chris and I on the 3-mile hitch into Niland where the two of us would presumably begin hitching toward Phoenix. I rationalized it away by pointing out that I could exchange my boots at R.E.I. The rubber had already begun separating from the leather, which WAS ridiculous considering how little wear they had, but it could have waited... for weeks if not months. I was simply trying to convince myself that it was a "sign" that the dead dog could still hunt. Behold: The Power of Bullshit! Damn windmills. We had a ride into Niland before even leaving Slab City. 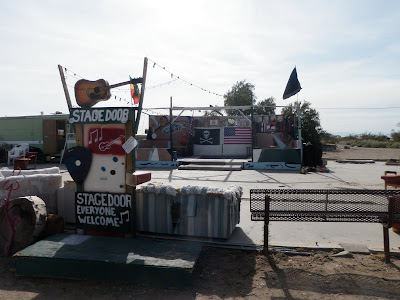 Our first stop was Niland's library which is funded by Imperial County. The county, like the rest of the state, is insolvent. I learned of the county's fiscal folly because Tuesday is one of the two days their little library was open. And, big news: it wasn't to be that way for long. Earlier, a TV news crew appeared in town asking how the library's March closing would affect locals. Niland is a decrepit, dusty, dirty little place on the shores of the largest engineering snafu (The Salton Sea) in history. It has nothing to speak of, other than meth and its proximity to Slab City. I felt for these people losing their little library. You could see a resignation in the fact that Niland's residents really don't matter to anyone. At least they have meth! And panhandlers. One, a particularly aggressive and annoying tweeker. 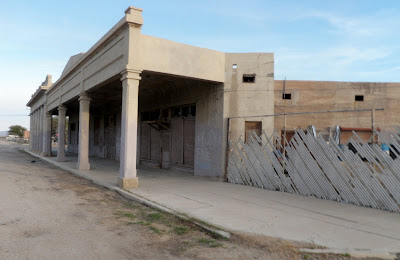 With Chris checking the Internet, Rael and I headed to the little diner for lunch, where we were pleasantly surprised to again see the unnamed, congenial hottie from the night before. Our plan was to get a "real meal" at the diner, which Rael did, but by now I was realizing how much money I'd wasted. I decided to apply a new found discipline by depriving myself... of food. My idiocy is astounding. 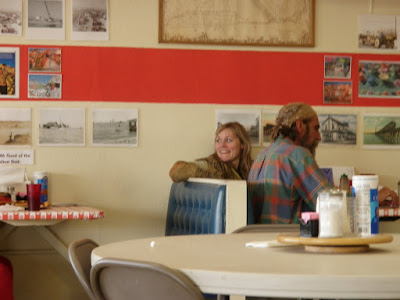 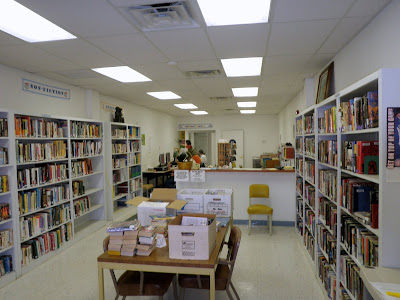 Back at the library after an orange juice, root beer, and splashing warm running water (woohoo!) over my head while cursing the fact I had hair, I learned that there was extensive public transit running through Imperial County. Really? They can't keep this dumpy little library open, but I can hop a southbound bus to Brawley or even all the way to the BORDER at El Centro... AND FOR A BUCK? Well, shit. To hell with hitching! We concluded that we'd be better served getting up and taking an early bus on Wednesday. I was feeling frequent, and now-familiar twinges of dismay about leaving, so staying another night set nicely with me and delayed dealing with that little conflict and in the end provided me the opportunity to rationalize it away with, "at least there's one more night here."

The three of us had begun the hitch back to the Slabs, and imagine our surprise when Kari zipped by us, on her way TO Slab City... hours after her supposed exit to the big city! "What happened to LA?" we asked between laughs. It never occurred to me that she could have at least given Rael a ride, but almost immediately after she and her horn-highlighted passive-aggression sped by, we got a ride back with Kevin. I like that Kevin.

Not surprisingly, Tuesday came to a close at the Oasis around another fire. Kari apparently had trouble navigating to both LA and the cigarette store! She would periodically show up, bum a cigarette, sit there long enough to supposedly keep up appearances... despite saying NOTHING other than, "give me a cigarette"... then vanishing until she needed another. I'm glad I quit smoking; another "go fuck yourself" would have likely found its way into conversation.

The three of us returned to Rael's spot, setting the clock for 6am. Wednesday would be even more eventful; one of those days that set tones which would resonate and rearrange things down the calendar...
Posted by Todd X at 4:06:00 AM