Thursday night's incessant sneezing turned into Friday morning's "Crud." I woke up with my throat killing me, and was collecting stuff in both my head and chest although other than that...I felt great!

When Chris had Oscared off Thursday, the idea was to connect Friday morning and figure out a time to meet at REI. After all, that was the flame to my Slab City Moth! The hipbelt on Chris's pack had gone to hell, and as mentioned, the rubber on the shoes Lynette had bought me had already begun separating from the leather, and I was going through the now-standard cycle of obsessing about weight and contemplating downsizing my backpack if they had a suitable model in stock. Yes, by the time we learned Chris was already there, it was obvious that hours of fun was to be had at REI! Literally.


By the time we left 2-hours later, I had my boots and Chris had his new pack. Even El Jefe had barely escaped buying one! Watching him go through the process reminded me of starting this process from scratch and having to learn everything about gear. I was actually a bit nostalgic for these days of discovery; the excitement and possibilities of "what if." Capture that, and you'll have Youth in a Bottle.

From there it was back to Jefe's for the afternoon where the three of us spent the next couple of hours chatting and philosophizing about some of the "why's" behind this way of life. It was nice, and Jefe seemed to eat it up; he was quite interested in what the two of us were doing. Physically, I was feeling progressively worse as the day went on. 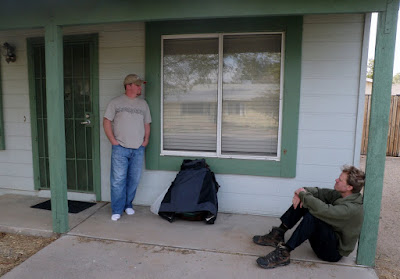 Chris had set up another date with Oscar, which included a ride to Tucson (and toward San Antonio) sometime on Saturday. When Oscar called to let him know he was near, we shook hands, he walked off, and that was unceremoniously that. A slight, familiar-but-faded sense of missed opportunity hovered momentarily in the air, but I understood that what "could be" is quite different from what "should be", and most certainly is often completely foreign from "what is".

Jefe gave me an amused look as I snapped a photo of Chris walking off, but I clearly thought that this was probably it. The story had yet to be fully written but even then, immersed in the trees, I could see the forest well enough to understand what had happened over the past week.

Chris was off to his next mystical lillypad, and I was eager to hear how the events transpired on I-10 between Tucson & San Antonio, and then once he got there.

I still believe strongly in the things that he and I had supposedly agreed upon. Slab City, Quartzsite, and Phoenix had served to re-clarify and reinforce these things--the primary of which being that events tend to cooperate and work in unison FOR you if you're "on-track"; if you're synchronized, things just seem to "flow." These "coincidences" are strewn throughout this blog. I wanted to see what happened to Chris in the immediate future; to me, this would be an indicator if he was in fact tuned-in, or that he was pretending to resonate on a fabricated frequency...
Posted by Todd X at 6:03:00 PM