1. Of or relating to the common people of ancient Rome: a plebeian magistrate.
2. Of, belonging to, or characteristic of commoners.
3. Unrefined or coarse in nature or manner; common or vulgar: plebeian tastes.
n.

plebeian; pleb: In British, French, Irish, Australian, New Zealand and South African English pleb is a derogatory term for someone thought of as inferior, common or ignorant.


Lex and Val's legendary hospitality didn't end at their RV nor did our conversation's end with Wednesday. An eventful Thursday began with Val making breakfast and Lex continuing with his merciless shredding of an obsolete system, useless politicians, and a complicit, but increasingly restless society.

Most of Lex's rhetoric seemed to be directed toward Chris, which I found utterly amusing! Chris, to my knowledge, has little passion for politics and at last check, "held out 'hope' for Obama". Taking this into account, I found it odd that he was actually engaging Lex in these chats, although Lex did most of the talking and Chris plainly seemed to speak from Lex's established lead, offering nothing contradictory or original, other than proclaiming that Lex "should read Todd's blog." He was the congregation's "Amen!" to Reverend Lex's sermon.

For my part, I was again picking my spots and biting my tongue; generally comfortable within my familiar observer role; observing Chris as much as anything. He seemed to be enjoying the  experience; one whose pursuit seemed meaningless the night before. I also concluded that this Peasant Rage had taken phenomenon status over the last couple of days and was still trying to take its temperature and examine its source in Lex.


After Lex & John had left for work, we had another nice conversation with Val until their friend Keith arrived. Val had arranged for us to ride with him all the way to Phoenix as he was on his way to the airport to pick someone up.

Our stay with Lex and Val was barely 12-hours, but left an impression on me. It was yet another smack in the face, and legitimized this overwhelming sense of familiarity. Something was most definitely afoot in the desert southwest! The same as it had been on the Pacific Coast and Idaho in 2008, in various places and particularly up north last year, and now everywhere I seemed to look in '10. There was no "warm up"; 2010 had kicked me in the mouth almost immediately, beginning with the conversation Chris and I had had Sunday night in the desert. 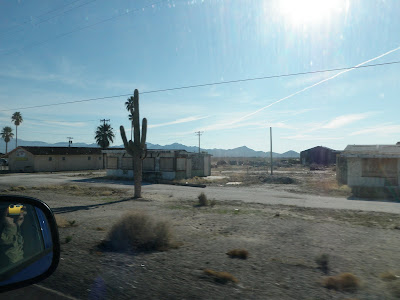 Rather than take the relatively sterile I-10 into Phoenix, Keith decided it would be easier to get the two of us where we needed to go if he took US-60, meaning we'd get to see 120-miles of rural Arizona. I was happy with that! Keith was in his 70's, retired, and from Flint, Michigan. He escaped Michigan's ridiculous winters in Arizona.

The three of us talked about many things and Keith, notably, never bothered with "what ya gonna do when you're done?". Instead, he offered a glimpse into his mindset when he told of joining the military out of school, and later being glad he didn't "rush off to pick a career." He said he had no idea what he wanted to do and would have "just fucked off" in college had he not gone out to "live a little" first. I found it remarkable that this 70-year old man contradicted the establishment in favor of, "Live First!" He held that mantra tight, which gives me hope for myself...and others! 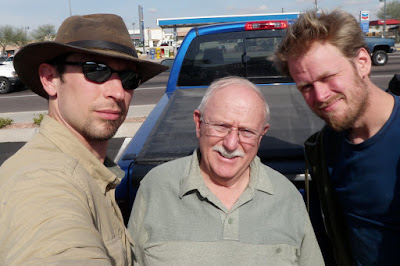 Keith was this "theme's" final example. Keith has witnessed Michigan's economic starvation firsthand, and while not affected as badly as some he, too, harbors a special sort of rage-also directed squarely at the government. He is yet another who's abandoned "party" affiliation, and discarded political dialectics. He is, like many, disgusted with Obama and the rest of the Democrats attempting to market and sell what I've rebranded "Insurance Reform" and deceptively selling it as being primarily in the "people's" interest. Keith sees thru Iraq & Afghanistan, wonders why Guantanamo is still open, and has a particular hatred for The PATRIOT Act, sarcastically wondering why "Obama hasn't repealed it yet" in wonderfully obnoxious tones! Soon enough, the conversation turned to something brought up by Lex the night before while I was on the phone; a conversation I had missed but a topic I liked: Demonstration!

We began speculating about a massive cross-country, March of the Unemployed converging on Washington at about the time of the mid-term elections with the goal of forcing revocation of the PATRIOT Act and to "raise awareness" as to how much rage is really out there. Even the ENRAGED are scarcely aware of how much ANGER is pulsating just beneath the surface of American society. Don't be mistaken: It's NOT directed at Barack Obama, Sarah Palin, Nancy Pelosi, or even that greasy bastard John Boehner. Not specifically. It's directed at ALL OF THEM, COLLECTIVELY. It's not just a particular political party, IT'S THE GOVERNMENT AS AN INSTITUTION that's losing the "consent" of the governed! Read your Constitution if you need that put into perspective.

God help the politicians if the Plebs ever realize how powerful they are. The system has unwittingly built the opposition Army, and this could be the foundation of what I call, for lack of a better name, Coalition X: where the binding ingredient has NOTHING to do with race, background, or religion. The singular common bond would be simply: poor. The economically manipulated and oppressed; the realization that the American Dream has become something that, as Carlin said, "you have to be asleep to believe." With millions unemployed & without hope of getting their jobs back, and pissed about it, WHY NOT ORGANIZE? What else are they gonna do with their time?!? Trust that they'll be rescued by a government "that threw them overboard thirty-fucking-years ago?" Send resumes to India? 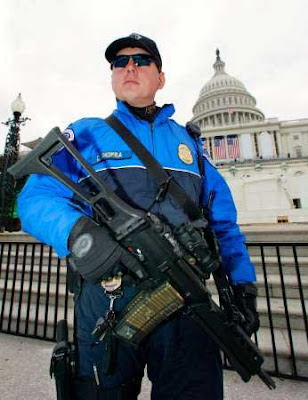 The time's long past for a timid "regress of grievances"; let the towns police themselves. When the "policing" turns into Establishment Thugs overstepping bounds and trampling rights, as it will, we'd show it. We'll have "embedded journalists" and thousands of tiny little camera phones... most with immediate access to the Internet! The philosophy worked in India and Alabama in the last century. Of course, in my opinion, this is all "best-case" and supposes that the tired, muddy masses will organize. All indications are that they won't. Collectively, we're the animal afraid to escape the zoo because he'd have to fend for himself; unchained prisoners of dependency and fear. 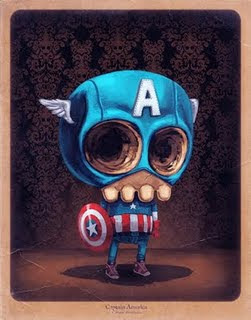 We all loved the idea, and we spent a good amount of time dwelling on the embryonic details until it became painfully apparent how far Chris and I have moved in different directions. When he began to speak from his predictable, redundant, politically correct place about keeping an eye on people in case of looting, I went from beyond disgusted to disdain. A million people? (We think big!) "How exactly would you do that? Wanna hire the Hell's Angels and repeat Altamont?" Demonstrations should be a bit messy, and should inconvenience a few. Otherwise, why not just take out a billboard?

Admittedly, I probably didn't hear him clearly and surely wasn't treating him fairly. After his first few words, for whatever reason all I heard was Wendy's silly Port Townsend Proclamation claiming that in the event of Armageddon, "there'd be no need for guns in Port Townsend because the community would come together." I've never fully recovered from hearing that utopian notion presented with a straight face and without protest!

Since reconnecting with Chris in '08 I've taken a hard right turn. I'm obviously fed up with Agenda Monkeys, "progressives", and now Utopians in particular. But, in a vacuum Utopians would provide a valuable service: surrendering goods without a fight. 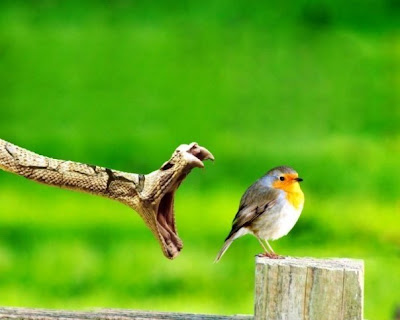