1- Chris and I awaken at 6am
2- Coffee at the Oasis Club
3- Catch one of the two early buses going south from Niland to Brawley
4- Hitch east to Blythe, CA and I-10 toward Phoenix

Surprisingly, it didn't stray far off course, with one colossal unforeseen exception. Ray was also up before the sun and joined us at the Oasis for coffee. I was surprised at how many Slabbers turned out, before remembering that most sacked out by 8 or 9! As had been the case since Sunday, the Oasis clenched on to us. Before I knew it, it was 9:00 and it would be at least midday before we caught a bus. 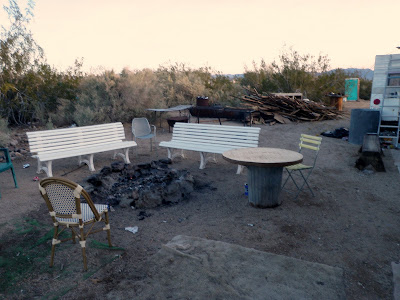 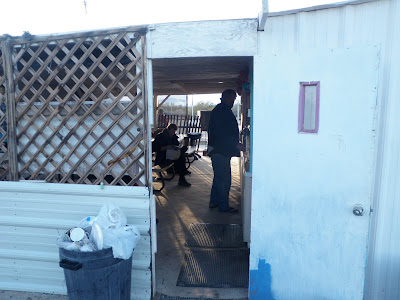 Moth eventually joined a few others congregated around a table having some surprisingly provocative conversations. I participated a little, choosing instead to mostly watch and listen.

I'm not typically impressed by those who consider themselves "progressives" (hippies), and I generally find anarchists ridiculous, especially when babbling about Utopian solutions that require organization or cooperation!

These folks, however, couldn't be characterized so conveniently- despite showing hints of both. There was an articulated, angry social consciousness lightly resonating through the Oasis that morning; something familiar. It was that "something" that I'd found from California to North Dakota to North Carolina, and had hoped to find in abundance at The Slabs. Here it was.

It's amazing what you find when you position yourself to see it. Slab City is NOT simply full of rubes on the run from statutory rape charges or hiding from child support. In fact, they are just as informed- and far more insightful than the generic CNN junky watching from his furnished cage. I would also wager that the typical "aware" Slabber's tendency toward defiance and independent critical thought had most likely made him incompatible with Dialectic Parrots simply squawking manufactured talking points.

In fact, that's exactly why many make their home in the desert. They could not be told what to think or who to be. The more I listened to these folks and chatted with Mike Bright, the more this trait became apparent.

With that, an exciting, yet troubling, theme quickly became apparent and continued for the foreseeable future; something I first (ignorantly) attributed to the locale: more tangible rage, frustration, and mocking ridicule directed at the government and its minions. And, in a far greater degree than last Fall. This would be the catalyst for some mini-drama later on.

As we were enjoying the atmosphere of the Oasis, Ray produced an article written about him for Chris to read. To this point, I hadn't been impressed with Ray's walk. It reminded me of Chris': achievement for ego's sake. It also reminded me of Gary and the King of Cliches Stephen Newman-- I'm keenly wary of "cause jockeys!" Take mental note of that for later.

Part of this was Ray's fault. He has a story; the details of which he'd failed, until now, to mention. One whose coincidence I would scarcely have believed and, once learned, commanded my immediate interest, and more importantly: respect. The regular reader knows that is no small thing!

When Chris had finished, he emphatically told me that I "needed" to read it.

In a nutshell, Ray spent many years as a Judgment Enforcement Officer; basically a repo-man for the courts. He would attempt to coerce payment, then seize property...even evicting people from their homes...because it was his job description.

"Just following orders; just a job." Exaggerated Nuremberg comparisons could be made, but he was good at it. He'd earned the nickname The Reaper. All considered, it's remarkable that I could muster ANY respect for him, but we also shared a favorite Bible verse and an affinity for camels:

"It is easier for a camel to pass through the eye of a needle than for a rich man to enter the kingdom of God." -Matthew 19:24


Remember that? At some point, Ray had a powerful epiphany as a direct result of this verse. However, he took the rare step of fully putting the entire story into context, thereby making it more than a superficial, abstract idea resulting in little more than eloquent lip service. In response to a question asking what the wealthy man's to do in order to become "righteous", Jesus is said to have replied, "Go and sell that thou hast, and give to the poor... and come and follow me." Sound familiar?

That's exactly what Ray claimed he'd done. Yes, he sold nearly everything-and gone beyond. If I recall correctly, he signed his house over to a domestic violence shelter.

He gave his house away.

I read that he described it as "raising $100,000 before taking a step." To hear him tell it, he simply couldn't deal with what he had done in the name of "Mammon", and was in a sense paying penance. I found it remarkable that I had no idea Ray was religious in any way, and in fact I wonder after my own experience if "religious" is the applicable term. There was no preachiness about him; he played the role of a dude just doing what he does.

If possible, his humility may have been to a fault in the sense that I nearly missed his fundamental foundation. The "world record" and sponsors took center public stage whereas, to me, triggers are far more impressive. It's just one man's opinion and observation, but I believe these "triggers" run directly to my oft-mentioned Splinter in the Mind, The Voice, Nosce Te Ipsum, Vitam Impendere Vero, and many other ideas that I've "ranted" about here and other places.

After Andre and the aforementioned winter struggles, this coincidence was staggering. I wanted to pick his skull, exchange ideas, and decipher what exactly he hoped to find... if he even knew himself.

I wondered about the events of synchronicity that he may have experienced. I wondered if he had thought about the notion of being driven by a vision to a place still to be determined. I wanted to investigate that curious, familiar blend of ego and spirituality!

Before me was a guy who had taken the difficult step of an honest, brutally difficult inventory; he would likely be equipped to offer honest insights free from a comfortable Quixotic reality!

What did I do? I made sure he had a link to my Pondering Camels post and suggested that he read up on Andre. After all, Chris and I had a bus to catch!

Obviously, on an ordinary day I would have let Chris resume alone while remaining in Niland. I didn't. I ignored further exposure to another of these timely, significant people like Leslie, Andre, Pastor Snake, etc. in favor of predictably rehashing and reliving the past. I robbed myself of the possibility of meeting other Slabbers who may have turned into valued new friends in favor of recycled conversations and rationalizations; repeated results.

Of course, at the time I was having my own rationalization field-day. "Hey, this could be different than before. Maybe the conversations will bear fruit again!"


Before having too much fun at my expense, despite originally calling this decision a mistake I don't believe that it was. Wednesday morning was the first of a double-fisted event; the "beginning" I had sensed coming a month before--yet beyond the traditional meeting of a person with similar views and guided by a vision or The Voice. Ultimately, it would serve as a reminder of who I was, and what the hell I was doing!

In order to further bust out of this funk of self-doubt, I needed to experience the second half: the "ending" to this "beginning." As usual, I'd require reflection time to piece it together, and would have it forced upon me in the same way as Port Townsend. And, as usual, I would happen right in front of me, despite my blindness and egoistic objections!

As Chris and I left Ray, The Oasis, and Slab City behind, Shakespeare's famous line from The Tempest rumbled quietly in my subconscious: What's past IS indeed prologue!
Posted by Todd X at 2:17:00 PM