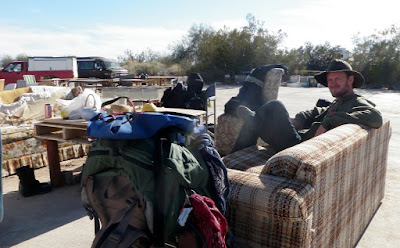 Leaving the Oasis, we almost immediately had a ride into Niland. The folks running the Karma Kitchen were driving vanloads of people into town to sign up for "government cheese" and offered us a ride. In the van were some teenagers I had yet to see during my stay, and I found it rather odd to see these kids signing up for public services, but it didn't bother me in the least in fact I was happy for them! "Bleed em dry!"

I chuckled as I recognized that, so far, my metaphysical senses had begun the year subordinate to the political/social ones rather than overshadowing them, as was the case in '09. This was an interesting balance. 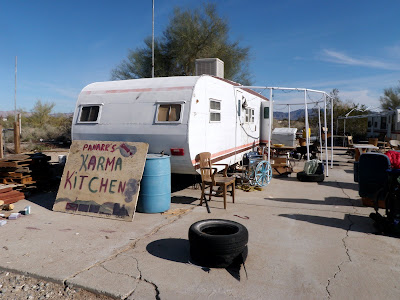 Chris and I made our way to the south end of town, and set up shop to see how we'd fare tandem-hitching on this state road. We figured if nothing came of it, we could catch the dollar-bus toward Brawley in an hour or two. I was just as curious to watch Chris as I was to see how we'd travel together-or if we'd even get a ride!

I had repeatedly heard how he "was in no hurry" now. After hearing him profess his love for Sit Down & Shut Up, and even his attempted hijacking of The Side Car, I wanted to see it for myself! I've told Chris (with annoying frequency) that I would love to see what happened to him if he wasn't always "running somewhere." Considering it was Wednesday and that he had originally wanted the starting gun to sound on Sunday, I was open-minded about the possibilities. This could be cool. Niland
With that as a backdrop, we threw our thumbs in the air unsure of what to expect. I was amused at how easy it was to settle into hitching! It had been 5-months, but it was immediately an old hat. We didn't sit there too long before Christian pulled over on his way to El Centro. He was the perfect way to begin the trek toward Phoenix; he was very friendly and the conversation quickly turned to society and politics. Not long after he dropped us off in Brawley we would be in The Preacher's truck heading east toward Blythe... and the theme would become blinding. 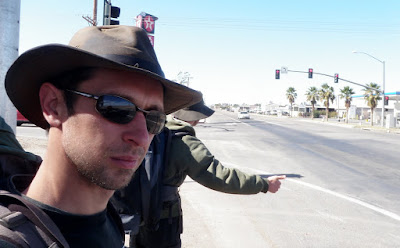 
The Preacher
The Preacher is from Texas, and yes, he IS a preacher. One who swears profusely and loves pot. He himself had just left the Slabs and was on his way to Quartzsite, Arizona before returning to Niland the next day. He quickly offered to take us all the way to Quartzsite instead of Blythe, and I began to wonder if we'd make Phoenix that afternoon. He had a small pickup with a cab, and Chris chose to ride in the back with his two dogs, who would provide entertainment themselves!

He professed to be a man of God, but I would categorize him as a borderline revolutionary: disgusted with everything Federal Government, Democrat AND Republican- and quite loud about it. He did little to conceal his disgust for law enforcement as we stopped at the Border Patrol checkpoint-- so they could look at us and ask if we were citizens. Here was someone as offended by this arbitrary "papers please" bullshit as me! It set off a firestorm of conversation that lasted all the way to Arizona. 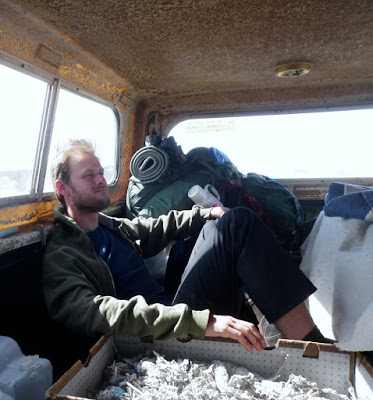 I got a kick out of this middle-aged redneck. He was another of the people I've met with regularity all over the country for nearly two-years. He was pissed off and no longer suffered official, disseminated bullshit. He has equal hatred for each political party and, like many more than some are comfortable in admitting, is ready to do something about it even if that "something" is just withdrawing his support.

As he laughingly pulled a handgun from beneath his seat immediately after passing thru Border Patrol, I thought about the distinctions between he and the hippies/ pacifists preaching peace, love, drum circles, and Communitarian Responsibility. If there's ever a vacuum, are these the factions competing to fill it? Smart money's on the one willing to fight for himself, even if that means slapping the wrong people from time to time. Sorry, hippies. In that world, you're prey.

I greatly enjoyed this ride thru the Imperial Dunes then across the Colorado River back into Arizona. I was glad it was Chris sequestered in the back and not me! When we finally detrucked in Quartzsite, Chris realized that this was the guy to whom Melissa had handed the bunker when she left. Small world. 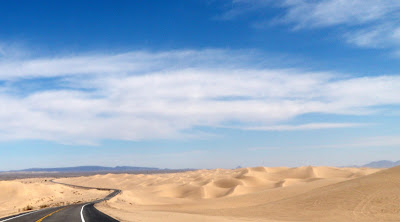 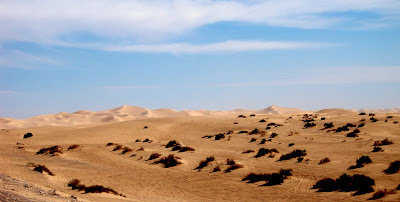 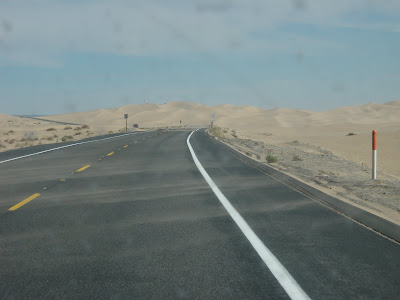 Imperial Dunes, CA
Lex & Val
From there, it looked good for Phoenix. We had a few more hours of daylight, were at a very busy intersection, and considering the events of the day so far, (remember, it had begun at Slab City's Oasis Club) it seemed to be shaping up as one of the "memorable" ones.

Chris had made a curious decision however; one that seemed a bit out of character for him. Quartzsite happened to be the winter home of his friends, Lex & Val, whom he'd met on his walk and met up with in Boise last September. It appeared to me that he was again simply favoring the sprint at the expense of looking around. I didn't think much of it at first, after all they were his friends and it was his business. We tried both the exit ramp and the truckstop, but things were now more challenging.

We considered hitching separately and things suddenly felt a lot like the Iowa 80. At some point, I asked Chris about his decision not to call his friends, who had made a point to tell him where they were and to look them up if he happened through. His reasoning was, "I don't know if they got my email" or something. It seemed ridiculous not to at least call and leave a message, and I told him so. I handed him my phone and he gave them a call. 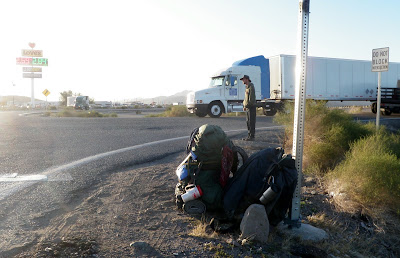 A short time later, Lex & Val were at the truck stop to presumably go for coffee or something. After chatting for a few minutes, we were reacquainted (I had met them both at Lynette's in Boise) and they whisked us off to the RV park where they spend their winters insisting that BOTH of us stay for the night, despite the fact that their son was also living there.

With their dog and cat, it was crowded! Even with this obvious inconvenience, their hospitality was the thing of legend! We were offered showers, which after a week at the Slabs I pounced on. Then began the conversations. Care to guess the topic? (Hint: It wasn't American Idol.)

I had heard much about Lex and Val from Chris over the last 2-years. Lex had spent years riding horses across the country to Idaho and spent his summers there. I learned this night that they escaped the communists in eastern Europe decades ago with Lex escaping a Russian concentration camp as a child in Czechoslovakia, finding his way to the US, and essentially being enslaved by people HERE as a result! Val had a similar experience escaping Romania. Now retirement age, these two delightful people have worked hard and paid their dues only to be rewarded for their service to society much the same as everyone else: with a smack to the face and a struggle to keep afloat. Enter-- the chat.

Even by my standards, Lex is passionate. He's not shy about telling you what he thinks and, like everyone else I seem to run into: PISSED! He told us several times that being "out there" we "see things as they really are." I absolutely agree with that and have tried to explain it to dozens of people- usually to no avail. He got it with no solicitation.

Again, the theme held serve. I was witnessing venomous dissent; another call to tear it down. The difference here was that these were NOT radicals living out in the desert. These were not gun-totin' ultra-conservative separatists up in Montana. Here was a couple who should be enjoying retirement who instead have their adult son living with them as all three struggle to keep it going.

Like many others I have encountered, they did everything they were told and expected to do. And, for what? That question has NEVER been sufficiently answered. The pattern was undeniable. The cacophony getting louder.

As I curled up on the floor of their little RV and dozed off, I was getting an idea of what was happening. The Plebeians are stirring. Stirring despite being ignored; stirring independently of the Patricians. Once outside the media/ social bubble, you'd need to be blind and deaf not to notice. It also seemed apparent, based on the past couple of years and these familiar moments of human synchronicity, that things were aligning. I even pointed out to Chris that we had seemingly "combined our experiences." I now know what these significant events and people look like; this Wednesday seemed FULL of them and Chris had been part of it. All we had to do was relax and let it gel. The problem with that? The "we" part... 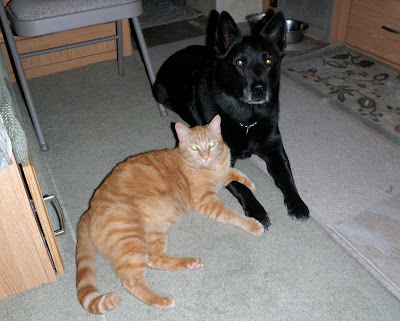