Rather than risk the toll road, I decided to just go around Syracuse, first via Route 14. Initially, I thought this was a mistake because of the odd vibe sitting on the side of the road! But my first (nameless) ride came quickly, took me the eight to 10 miles up the road in Lyons, and after that I was fine and this interesting day was underway.


It was again quite warm and humid and, no longer used to the humidity, I spent a couple of hours enjoying Lyons Library’s air conditioning! Despite the heat and out of sheer laziness, I left Lyons without getting water and although I never ran out, I nearly did and the combination of forced-conservation and the afternoon heat zapped me.

When I finally found shade along the side of the road to rest I was thrilled, but only there for a minute when John pulled over. I was quite happy to see him stop-- knowing full well that he had likely relieved me from the task of fully confronting my own troubling laziness! John took me the rest of the way to Highway 104 and after stopping for gas (where I filled up with too much water) deposited me at a crossroad a bit east of Walcott, 20-some miles from Oswego.

I didn't know it at that time, but John was beginning a temporary mini-theme. He was open about his Christianity, but struck me as someone who did more than just “talk” it and unlike those multitudes who solely practice on Sundays, presumably when God's watching!

Many (most?) Christians I've run into seem to wear their Holy Costumes so that all may see their supposed “righteousness” they are; displaying their Christianity--advertising it to the extent that memorized, externalized scripture allows. When it comes time to act and actually show Christ’s love & compassion for the downtrodden, they typically morph right before my eyes into something less than Christlike and much more self-righteous. Again, I'm no theologian but there's a word for it in the Bible: Hypocrite. We all know how The Jesus felt about hypocrites!

Although my exposure was limited, this was NOT John. Through our short conversation, he struck me as a man who lived his adopted principles, and I respect that. If only more people would! 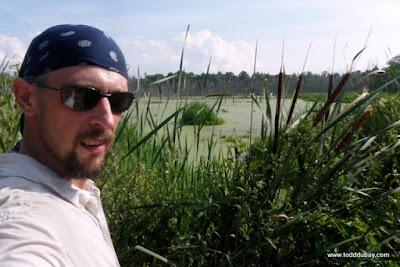 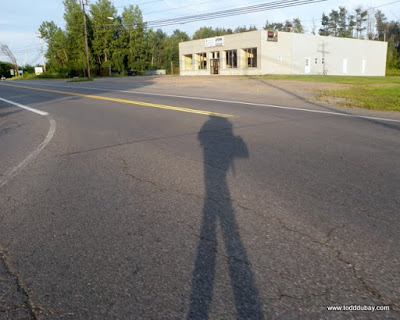 After this, I felt like I was hitting my stride. I was more efficient and had learned the lesson of laziness...again! As I set off on foot east down Highway 104, the blister was getting worse, but I just felt like walking; like I was doing what I intended to do despite the pain. I passed through the little hamlet of Martville, a little town I liked alot, stopping to wander through the old cemetery situated next to a clockmaker’s place. Some of the stones in the cemetery date back to the civil war, and the fact that there was a clockmaker’s shop right next to the cemetery added to this little town’s warm, antiquated feel.

After Martville, I was fading. The blister was at the point where it was nearly unbearable up hills, yet I kept going even though I knew better.

As with Ed the day before, when I started looking for a place to sleep a ride came. The sun was dropping as I climbed into Dick's van while learning that he had passed me a few hours earlier and, rather than just go home, had chosen to come find me because he felt "guilty". I found that astounding. Astounding that someone would put forth the unprovoked effort to find a perfect stranger just to give them a ride when no one would know better if they didn't. Let alone after two hours! It seemed clear that, like John, Dick was yet another person who lived his principles when no one was looking. For me, that's near the pinnacle of character.

Dick was a classic. A no-nonsense, straightforward, no-words-wasted man who looked to be in his early-to-mid 70’s. And, by the way, the clockmaker whose place I noticed in Martville! We had an interesting conversation about his trade, and when I exited the van, Dick reminded me a whole hell of a lot of Jack from my trip through Idaho in 2008. I also had the distinct feeling that perhaps I would be surprised with the people of New York by the time I left.

Dick suggested I avoid Oswego and instead go to Fulton and take Route 3 through Mexico to I-81. With the blister worsening I thought it a good idea to hitch I-81 toward Watertown and Massena, where I had once been on the air... but never seen! (explanation coming) In addition, US-11 runs parallel to the interstate so if I changed my mind walking would be figuratively painless. All this made sense, so when Dick offered to take me clear to Fulton, I agreed.

Dick dropped me in a less than ideal spot, and although I needed to walk a ways to find seclusion, I was reasonably sure Wednesday was nearly through for me and it was imperative that I find a place to sleep.

Inexplicably, I passed several more-than-suitable spots in order to find that ever-elusive "better one." Had things ended differently, I would have attributed that to my troublesome indecision. However, things worked out perfectly when Dave pulled over, unsolicited, said he was on his way to band practice, offered me a beer, and a 10 or 15 mile ride toward Mexico.

Had we had more time to hang out, Dave would've likely turned into one of the more interesting people I've met. As I chugged the cold beer, I listened to his views on society, culture, economics, politics, and where he believed things were going. This near-monologue reminded me a great deal of my conversations with Chris, and select few others.

Although I am now on the alert for what I term Anarchist Theorists & Intellectuals, I was impressed when I learned that Dave actually owned land nearby, was learning to farm it, and had contemplated a barter system in the area. He seemed to have an abhorrence for politics, but was yet another upstate New Yorker I had met that day who lived their principles at least as much as talking about them. Fascinating indeed.

Dave's initial offer to take me to Mexico turned into a ride a few extra miles to the interstate: I-81. As I jumped out of his car and snapped a picture at the truck stop, I had an odd yet distinct feeling of loss and hoped I would hear from him again via the website.

The sun was nearly down at this point, but there was nearly a full woods between the on ramp and the interstate so camping was a breeze. In fact I probably could have stayed undetected for a month had I wanted to!