It took some time to understand, but Saturday morning’s frustration was less about Ahab, Ginger, or Bill than myself. Somehow that perfect Friday soured, and although I meant no harm other than being my oft-obnoxious self, something sinister and familiar crashed my little party via the radio conversation: what Chris likes to refer to as my negativity and judgment. Guilty: I have a track record as one aggressive, direct, cold, bitter son-of-a-bitch-- especially when someone tries to sell me on the value of conservatism or that shell-of-a-medium called radio! I suppose that’s because on some level, it still matters to me. The conversation ended, but I lugged the negative energy with me.

Setting off Saturday morning, I was motivated to put Alex Bay’s now-putrid energy behind me! But, with the heel it would clearly be impossible to walk in my boots. It was time to put the Crocs (an idea borrowed from Ray) to the test, and I was shocked to learn that they were fucking comfy, and sturdy! Even with the pack! There was nothing  rubbing on the heel, it could breathe, and while they took some getting used to the lone problem I saw was the holes in the front, and the rubber potentially rubbing parts of my feet raw. Socks solved that.

I hoped to catch a quick ride as far as Ogdensburg or all the way to Massena as I walked east, but nothing came-- giving me the time, atmosphere, and exercise to think optimally and over-analyze the night before!

In my infinite idiocy, I hadn’t connected why I was so sensitive to the topic of radio with where I was going: Massena! I had done a night show there for a summer--recorded in my bedroom and sent via the Internet from Michigan. I’d never even glimpsed pictures of the place, and needed regular coaching from my program director to be sure I pronounced cities, streets, and area landmarks correctly! When I learned I was passing thru New York on my way to northern New England, I knew this was my chance to at least see, talk to, and pay respects to the little town I’d deceived way back then. I never felt completely right about that, although I was good at it. Still, I don’t think I realized how much it bothered me until that morning, waddling like a blistered duck down this tiny two-lane road next to the St. Lawrence.

There’s more to this story. Most of it is a lingering, persistent idealism and perfect rant material. Maybe I’ll share it sometime, but today suffice it to say that my experience deceiving Massena subconsciously helps trigger an intense, adverse reaction when people profess radio’s nobility of purpose and its benefit to society-- as Bill did the night before. Horseshit. It’s surviving “purpose” is playing songs between commercials and providing thinly veiled, pathetically executed illusion of local, community involvement. Remember that the next time you hear “live and local!” Anyone telling you different is lying or selling something to you. Buy Sirius. Seriously.

There’s one final setup that will be helpful for the impending posts. My time at Brian’s over the summer wasn’t what I’d term a chapter in a new Heroic Epic, but is was quietly and deceptively productive even though the “product” will not resemble what I expected!

Eventually, I'll write things that will seem radically out of character, and this moment is these painful realizations nexus. August 14th was the birth and a baby step toward an overdue, month-long reconciliation of a year-long mental and emotional logic-induced stagnation. What was begun at Andre’s, followed me to Port Townsend, then Slab City, Cambria, Monterey, and Michigan; what’s haunted, anchored, and confounded me for the past year had finally begun breaking loose.

However, all I knew then was that I was tired and pissed off that I was walking Route12 in Crocs! Profound. Inspiring. 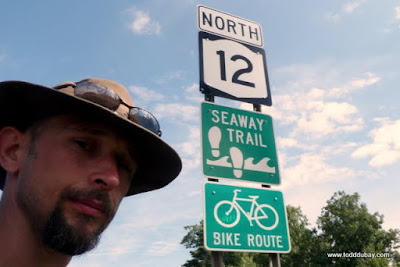 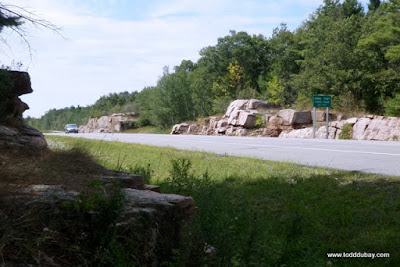 Six miles later, I was disturbed that my central New York luck had not appeared to follow me north when I needed it. Exhausted as much from thinking as walking, I squatted down on my pack across the road from a hair salon in the middle of nowhere. An hour later things started happening. Another single woman, Sue, took me to Chippewa Bay where I watched nearly every emergency vehicle in northern New York drive past on their way to a fire. My version of reality TV! 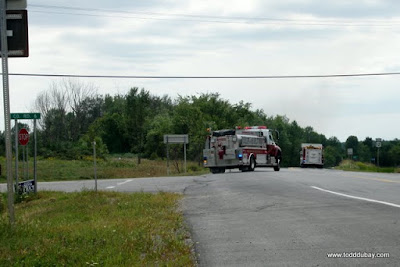 Ninety minutes later, I was picked up by a guy in his 30’s driving a pickup and offering to take me just a few miles, to Morristown. When I told him why I was going to Massena (radio), his face lit up as he claimed to recognize my voice from the station! I’m not sure I believe him, but after he heard that, he suddenly had free time and wanted to take me the rest of the way to Ogdensburg.

Ogdensburg is the largest city in the immediate area-- not huge, but sizeable. It’s 30-miles southwest of Massena, and decrepit. It metaphorically reeked of drugs. It’s hard to articulate, but there is next to nothing there, despite it’s decent size. Houses are falling apart and many buildings stand abandoned and empty. Sadly, it reminded me of a whitebread Detroit..

My new ride/old fan said he would have taken me the final 30-miles to Massena, but didn’t have that much time. Unbelievably, he offered to do the next best thing: pay far the cab the rest of the way. He was concerned about me camping along the road in the impending rain and, despite my meager protests, insisted I call the taxi for an estimate. When Kermit quoted me $30 to Massena, he pounced on it.

We met the taxi-van at Walmart, I said goodbye to He-Who-Shall-Remain-Nameless, and over the next hour watched as some amusing vocational drama played out. Kermit, the semi-elderly driver/ co-owner I'd spoken with on the phone, had overextended and needed another driver. But, the other co-owner refused to answer his phone! Driving me to Massena on a busy Saturday was a hassle!

Over the next hour, Kermit went off-duty, Mark took over, picked up & dropped off several people so  consequently I saw much more of Ogdensburg, literally AND figuratively, than I ever expected! When the other owner finally called back, I learned that the $30 fare Kermit quoted was in fact HALF; it was $30 each way. To their immense credit they were each adamant about honoring Kermit's quote.

Eventually, we were finishing my final leg to Massena and Mark dropped me off at a gas station on the far-west end of town. I chatted with a some gas station customers while I ate, and had another of the “I thought I recognized your voice” moments. My hungry, piggly little ego loved it-- even if they were full of shit! Then again, maybe they weren't. In this case, I choose to believe the best in folks! 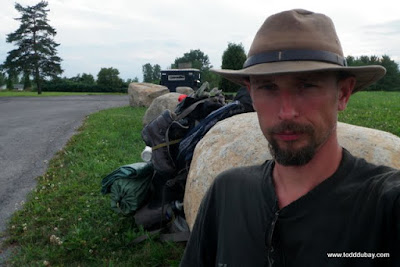 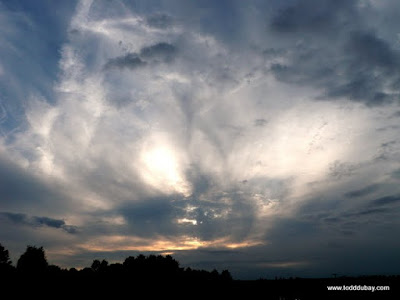 I was three miles south of town, it was late in the day, and the sky looked as though Hell were about to bust loose. I spied a woods directly behind the gas station that appeared to be on public land, found a perfect spot to nest completely concealed in-and-beneath thick vegetation, and finally sprawled out, exhausted, just before the rain began.

Before I dozed off, I got a text from my brother about his sudden, impulsive fact-finding mission via I-80 to Oregon. He’d be going past Lynette’s and offered me a ride. Caveat: needed to be near Michigan by the following Saturday!

There was no way I could process any of it effectively then, but it made for an interesting Sunday!
Posted by Todd X at 4:34:00 AM