Waking up, the first thing I noticed was that the heat and humidity had mercifully relented. Second: I was becoming efficient and streamlined! I'm not sure which I was happier with, but both combined for a good start to the day! Even so, matching Wednesday would prove difficult but early-on, Thursday felt like a old, comfortable pair of shoes. I was back with my old friend Interstate, this time I-81, and within 15 minutes of joining him I was northbound.

My first ride was, surprise, a single woman! A rarity indeed! Elaine was a no-nonsense Mennonite, continuing the religious theme, in her 30’s, and had absolutely no problem letting me know who she was or what she thought. She knew exactly where she was taking me... rather I liked it or not.... conveying in clear, concise terms that she knew best. I liked her! (In this limited dose!)


Elaine dropped me off 15 to 20 miles north on the far end of Pulaski, and after another remarkably short wait, I was on my way to Watertown Center with Steve, who is apparently a big deal in the ATV world. He’s president of the largest ATV club in New York State, courted by politicians actually seeking his endorsement, which he exploits knowing that his organization carries weight. I had no clue that off-roaders held sway in government, but he pointed out that a huge amount of New York land is “public”--supposedly forever. With that much land, providing off-road trails for ATV enthusiasts is a big deal. It was a fascinating, short conversation that also included how best to possibly utilize these “public lands” between Watertown and Massena!


And... Steve was huge! 6’ 5” & 350 pounds. Not much intimidates him -- physically, politically, or otherwise ! Beyond that, he also had an interesting story, including hitching around the country for a couple of years.

Steve’s Watertown Center exit sucked! Little traffic and hard for people to pull over. But, the friendliness of these upstate New Yorkers was further impressing me! After 90 minutes, I had another ride with another Steve through the rest of the largest town on my path not named Syracuse: Watertown. He took me to where highways 11 and 37 split, eventually to angle northeast along the St. Lawrence River toward my adopted destination: Massena.

It was now 4pm and I needed real food. A cheap diner's double cheese burger later I filled my water and joined Highway 37 to supposedly hitch. However, the food had done its job and, against my better judgment, I felt ready to walk again. Unfortunately, my heel was plotting a vicious ambush. Within 2-miles the useless pad had slipped and my previously pesky blister went nuclear. It was clear: this was going to emulate Maryland’s and be a significant problem. By now I was out in the countryside so easily found a place to sleep but, once again,  moments before disappearing to camp, along came a ride. One that started the old familiar falling dominoes of amusing, frustrating events that would write the next couple of days and provide one of my more--unique--tales.

Jamie was yet another single woman. I was amazed, until I realized that she was in the Army and stationed at Ft. Drums. Jamie made it instantly clear that she wasn't afraid of hitchers telling me in a matter-of-fact tone, “I know how to kill you with my bare hands if I need to.” I liked her immediately. She was in her mid/late 20’s, originally from Tucson, had recently rotated back from Afghanistan, and on her way to Alexandria Bay where she chose to live rather than on base.


Alexandria Bay is a small-yet-busy tourist town along the shores of the St. Lawrence River and this particular weekend was The Pirate Festival. Pirates? On the St. Lawrence? Really? From where? Cannuckistan? Did they steal booty for the Quebec Liberation Front? Whatever. It sounded like fun and Jamie was quite accommodating, offering to give me a quick tour of town and the party. Alex Bay reminded me of some of the towns along the East Coast and in the Northwest, and more than a little of some towns on the Gulf Coast. The party looked like fun, and under normal conditions I may have snooped around. Unfortunately, I had my backpack and Blister McBastard to tend to.

I'd previously noticed Keewaydin State Park on my map. It's situated near where I’d turn northeast and thought it may be a great place to camp. If I could do it for free. But, Mr. McBastard made a place to rehabilitate more important than a few dollars so I gagged my inner-miser for the moment.
Jamie dropped me off at Keewaydin’s gate and before she had time to turn around I had met Gus, a young, hefty, freakishly friendly park worker puttering around in the park’s pickup. He went FAR out of his way to greet me and with such enthusiasm I assumed he was selling something. But, when I told him I was going to camp and asked how much it was he said, "Well, no one's there, so fuck it. I guess you get a free site!" He then drove me to my campsite in the state’s vehicle!

I liked that Gus immediately! 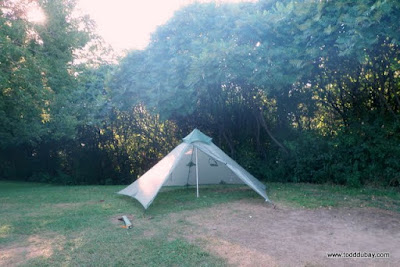 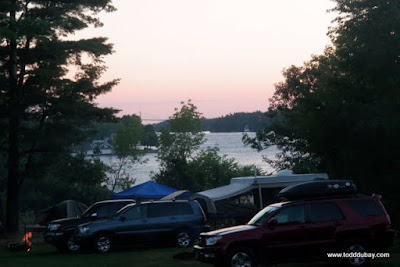 As I was setting up the Origami, Gus returned. This time with  friends. Bill and Liz. We had a nice chat at my campsite and they invited me to walk down to the river to watch people and the sunset. In desperate need of a shower, I declined but assured them I would look them up when I was done. I looked, but after a complete loop of the campground I saw none of them and figured they were lost to history. 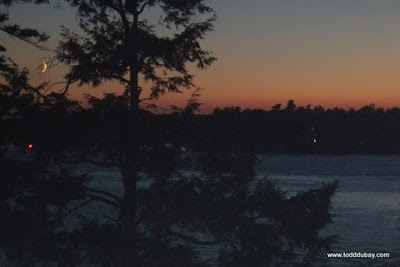 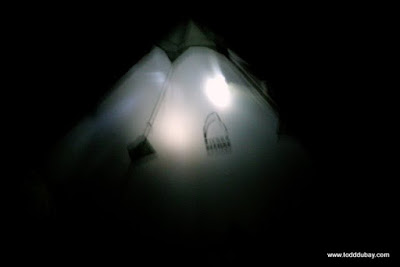 As I dozed off in this remarkable setting beneath the stars, my spirits were soaring despite my now-massive blister. I felt "connected", as though I had recaptured some of '08 & '09's magic. All of this set the stage for an enigmatic and phenomenal Friday.


Journal excerpt: "good things are happening, especially with that "Law/Rule of Agreement". I never intended to come to Alex Bay but this place is a gem! I love the park...and am finding a new stride. Love walking, but these [heel] blisters! Ugh! Hope to get out early to avoid the rangers again."

**Footnote: the Rule of Agreement is a concept similar to the Sidecar and Sit Down and Shut Up. It is essentially the first rule of improv -- never disagree or attempt to change the "script/storyline" that's "handed" to you. Adapt. Relinquish control and the illusion that you're writing and performing the script solo.
Posted by Todd X at 8:43:00 PM