Although I'd spent only two of the previous nine weeks at home, Monday morning's all too familiar comedy-of-errors was a stark reminder that my pack had been little more than an extravagant suitcase since late-March!

That was about to change.

As I showered, methodically packed and re-packed, and finally walked out of Buttermilk Falls State Park toward Ithaca's mysteries, I expected to be cursing my own stupid, out-of-practice "mistakes" as much as anything! Thinking back to Santa Barbara '08, I chuckled knowing it was sure to continue for a short time then thankfully pass!

Aside from the limited information Alex had given me, I had no idea what to expect of Ithaca. She had told me about Cornell, the waterfalls dotting the area, and Lake Cayuga, one of the Finger Lakes, whose southern shore was on the northwest edge of the city. She also described what she saw as an ignored and lingering racial/economic segregation; something she found intolerable.

Alex assured me the night before that she'd call me early Monday afternoon and show me around a bit of Ithaca. I hoped, but doubted, she would so was quite surprised to hear from her shortly after 1 when we decided we'd meet at the library.

I'd spent the morning trying to decide between heading north along Lake Cayuga toward Lake Ontario then Vermont, or east to Cooperstown and the Baseball Hall of Fame, then thru the Adirondack's and into Vermont. I had no inclination either way, so I resolved to let Alex secretly decide. Wherever I ended up that day, that would be my nudge & inspiration. Sounds like a song.

As I walked north toward the downtown library, a navigational error-that-wasn't led to an extra two or three mile walk. It wasn't the only time in New York that a failure to ask directions would cost me, but part of the "plan" (ha!) for New York-Maine was to get on to the back roads and walk more,  so I enjoyed this and quickly realized how much healthier I was.

Did you know walking's easier without smoking? Go figure.

Once I finally got downtown, I realized that what little of Ithaca I'd seen reminded me a bit of Asheville, NC.

Alex suggested Taughannock Falls State Park, which is on the western shore of Lake Cayuga and would launch me north. After a mile-long walk along the stone river bed, we were at the Falls watching Milkshake entertain the masses, and eventually on our way back for our final goodbyes.

I remembered telling myself when I was trying to decide between the bus and Craigslist that the deciding factor was that I'd meet more interesting people. Indeed I had, and I was glad for it. I really enjoyed Alex! 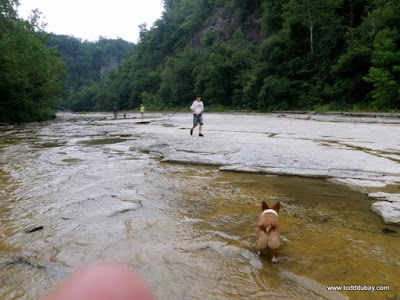 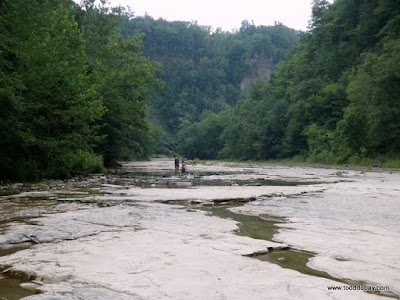 It began to pour just after Alex returned to Ithaca and, since it was already after 6, I found a nest on a hill by the campground adjacent to the park and resolved to get a jump on Tuesday.

My apparent idiocy continued to toy with me. It took way too long to set up with me forgetting where I'd put things then, when found, I commenced with my special brand of maddening silliness such as covering them up so as to immediately "lose" them again!  "Everything in its place, dumbass!"

I was thrilled to be beneath the Origami, but I was sweaty, clammy, wet and beyond frustrated with myself. I knew it would get better, but that wasn't top of mind that first night hearing what sounded like Noah's Flood outside!
Posted by Todd X at 5:04:00 PM