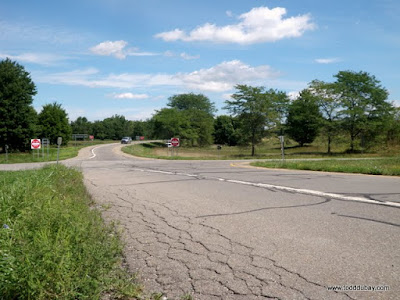 When Tuesday dawned, I was far from certain about getting to Ohio for the week’s-end rendezvous with my brother. Casey & Julia had dropped me in a great spot as far as shade, camping, and a truck stop. The problem was no traffic! It reminded me of '08's Mormon Black Hole near Pocatello!

By 9am, I had broken camp, repacked, returned with water & coffee, and hoped to quickly pass Elmira, which Julia had aptly described a bit “shady”; a vibe I’d noticed both with Alex and in ‘09 with Chris & Stacey. It seems the best of Elmira's attributes is that it is a gateway to either New York or Pennsylvania!

"WHAT THE FUCK AM I DOING HERE?"


The traffic never picked up; often as infrequent as a car every half-hour. As morning became mid-afternoon, I began to repeatedly ask, “What the fuck am I doing here?” This wasn’t in the predictable, dismissible tone of simple frustration.

Sitting in the sun, sipping water, and throwing stones at signs, I again had time to reflect back over the near-year since meeting Leslie, Lynette, and Andre, during my northern jaunt of 2009. Another baby step toward the coming reconciliation came with again seeing how much I had lost touch with what were once cornerstone beliefs.

Since leaving Port Townsend, the core energy and vibe of these little travels had changed. From Andre to Wendie all the way to Ray and my relationship with Chris, everything had taken a distinctly different, sometimes sinister tone. I had cultivated doubt in myself and my own beliefs as I dissected those of others, particularly after the Don Quixote manifesto, and now, particularly since Brian’s this summer. All the old ideas of universal synchronicity, even the 'Side Car' & 'Sit Down & Shut Up', sounded deluded and ridiculous when trying to articulate them. It was as though I’d performed a Broadway version of the R.E.M song Losing My Religion! I had hoped that this trip, to places unknown, would rekindle my sense of wonder and adventure; reignite what I’d lost and missed terribly: belief in a purpose and, to a great degree, myself.

It nearly had, until the infamous Asscrack Incident! Despite my opinions of Ginger and Ahab, I wasn’t kidding myself into thinking that it was anyone’s fault but my own, yet I couldn’t comprehend what had changed in myself in the time between meeting Lynette & Andre and now...beyond losing touch with my Innards, and that thing I call The Voice.

With such an obvious solution, it would seem easy to convince yourself to just “believe” again, and some can do that! I am not one of those people. I had inadvertently opened logic & reason’s door and wielded empirical proof as a weapon against spirituality, synchronicity, and intuition... then pointed that gun at myself! While challenging other’s possible “delusions”, I was scuttling my own foundation!

I’m sure that a few certain readers will savor my self-inflicted pain--perhaps call it Karma. Maybe deservedly so. But, you’ll need to wait for the moneyshot! For the purpose of continuity, Tuesday eventually provides New York’s companion-catalyst to the Asscrack Incident, this one a mercifully  external example helping to advance this tortuous process of spiritual realignment & growth, at least to some degree.


After five-hours, I was imagining spending next month’s birthday in Tioga Center when, out of nowhere, Levon pulled over and invited me in for a hop to Elmira. For the next 45-minutes we (mostly he) talked sociology and politics. He appeared to be in his mid to late-20’s and was on his way home to Watkins Glen after hiking a bit of the Appalachian Trail.

Levon’s father is involved in politics in some capacity, is himself is a passionate small-government Libertarian and, if I recall correctly, not a fan of The Alaskan Road Whore & her Teabagging Minions. That meant we got along beautifully! So well in fact that he offered me food, his number, and a ride to Erie, PA if I somehow became stranded and in danger of missing my Ohio connection. I like these New Yorkers!
Elmira required improvised, technical navigation. Meaning I had to walk. Levon’s drop-site was busy, but at a spot that was impossible for someone to stop. I took to the grass next to the interstate, hopped a fence, crossed a massive mall parking lot, and ultimately found accommodations on the ramp re-entering I-86 next to the airport. The heel blister had healed nicely to that point, but this little urban trek destroyed that!

Soon enough, I was in the car with “G” and on my way to Corning, famous for it’s glass making and home to CorningWare! “G” was in his 50’s and really nondescript but offered some great information on where to hop a train if I decided to AND drove me thru the pleasant little town that seemed a good place, since it was getting late in the day, to camp until Wednesday morning if needed.