Things were odd as I awoke Saturday morning to a very different Lori than was on display the night before. 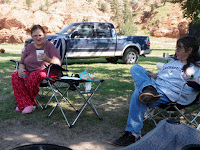 She was quietly subdued as she and Chris made breakfast and coffee while I repacked. We had some small talk as I ate their delicious potato & egg concoction, and soon I was waving goodbye and heading for a shower. I told them I'd stop back that night if I was still there, and was prepared to accept their offer of a ride to Rapid City if I hadn't left by Sunday. 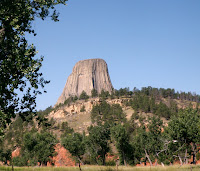 A member of KOA's Golf Kart Militia noticed my pack, and gave me a brief, sKornful inkwisition about where I had slept, thinking I had hijacked a tent sight. Nothing came of it, but it did set the tone for the remainder of my stay. It was time to leave, and I had a distinct feeling that things were about to change.

I spent a few hours relaxing outside the Trading Post before learning that there was a restaurant a half mile up the road; one I had failed noticing when Harry dropped me off. That was all that was needed to push me down the road. I had no idea what exactly I was doing, I just knew it was time.

A quick 15-minutes later, I found myself at the intersection of Route 24 looking at the restaurant. 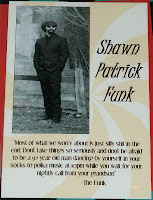 I had gotten water before leaving, so I planned to sit at the corner just to see what happened. As I was crossing the road, a small SUV passed me with a pretty young woman hanging half way out the window flashing me the thumbs-up. When I returned the gesture and smiled, they unexpectedly pulled over and my new friend-in-thumb asked me if I needed a ride. A simple "Yeah!" later she had hopped out, and I was finally on my way toward Sundance.

I had to laugh. I had sat at Devils Tower for 72- hours with nothing. After 15-minutes walking, on nothing more than intuition, I was off. The pattern was still intact, but at the time, had no idea as to the extent. As I settled in, all I could see ahead was a half-hour hop back to I-90. 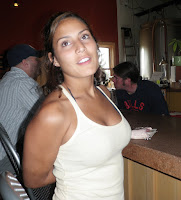 The thumb-flashing passenger was a Leslie. She was a short 21- year old who, even at first sight, flowed with raw energy. And, she was absolutely stunning. She has the looks that steals your breath for a moment. Leslie is the last kind of ride you expect to get, but as it turns out, there is nothing ordinary about her.

Driving the car was Bonnie. She struck me at first as the typical Santa Fe/Boulder progressive. Bonnie would hate the idea, but her general ideology was written all over her in pretty simple language. What I've called "being different-just like everyone else." I would learn later that, while accurate on a base level, it was an unfair assessment to make in a split second. She had a lot going on beyond typical, dictated agenda.

Leslie and Bonnie are from Chicago and were on their way home from an abbreviated road trip. They had intended to go all the way to Montana, 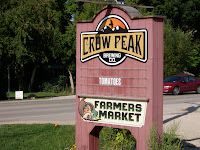 but things had come up and Bonnie needed to be back by Monday. One of the first things we talked about was how we all had common spiritual views. There was an excellent, instant rapport, and as I told them more about my travels they invited me along to Spearfish as they tried to find a microbrewery they were told about. I was none too sad to be leaving Wyoming, especially like this! This ride had all the early indications of something remarkable, and I again laughed. I had cautiously felt it coming.

The conversations continued uninterrupted into South Dakota, and the energy in the truck was addicting. Bonnie was familiar with Chris McCandless, and when I mentioned 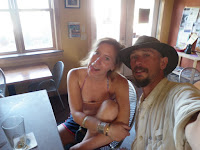 I was considering going to Carthage SD to have a beer at the bar featured in Into the Wild, my original hop to Sundance, then skip to Spearfish suddenly jumped into a pilgrimage across South Dakota.

When we pulled into the Crow Peak Brewery in Spearfish, I had permagrin. My mind's eye traveled back to Devils Tower, and I could see the perfect progression of events laid out as though they were planned. Some say that the elderly sometimes say they same things when looking back over their lives. All coincidence? Ha!

Our pit stop at Crow Peak quickly became a night out.

Leslie challenged a couple to a chugging contest while, at the same time talking the bartender into offering a t-shirt to the winner. Quite persuasive, this Leslie! I figured my shady past would be of some benefit here, so I signed up as a ringer to ensure Leslie got her shirt. It was the least I could do, after all! It was no contest. I won easily. Leslie: happy. Life: good.

Dean was one of the non- participating bystanders and had taken the picture of the contest for me. He and his wife were from Wisconsin, and the three of us were soon chatting politics and sociology. I

t was an excellent conversation, and I was beginning to realize how much I was going to enjoy these Northerners. Relatively speaking, there seemed to be an abundance of common sense borne from living life, rather than just reading about it then later simply swapping spit in a self-labeled Salon. Theme alert!

Obviously, continuing on toward Carthage Saturday night was out of the question. To add a perfect exclamation point to the day, our bartender actually offered to let us camp AT the brewery! We didn't even need to re-park.

Bonnie and I sat up for quite a while chatting about philosophy and metaphysics before going to bed. It was then that I realized that she herself was on quite a quest. 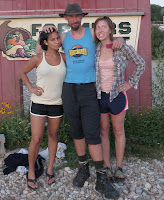 Bonnie has passion for real change, but seemed at first to think it's an institutional issue rather than individual; that the solutions are "out there." (See the Dragon Parable) She seemed to be slightly hindered by ideological dogma, but also had the Splinter in the Mind that leads, inevitably, to critical/original questioning. This way, your organic ideas are accessorized by philosophy. Most people, even those who call themselves highly educated, are vice versa. Thus, recyclers of others thoughts. Parrots. Authentic, self-awareness is not an easy process, but Bonnie has begun it. She would periodically tune-in as we chatted, and when she did, she would shine.

I was exhausted by the time I climbed into the bivy. Leslie set the alarm early; all of South Dakota and Carthage lie ahead for Sunday. A least in theory...
Posted by Todd X at 1:25:00 PM