My flight's path was over the Gulf of Mexico directly to the Yucatan Peninsula, and seeing the shoreline I was struck that, other than Juarez across the Rio Grande from I-10 in El Paso, I was finally glimpsing something other than Terra Americana/Canadia for the first time since briefly living in Germany when I was 15.

As the plane descended, it was clear from the air that this was indeed another world; one I was eager to see with my own eyes as opposed to the controlled electronic agenda-driven snapshots we are inundated with in the States. 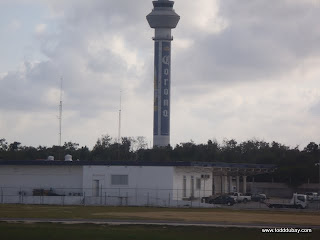 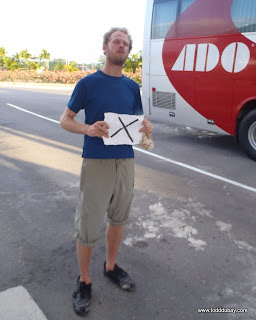 Going from 9-below to a muggy 85 in a few hours feels good! As I stepped into Mexico for the first time, I was introduced to something that would quickly become familiar: Mexicans hocking goods and services to gringos. At the aeropuerto, it's transportation to Cancun. Chris had returned to Cancun from San Cristobal and I found him exactly where he was supposed to be holding a sign that read "X"--making fun of my persistent surname quandary. The idea that we had executed this little plan and were actually on the ground in Mexico was fun and though there was no clear-cut, long term plan other than getting out of Cancun and going south, this day was a long time coming...and now here it was.

We engaged in non-stop chatter into Cancun, but I found my attention span compromised by the scenes outside the window. One of the things that grabbed my attention almost immediately, aside from the lack of order on the roadways, was the glaring lack of regulation. There were people living beneath tarps and in flimsy wooden shacks along side the road on the edge of Cancun but to me the poverty was less shocking than the fact that they were permitted to do that! I remember seeing the same thing in various tent cities in places like Fresno, except that in the US these embarrassing capitalist warts are swept out of sight--under bridges and behind train tracks. Here, it's out in the open and is inescapable. My first 30-minute bus ride was also was my first subtle nudge in what would be a long, steady reminder to question our imposed and skewed definition of "freedom".

In the short term, Tuesday night's plan was simple:

We are simple creatures after all.

The hostel Chris had checked us into was quite close to the bus station as well as 2-4 listed above. Since hostels in the US aren't hostels as much as overpriced, pretentious hotels, I had never stayed in one. Ours was 110 pesos a night (about $9.25), and our dormitory was shared with three other people: a middle-aged Canadian, a young French student and her Spanish boyfriend. The bathroom took some getting used to as well as it was unisex--including the showers.

Before long, we were sitting at a sidewalk cafe drinking Corona's, eating nachos, and chatting with Jose, a local sitting at the next table who spontaneously decided to invite himself over to join us. He spoke English, had been drinking all day, and was lamenting splitting with his wife. We had a great time, along with a predictably great many 100-peso Coronita buckets. Too many, in fact. Added to the tequila shots, they made for an expensive, partially blacked-out night.

Stop me if you've heard this story before. Despite the fact I've been only 29 for a number of years, I can't drink like that anymore. The recovery just isn't what it used to be so nights like this generally lead to wasted days-after. Thus, except for dinner and a trip to the store, Wednesday in Cancun was spent in slow motion. I was fine with that, the people were remarkably friendly but being nowhere near the resorts I expected and found Cancun to be a bit of a touristy shithole. 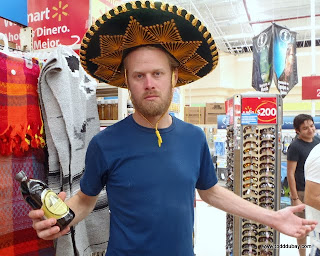 Thursday became getaway day and after a trip to Walmart and a bank to exchange dollars for pesos, we were off to the bus station for a ride down the Caribbean coast to a beautiful, memorable, and fateful date with Tulum...


Fun Fact: Upon my visit to the bank, I learned exactly how much the US bank where I'd bought pesos had (surprise!) raped me. I received nearly a full peso-per-dollar better rate in Mexico. The only nuisance was being required to provide the bank with a copy of my passport, but it's well worth it.
Posted by Todd X at 7:25:00 PM