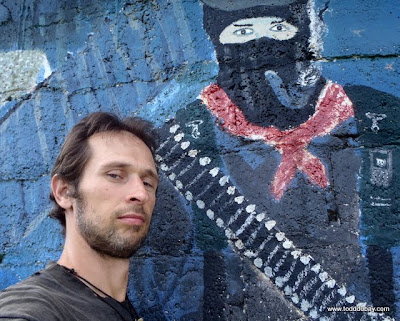 
Chiapas is an incredibly beautiful, fascinating place whose history, including the Mayan ruins in Palenque, draws visitors from around the world. Its very pheromones exude the essence of authentic and unapologetic revolution, revolt, and independence.

While Tuxtla Gutierrez is now its capitol, San Cristobal is the political and spiritual center of the local Mayan/Mestizo population, and an epicenter of the Zapatista movement that became a sensation for successfully revolting against the Mexican government in 1994. Images of Emiliano Zapata, Pancho Villa, Che Guevara, and Subcomandante Marcos are never far away and have even become an important part of the areas primary industry: tourism.


This is by no meant as a comprehensive historical account, but briefly the Zapatistas (EZLN) brand and market themselves as an indigenous movement demanding to simply be left alone to live their traditional way of life unmolested by the Mexican government.

During the '94 uprising, the Zapatistas occupied four cities in the mountains surrounding, and including, San Cristobal. After a bloody battle in Ocosingo, in the mountains a few hours northeast of San Cristobal, they eventually reached an edgy compromise with the federal government ending outward hostilities, but tensions continue today due in large part to what international watchdog groups described as a brutal government repression of the uprising. Examples included aerial bombardment of indigenous villages surrounding San Cristobal, torture, summary executions, and mass graves with much of the violence perpetrated against the unarmed, indigenous population of the area.

Being there 17-years later, it was eerily common to see fully armed troops stationed at various points around the city, particularly El Centro. 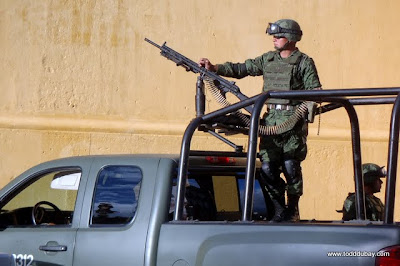 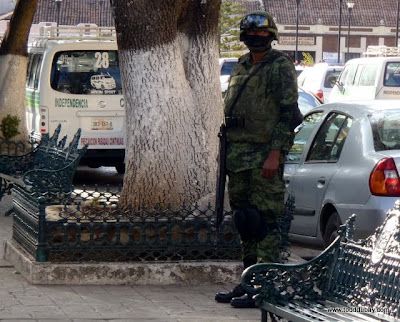 The compromise was mediated by Bishop Samuel Ruiz, who at 86 died less than a week before I arrived in Mexico. I don’t pretend to be a scholar of Ruiz, Chiapas, or the Zapatistas but his is a single story that seems to tell a great deal about the Zapatistas, San Cristobal, and Chiapas itself: 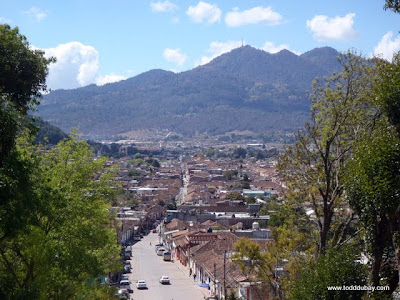 
San Cristobal de las Casas is situated at 7,000 feet in a valley that's surrounded in all directions by lush mountains and the Lacandona jungle which combine to provide an impressive backdrop for its own raw, rugged, setting. The high altitude can take some getting used to and makes for a much cooler climate than one would expect from a city this close to Guatemala. The humidity was also a fraction of Cancun's.

Despite, or perhaps because of, very high expectations my first impressions were far from glowing and I'd wager very similar to those of most Americans—at least those free to admit it: dirty, congested, and overpopulated! It appeared filled with short, rickety, graffiti-tagged old dwellings held together with binder twine and duct tape and I wondered what about this city, aside from the shrewdly marketed Zapatista/Che angle, draws so many travelers, young and old, from all over the globe. It didn’t seem to transmit or resonate on any particularly remarkable frequency but I was also aware that I'm increasingly distracted from these things lately!


On the way in to the city, we passed a fenced off collection of dilapidated, flimsy shacks tenuously perched on a steep mountainside and where the poverty seemed revoltingly astounding. It reminded me of an urban Slab City, only dirtier and without the dropout's 30 year-old RVs. I also shot back to last spring and the tent cities beside Fresno’s train tracks. The obvious difference was that this was obviously a permanent situation where they’d built homes out of whatever they could find while stateside "down-and-out" Americans subconsciously clung to the “temporary” mentality of waiting for their part of elusive American Dream to make its heroic return.

I had seen semi-permanent shelters along side the roads in and around Cancun as well, and suddenly found myself asking WHERE in the States a poverty-stricken person would be ALLOWED to erect a little shack and live in it! Can you imagine me building a wooden shack on the side of the road near South Beach or Santa Barbara? There's a reason America's long term homeless live in tents, beneath bridges, and next to the train tracks. They're constantly rousted from wherever they're an "inconvenient" reminder of Capitalism's limitations and, if the Machine is lucky, eventually shuffled out of sight.

Inside this homemade tenement complex, I once again saw loads of kids playing with whatever they could find. There was a fleeting, familiar thought reminding me that happiness is relative; a poor, happy kid kicking his can will always be more content then the fundamentally miserable aristoBrat riding high atop his new pony. No matter how pretty his “pony,” it won't make him happy for long. Don't tell him though!


Congested traffic clogging narrow streets instantly showed the futility of driving in San Cristobal and I began paying closer attention to the ever-present minivan taxis I had noticed in Cancun and Tulum: the colectivos. Next to walking, the colectivo is the primary public transportation and inexpensive means around town for those who chose not to pay for taxis, which also swarmed the city. I was happy to learn that the collectivo cost $4.50MX (about 40 cents) as opposed to 30-40 pesos for a comparable taxi ride.


Later on I’d learn the catch, of course, was that you had to often share cramped benches with others along the way. It was not much of a catch because the folks sharing your ride were always polite, greeting each other with “Buenos tardes/noches!” when boarding and just interesting to observe! The people watching was exquisite, although the children always found we ridiculously tall, goofy looking gringos great curiosities themselves! 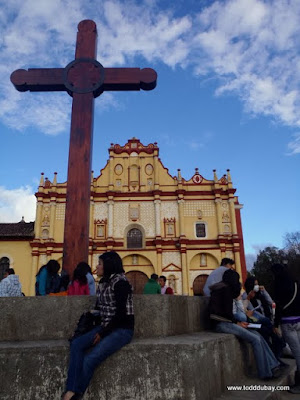 Despite being a city of 150-200-thousand people, there were few buildings taller than 3-5 stories, except of course for its prominent churches. They were the landmarks by which, since the streets for the most part looked the same, I quickly learned to orient myself. As we walked toward “El Centro,” the plaza area at the center of downtown’s cultural activities, my head was on a swivel; by now I’d noticed the variety of languages spoken on the streets and the people watching was always fascinating.There was no sign of anything overtly corporate downtown, at least not that I noticed.
The pedestrian street (Guadalupe) reminded me of Denver’s 16th St. Mall in that it was clearly the heart of a popular tourist shopping district. It was closed off to traffic with specialty shops lining both sides hocking everything from Ambar to the ever-present Zapatista trinkets. That being said, it stood in stark contrast, in both people and energy, to Cancun/Tulum. In a general way, comparing Mexico’s commercialized tourist meccas to San Cristobal would be something like comparing Daytona Beach and Dayton.


By now, I had grown used to negotiating prices and having peddlers and merchants aggressively trying to lure me into their lairs. I'd quickly learned that they were not interested in any conversation beyond bartering, so a verbal escape plan was useless! It was much better to just smile and keep moving! Curiously, however, the panhandling tactic ceased on Guadalupe St.; it appeared that perhaps they had realized it was counterproductive, at least with gringos!

Carrie
Returning to San Cristobal energized The Friar and he was immediately on his phone and leading the way to meet his friend, Carrie, and her cohorts for midday drinks. Thanks to my pesky little illness, I wasn’t much of a social butterfly and besides, for the first time ever, my voice had begun to vanish!

Carrie, however, was entertainment enough for everyone. From the beginning, she displayed a high-energy personality and proved to be that rarest of rarities: a woman who makes me laugh! (Some people label that sexist. Fuck them; for whatever reason it seldom happens so when it does, I appreciate it!)

Carrie and the rest of her American friends were, I believe, all in Mexico for a wedding and catching a bus an hour or two west to Tuxtla Gutierrez later that afternoon. Despite significant hippie characteristics and lacking both the accent and signs of inbreeding, Carrie willingly claimed Kentucky as home. At some point, she had simply decided to stay in Mexico...indefinitely...after the wedding. I liked her immediately.

Apart from her sense of adventure and talkative, humorous personality, the first things I noticed about Carrie were her height, (5’10” if not taller) and dark, sympathetic, thoughtful eyes that made me wonder (beyond humor and sarcasm) what was going on behind them. She was briefly exposed to the easily transmitted Enrique Virus the month before, and it became clear in time that this episode had triggered an unnatural fascination bordering on a self-admitted obsession with Latino “photographers.” A horrific, Sally Struthers style affliction to be sure.

Also, I at first naturally assumed Carrie’s voice was hoarse from overuse but as it turned out she was exiting the same laryngitis ride I was just boarding. Whatever it was, our shared illness had pestered her in varying degrees for several weeks so it was clear that this was not vanishing in a day or two.

Chris had arranged accommodations at a Couchsurfer’s place on the outskirts of town. He had met Jose Luis in January and explained how he usually had several Couchsurfers on-hand and lived in a country setting where we would be able to stay for perhaps as long as a week. All we had to do was get there, which made for an interesting and pleasant 40-minute exploratory walk to the west end of the city. 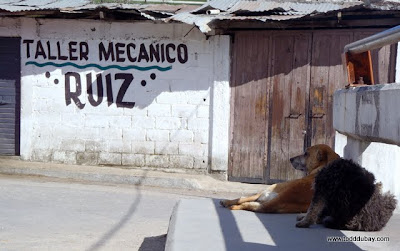 Leaving the shopping district offered a neat snapshot of life in San Cristobal. All the streets, with a few exceptions, continued to look the same while the name and numbering systems made no damn sense! I felt lost immediately, even though the route was straightforward with only a couple turns! The buildings were all block-long, indistinct strings of identical architecture with what seemed to be an abnormally high number of tiny markets; the same kinds I’d seen from the bus. Stray dogs were everywhere.

Being a virginal gringo in Mexico means continuous adaptation, in my case specifically in being an illiterate minority and all that entails. In Cancun, along with the signs, nearly everyone speaks English and you literally ARE your American dollars, so everyone’s smiling--as long as you’re spending them.

In San Cristobal it’s different. For the most part, few paid attention although I occasionally caught glances ranging from surprise (see: redneck spies unfamiliar black guy in rural Michigan) to disdain (see: redneck spies any black guy in rural Mississippi). Incidentally, if you’re offended by my barbaric “generalizations,” may I suggest we spend a week or two together in rural Mississippi this summer?

After hearing the American Bloodbath Media squawking about Mexicans hating, kidnapping, and killing what seemed like billions of "innocent" Americans, I was prepared for the worst but not shocked by the reality: general indifference. Furthermore, outside of the tourist areas I was struck by an overall polite vibe and the impression that locals were prepared for gringos to be assholes, but when given a reason to believe otherwise were eager to embrace it. Smile, look them in the eye, and acknowledge their existence, and passersby returned the courtesy with interest.

As you can tell, I was in the middle of ecstatic sensory overload! Everything was new, expectations and preconceived notions were obliterated by the minute, and perspectives quickly re-calibrated. That would have some surprising results, even by my standards.