Pardon me while I indulge myself by highlighting a distinction...and brag for a moment.

The following few paragraphs are a clear example of what distinguishes your humble scribe and the countless, redundant "Moonbeam Travel Writers" who seem to fart politically correct cliches while babbling about things like an “amaaaaazing cultural diversity” found and bound together by a “common fundamental belief in human dignity, individual freedom, and national sovereignty” neatly encompassed, “both in name and atmosphere inside San Cristobal’s most famous night spot and social beacon": The Revolution Bar.

Horseshit. If you see this cloned hippie: beat-bathe-repeat.

Forty-years ago, the hippies would have pointed to that last line as an excuse to, “never trust anyone over thirty!” As the regular reader knows, I’m still/perpetually 29. Yet, more important than my personal delusion, is this question: why aren’t the vast majority of those old hippies hippies anymore? Did ALL of their "hearts die"? Did the “man” beat all of them down? I’ll bet the answer is found inside a metaphorical instruction manual entitled, “Life After the Echo Chamber”. Take my word for it. I'm an expert on these things.

Revolution is also popular with other unique demographics: Latino twenty-somethings channeling Che, at least in fashion and hygiene, and who are a local breed wise enough to hunt where the flock gathers.

The cosmic point where these primal forces of identity converge fascinates me!

Picture the self-deluded, cocky pretension of a cute, young, European/American college woman saddled up alongside a sly, wolfishly charismatic, young compañero. Then eavesdrop as her young Latino suitor methodically fattens her liberal, guilt-ridden Anglo-ego with accented words and stiff drinks, just waiting for the opportunity to feed!

So common is the practice, that the locals have an insulting name for these guys: Gringa Fuckers. Supposedly cultured, traveled, and "educated" young women have clear, generic (not "genetic") traits that make them easy prey for the savvy predator, but, be warned: DO NOT tell them so! THEY, of course, are building bridges, broadening their cultural horizons and “expressing their individualism”. Perhaps doggy style...just like everybody else.

A DEAL CONCEIVED AT REVOLUTION

Shitty as I found it, Revolution is the place for live music, a passion for James, so we predictably had landed here Monday night long after the Posheria. Chris saw a woman he knew from volunteering at a cultural center, and following a lengthy conversation over loud music, and conducted in his limited Spanish, Chris shared that she had offered a place to rent...dirt cheap. Her only hangup was me. Marci knew Chris and was eager to have him there, but was much less enthusiastic about my presence! He made it clear that any arrangement would be for both of us, to which she eventually agreed, and invited us to see it Wednesday.

Carrie recommended the Posada 5 Hostel and it was exactly what we needed. Cheap camping inside a walled-in back yard, a kitchen, wireless Internet, and showers! For less than $4 each, we had a place to pitch my Origami Tuesday night before our appointment. To kill time, we took a tour of different parts of the city and had dinner with Scott and Laura, an American couple we had met at the Lobo Inn in Tulum and who had just arrived in San Cristobal. 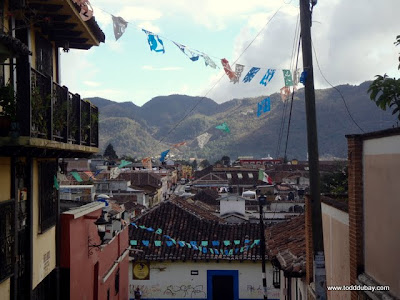 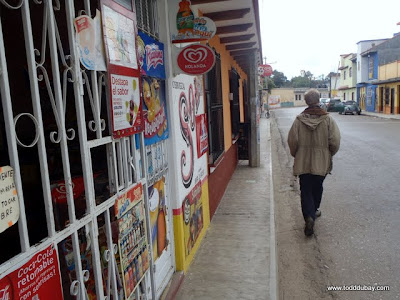 Wednesday arrived carrying hope and anticipation. Spanish, or my lack of it, and our failure to block out time to practice had become a nuisance and regular topic of conversation. We blamed “distractions” and declared that having an apartment for a month was exactly what we needed: our own space. It would cost less than a hostel, so it wouldn’t take the Taj Mahal to make this an agreeable situation!

The apartment was a brisk walk from El Centro and in a seemingly nondescript neighborhood with the typical single-level, block-long structure. The only detail seen from the outside was her ordinary black door and, judging by the exterior, I expected a two room roach nest.

I was dumbfounded once we were inside.

The apartment consisted of two mostly empty large rooms moving front to back from the street, followed by Marci’s bedroom at the back of the main building. Yes, main building. Behind it was a enclosed courtyard completely concealed from the world by a tall concrete wall. Inside her skinny courtyard was another small, single room building that served as the kitchen and behind it was an open space for a hammock and a clothes sink. On top of the wall was the Mexican Security System: broken soda/beer bottles set like spikes directly into the concrete! They were thick, sharp, and set close enough together in great enough numbers that I was certain there was NO way ANYONE was climbing over that wall! 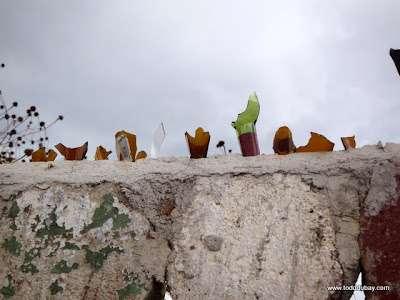 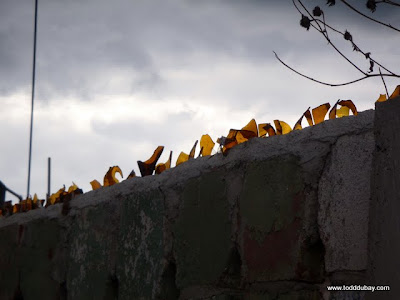 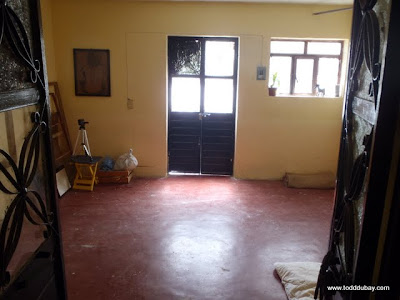 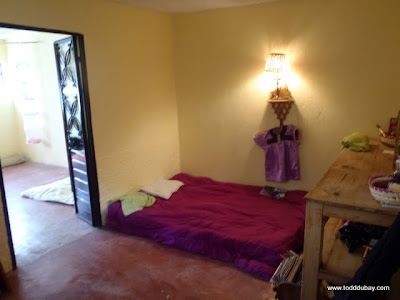 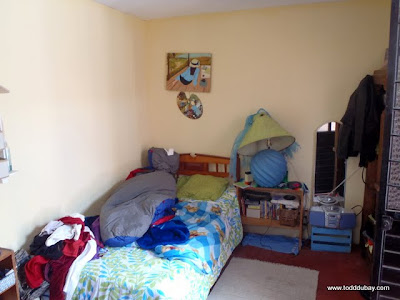 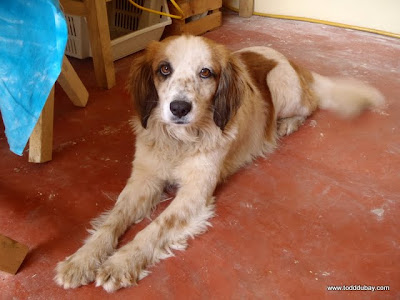 The place even came with a friendly little dog, Charley. All this for less than a hostel. The more we looked around, the more stoked we were.

We happily paid Marci, got the key, bid her farewell as she headed off, then just sat around laughing at our luck! This was perfect; exactly what we needed. 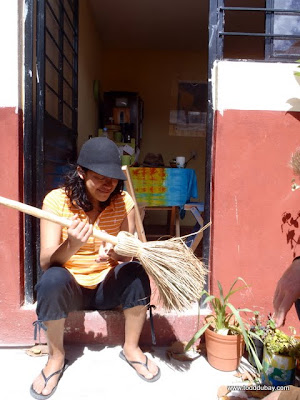 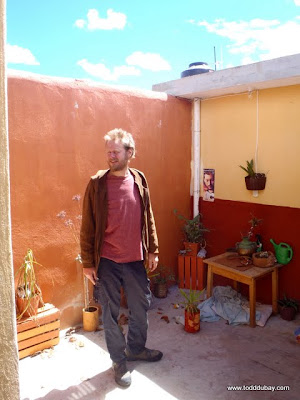 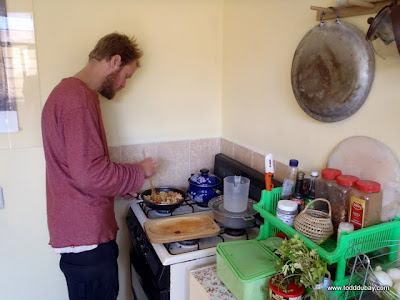 The kitchen demanded a trip to the market for provisions and cooking fajitas turned into a prodigious production. When we finally sat down with Charley at our feet and feasted, Chris was particularly happy. This was the first place he could call his, even temporarily, in nearly two years. He took joy in it.
We had just settled in when, at about 10:00, the door surprisingly opened. It was Marci. Marci was inexplicably horrified to find Chris set up on her bed, and I was horrified by her horror! What was she doing here? I thought she was staying at the cultural center!

There was a monumental communication breakdown during the negotiation process; somewhere clear understanding had fallen into the chasms that lie between their Spanish/English language barriers. This was not “our” place; we were Marci’s roommates.

With that, the excitement that had defined the entire day deflated. Marci put us to work sewing pillows and practicing Spanish with the knowledge that, while the prospect of being a roommate wasn’t terrible, it wasn’t what either of us expected. Or wanted.

As disappointing as it was, it was still a decent situation. We hadn’t signed anything, and Laina and I had begun exploratory conversations about her possibly flying to Cancun in late March, so I wasn’t sure how long I wanted to remain in San Cristobal. I had paid only for a couple weeks so as Thursday came, I settled in hoping to make the best of it. 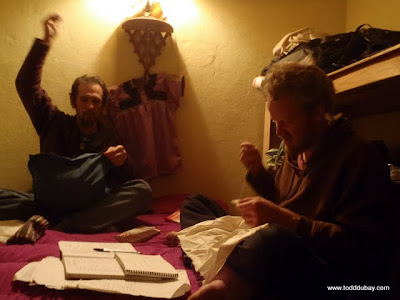 Friday morning, Chris said something to the effect that Marci now had a friend coming into town and there were going to be complications with where they’d stay. “Complications” that somehow seemed to surround me. With that, my blood shot to a boil and I told Chris it was time for me to go. When I understood the raw basics of the discussion, my rational brain immediately deactivated so I’m unsure that I understand what the “complications” were; I do know my frustration level had increased steadily since “The Misunderstanding” and, at that point, I‘d much rather have been hitching, camping, or at a hostel. Chris agreed and we began gathering our things.

Surprisingly, Marci was understanding and even showed sincere disappointment when he told her we were moving on...and that we’d like a refund minus the time we were there. She readily agreed, returned my cash, and promised she’d have Chris’s the following Monday. I had no reason to be, but I was skeptical.

My reflexive response was to leave San Cristobal immediately, and I suggested that we hitch to either the Gulf or the Pacific to get some sun and surf. Chris loved that, but since we had to wait for Marci to refund his rent we were tethered to San Cristobal through the weekend.

We settled beneath the Origami at another hostel where we supposedly could stay for the weekend and study Spanish. We did very little of either...
Posted by Todd X at 12:13:00 AM