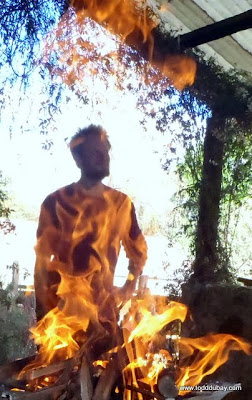 With entirely too much beef and chicken that would go missing in the hostel's kitchen, we had an excuse for a Saturday barbecue with James and Maarja. Several of us spent the afternoon gorging and discovered that Maarja’s Aunt and Uncle, Eevi and Jan, would arrive in San Cristobal in a few days. James and Maarja wanted to do something special with them, so we discussed a six-man Combi-roadtrip to Palenque. Suddenly, abandoning San Cristobal on Monday seemed rash, and as the day ended we had made plans to take the Combi on a more immediate mini-trip: to a nearby indigenous village, San Juan de Chumula, on Sunday.

Chumula is a popular "getaway" tourist destination 20-30 minutes away. We were joined by Gaili, an attractive Estonian photographer in her early 30‘s who was Couchsurfing with Jose Luis. Popular or not, Chumula spewed the most negative, black, unfriendly vibe of any spot I’d encounter in Mexico. There was the barely concealed scent of a strained tolerance--one only exchanged for gringo dollars and a sale I refused--aside from a bag of guavas I shared with village/street kids.

The entire Chumula “attraction” seemed to revolve around the church and its adjacent marketplace, one significantly smaller than San Cristobal’s.

I may have missed the point, but from my perspective the church was a tourist folly to be avoided since it cost money just to step inside! Then, once you've purchased access to their church, photography was strictly forbidden and prosecutable, as were photos of the dozens of church/government leaders scurrying around in fuzzy, furry, little costumes; ones that evoked images of a cuddly Ewok Bureaucracy.

Despite it all, Gaili, a truly gifted photographer, snapped dozens of incredible shots of Chumula and its diminutive little people while I managed my share...within their rules. 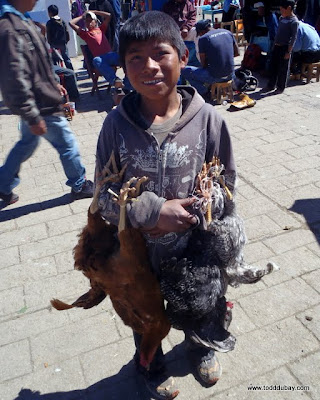 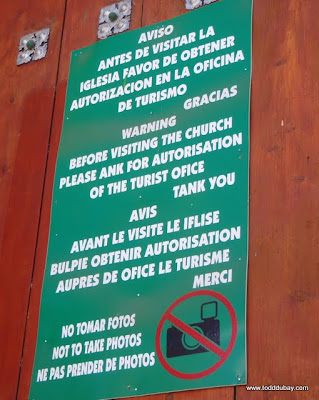 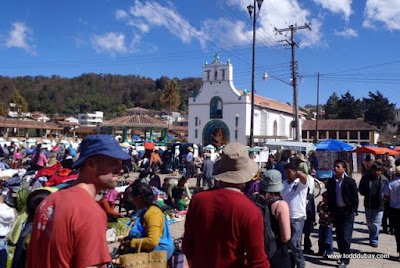 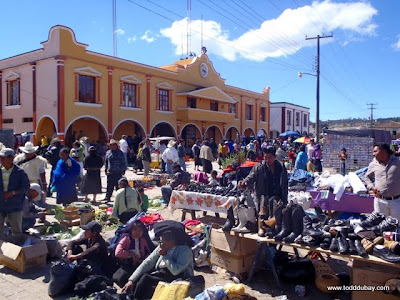 An argument erupted with a “parking attendant” who tried to extort James when we tried to leave; one eventually including the obligatory threat to involve the police. The "attendant" didn't get a nickel, and for the first time I saw the James/Maarja partnership in action. Despite his cheeky appearance, James is quick, sarcastic, and sharp. He takes no shit from Mexican con men while Maarja speaks much better Spanish and is much more subdued--creating a subtle "good cop/bad cop" effect; an entertaining and effective combination! Watching their personalities meld while negotiating, then exploiting, bartering Mexicans would become daily theater.


We spent Sunday evening with Carrie and some fellow Posada 5 hostelers at a tourist bar for a vaudeville-type show put on by a large group of local performers...including Marci! They spoke only Spanish, but context combined brilliantly with my limited (yet growing) vocabulary making it hilarious.


Marci refunded Chris's rent Monday, as promised, and we joined Carrie back at the Posada 5. Tuesday featured a fateful visit to Chris’s Spanish school where pondering putting my Spanish training in the hands of professionals was followed by a hike up an insane number of steps leading to the Guadalupe church--where we immediately saw Maarja along with her aunt and uncle! Jan and Eevi wanted to see Palenque and the ocean, they were leaving in the next day or two...and we could come along if we'd chip in. 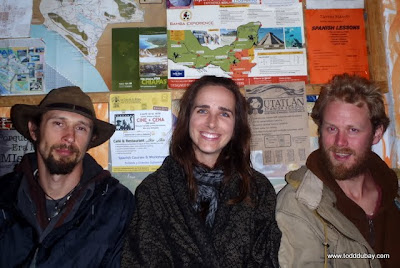 We exchanged emails from there and in the meantime met one of the most interesting Aussies ever: Erik. He was traveling Mexico with his partner and their young son and were soon to be making their way north to the States.

Erik displayed a remarkable depth of knowledge combined with an impressive mental access to detail during the couple of hours we discussed Mayan sites, culture, mythology, and demise (as well as general social collapse theory) sitting around Posada 5’s kitchen table. Erik said that if we were going to Palenque we should definitely stop at another, lesser known site half way there and near Ocosingo: Tonina (toe-nee-NAH). His was a recommendation you instinctively took seriously, so I wrote it down wishing I’d got the chance to know him better.


James and Maarja decided they were leaving Thursday. We set up a place to meet and prepared to leave San Cristobal, possibly for good. Chris and I wanted to be sure that we had the option to exit the Combi if things proved awkward or simply too crowded. James, thankfully, would have no trouble expressing either, one of the things we liked most about him, so we took everything in case San Cristobal remained forever in the rearview.


To say "Thursday began an epic adventure" would be both cliche' and an understatement. Not only would it go well past Palenque, it would unwrap and present southern Mexico to me. By the time it ended, my immediate future would have more clarity, my relationship with Chris would be further textured and slightly altered and, shockingly, I would surprisingly tap into a dormant reserve of *gasp* patriotic pride!