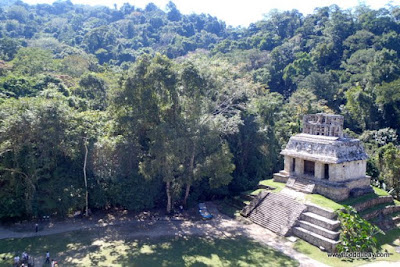 Saturday would prove to be the zenith of the road-trip. These are days that are conceived at a bizarre cosmic confluence where Life and Experience converge and create a torrent that can neither be dammed, crossed, nor navigated. Only ridden. These are the seldom-found days I live for. Days that toy with innate fear and contrived expectations while literally clawing at your senses and, upon reflection, leave in its wake deep traces on the soul. The sights, sounds, even the smells, remain---just mind’s eye glance away. Among the last few year's follies and escapades, this particular Saturday ranks near the top--along side my first night camping on the Pacific, the Oregon train-hop, and MasterCrafting the Willamette River on my weekend pass into Portland Aristocracy with Andre.

This day reminds me of the quote used in Sean Penn’s beautifully produced but otherwise ridiculous Into the Wild:

"...the sea's only gifts are harsh blows and, occasionally, the chance to feel strong. Now, I don't know much about the sea, but I do know that that's the way it is here. And I also know how important it is in life not necessarily to be strong but to feel strong, to measure yourself at least once, to find yourself at least once in the most ancient of human conditions, facing blind, deaf stone alone, with nothing to help you but your own hands and your own head..." —Primo Levi

Now, I’m not deluding myself into thinking that I was anywhere near the “most ancient of human conditions.” But, for a short time the pulse of youth quickened; the vitality born only through the discovery of life returned; the ecstasy of possibility once again sprung from the illusion that time is still a friend. A brutality of life is that when we are young we’re oblivious to how quickly life snatches that away.
To summarize: fuckin’ groovy! Yet, it didn’t exactly start that way.


We woke to our neighbors frantically asking about and searching for their dog. I told them he’d run through our campsite chasing something and we hadn’t seen him after that. After maybe 30-minutes, they packed up their VW with looks of overwhelming sadness and left--without the Lab. That was quite quick to give up, I thought, and cruel to leave the dog lost in the Palenque jungle when they were the ones who bought him in.
They hadn’t “left” him behind. The dog was dead.


The yelp we had heard wasn’t the sound of displeasure with an uninvited middle-of-the-night visit. He had decided to investigate something he shouldn't have. Probably a snake. His aggressive, reckless curiosity led him to one of Palenque’s serpents, and judging by the silence following the yelp, no whimpers or whines, it was a formidable one.
Here was a blunt reminder of our location and a continuation of the subtly black, unforgiving vibe I sensed permeating Mexico since my arrival; one demanding preparation and personal accountability. Like protecting your dog in an unfamiliar jungle. This wasn’t Marin County where concerns were confined to poison oak and scrawny coyotes sniffing out peanut butter. While not hanging from every branch, here resided camouflaged, slithering creatures that could kill you!
Snide condescension aside, I felt for the owners. They lost a pet they cared about and were obviously overcome with grief and regret. But, I must confess: beyond a sense of needless loss, I didn’t mourn the dog. My flashback to the Baton Rouge carnie camp was intense and I continued to project my resurrected shock and sickened-disgust directly onto this dog. Each of us have nerves that, while scarred  over, remain sensitive and trigger sudden, unexpected bolts of pain; ones seemingly unrelated to each other with deeply rooted connections concealed even from ourselves. This served as both a reminder and elementary reintroduction to a theme that went temporarily dormant, then re-awakened triggering mild inner-seismic activity all summer.
With doggy-death as the backdrop for a morning filled with hygiene and food, the six of us jumped a flimsy fence and stumbled blindly into the jungle armed only with sketchy intel from The Hippies. (“Hop the fence, turn right and follow the stream.”) We could have paid, but the camping costs were excessive (at least by our self-imposed pauper standards) and besides, what fun would that be? Navigating authentic jungle to see the world-famous Palenque ruins for free? Hell yeah! THAT’S adventure!
We were immediately immersed in a scene from Apocolypto. (Literally. Much of the movie was shot in nearby Veracruz and Tuxla.) I immediately noticed the density of vegetation, the height and width of the massive trees, and the lack of light! I was disappointed with California’s Redwoods but these astounded me! Also, while the campground sweltered in the sun, our thick canopy shadowed and cooled things dramatically. Unfortunately, the tradeoff for cooler temps was that there was barely enough light to take good pictures. 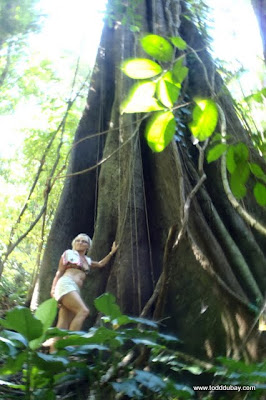 We quickly found the stream, it quickly veered away from the road deeper into the jungle, and we suddenly found ourselves scaling small waterfalls! Standing with my head doused in clear, cool waterfalls, I was consumed with a sheer sense of BadAsstitude! Here I was, navigating a Mexican jungle, climbing seemingly random waterfalls, trying to sneak into the word famous Palenque ruins! Not Bash Bish State Park...Palenque! 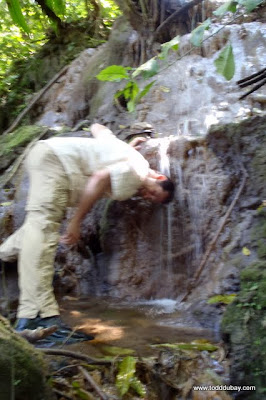 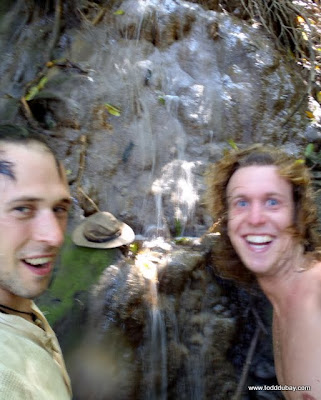 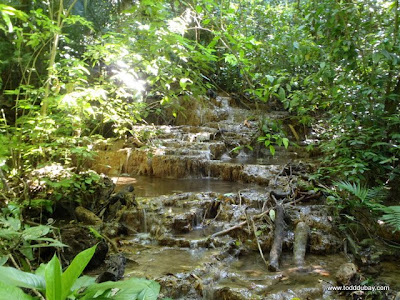 We chanced upon stone structures lining our stream’s banks. I didn’t think much of them since they didn’t seem out of place until I realized: these were part of authentic, nearly undisturbed, overgrown Mayan infrastructure! This drove my suppressed inner-geek batshit; I could have spent days snooping here and this was just the beginning. Our hikes continued to disclose hints of something I would later learn was actually extensive: most of Palenque, (most Mayan sites in general) remain hidden by wilderness.
FUN FACT: With an intense interest in history and antiques, I considered archaeology long before radio. Problem: I thought there was no apparent path to making a decent living at it, while radio seemed "stable."Oops!
Without warning, we were on-site and climbing out of the jungle. Bewildered tourists peered into the jungle canopy clearly wondering if we were narco-trafficers, banditos, or perhaps a lost troop of the world-famous, mythical Chiapas Laughing Monkeys. I snapped a photo dripping with mischievous glee and the anticipation of what lie ahead. 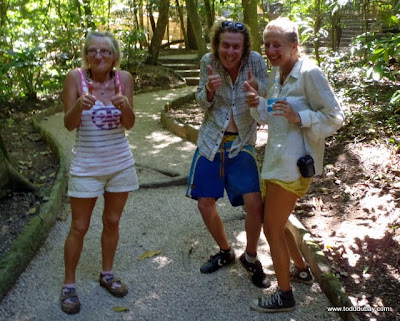 We made our way thru the park, leisurely taking everything in. We hadn’t paid, so we lacked the park's wristbands leading to occasionally tense moments--at least until it was clear that the employees didn’t give a shit so long as we weren’t blatant or causing trouble! We weren’t worth the bother and besides--a few pesos would distract them.


Palenque is much larger than Toniná and Tulum. It’s also clean, manicured, and exuded familiarity after seeing the ruins in print over the years. Tour guides offered history lessons, which I eavesdropped on whenever possible while simultaneously exploring every nook I could. 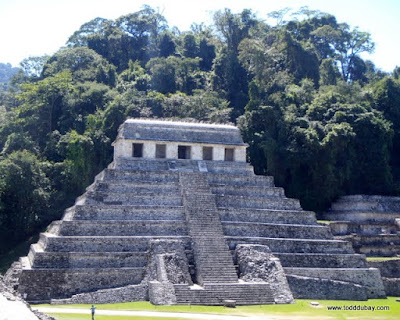 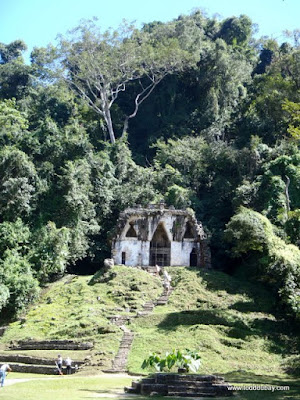 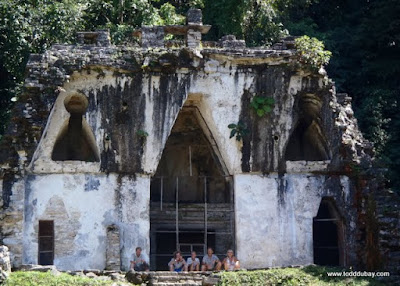 After a couple of hours, which included a James nipping Chris in impromptu race up the steps of a temple, the heat had zapped us. We’d seen Palenque, and our return jungle expedition revealed more hidden ruins including in-ground aqueducts doubling as bat caves and buildings long-ago reclaimed by jungle; buildings so large they were impossible to photograph effectively. 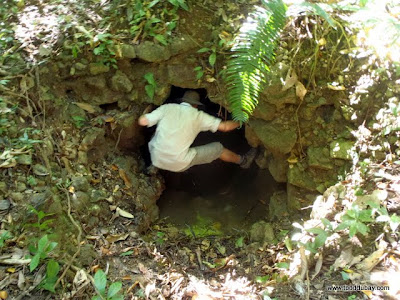 
An impromptu climbing demonstration took place back at the campground, followed by a refreshing trip to the pool, and...more climbing! The latter: Chris's proud display of strength, courage, and industry! He tested his machete-wielding skills on a family of innocent coconut trees living peaceful, unassuming lives in trees lining the road to the campground. James had learned by now that any minuscule dose of encouragement would keep him climbing. And, climb he did...tree after tree...for an hour. At the end, he was exhausted and had shredded the insides of his legs! But, with positive payoff: several coconuts! 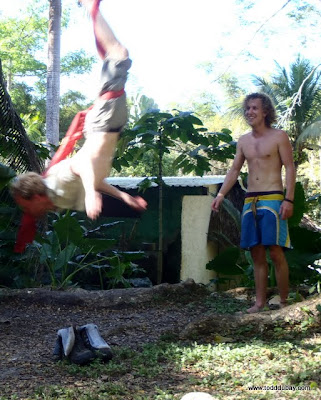 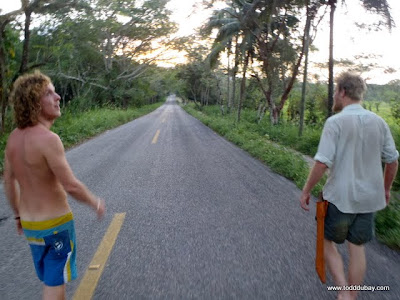 After a shower, dinner, an overpriced beer from the campground’s bar, and a failed attempt at Internetting, this remarkable day ended.
James decided we’d give Mauricio's “proper jungle” a shot, so Sunday's plan was to rise early (before the campground came to collect for our second night of camping) and get on the road toward Bonampak, near the Guatemala border. If Palenque wasn’t “proper jungle” I was eager to see what was! I envisioned a cross between Planet of the Apes, Apocolypto, and, if I was lucky, reenacting the Peace Corps scene from Airplane with added wild grinder monkeys.