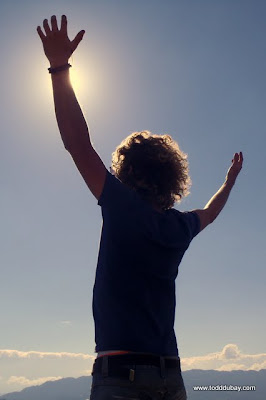 Aside from Canada and perhaps Iceland*, all cultures have redeeming qualities. While Brits excel at random acts of snobbery and snotty sarcasm, I’ve rarely heard them described as "skilled" drivers. Combined with learning to drive on the left side of the road it's clear that James has overcome staggering odds. On display was authentic skill; it wasn't easy snaking a power-steeringless Combi through Chumula’s tight, steep streets!

I imagine the stereotypical NASCAR fan would resent James’s blatant literacy. Or, perhaps they'd just see all that readin', writin', and addin', as "faggy".** But, just for fun, imagine the redneck's horror (and repeated flurry of the word “fag”) upon seeing he also boasted mastery of the temperamental clutch and idiosyncratic gears! He displayed both skills flawlessly on Sunday, in reverse, while liberating us from the extortionist's hillside parking lot.


James knew his Combi. James understood Mexico’s roadways. James was our captain. No one even suggested another helmsman until days later, when midnight fatigue and brazen overconfidence corrupted basic judgment leading to our new navigator (Chris) having a close encounter with an approaching semi!

James decided against Tulum as a final destination in favor of an improvised visit to the much closer Gulf Coast. He had also learned of a park near Bonampak, close to the Guatemala border, described as “proper jungle”; a place we could almost literally camp with the monkeys.

Considering our pace, further NASCAR references would be silly. Our bright yellow, early 70's, air-cooled Combi sputtered into the mountains late Thursday morning with Maarja’s uncle (Jan), Chris, and I on the rear bench seat; silently staking out our unspoken assigned seats. From then on, whenever we boarded we assumed the same spots: Jan at the left window, Chris in the middle, and I at the door. Up front, Maarja had the passenger’s seat, and her aunt, Eevi, sat on a pillow atop a customized middle console that doubled as a hidden safe. There was little spare room but it was perfectly comfortable.

We had all the luxuries one would expect of grizzled, hardened, intrepid adventurers: a gas stove complete with cookware and a small foldout table, a built-in inverter, and several Internet devices! The rear bench folded out into Jan and Eevi’s double bed while the roof hid James and Maarja’s.

Hopefully protecting our “cred” with you would-be Survivorman Critics at home eating Ruffles, Chris and I would need to find places outside for our bivies every night while repelling Jaguars, Black Mambas, and cannibalistic Mayan narco-traffickers with nothing more than bloody fists and broken sticks.***

I never tired of the twisting road between San Cristobal and Ocosingo. With its little indigenous/Zapatista villages and incredible views, it’s easy to get lose yourself in a landscape that, like so much of Mexico, was magnetic but not obliged to mercy.

James hoped to stop for the night somewhere between San Cristobal and Palenque hoping for an early jump on Friday, so I shared Erik’s recommendation of Tonina, the Mayan ruins outside Ocosingo--and almost exactly half way to Palenque.

A few hours later, we descended into Ocosingo, which is situated in foothills on the edge of a large valley and easily the largest city around. Lacking any of San Cristobal’s character, charm, and (not coincidentally) tourist dollars, there was a raw, dirty, but disturbingly alluring vibe oozing thru the narrow, dingy streets; streets that once bore witness to guerilla warfare and the federal government’s harsh crackdown on the Zapatistas. Everywhere I looked, I expected to see bullet holes and masked rebels--seventeen years later. On the surface, the city would never betray the significant Mayan ruins just fifteen miles...and metaphorically light years...away.

Like Egypt, Greece, and Machu Picchu, Mayan ruins have fascinated me since I was a kid. I’d hoped to see them in person, but assumed I would sooner see Giza than Chichen Itza, Tikal, or Palenque. Why would I ever travel to THAT part of Mexico? I found my answer in the back of a crowded, increasingly warm VW Combi.

Toniná is set in the middle of pastoral farmland and, with the mountains as a backdrop, its scenery reminded me of a Mexican Idaho! When the large, singular gray ruins suddenly appeared off in the distance, I was struck as much by what they weren’t as what they were. Rather than a colossal monument defying nature and testifying to the accomplishments of man, it was a part of everything surrounding it. Both literally and in the abstract, it was part of the surrounding landscape; it was built directly into a hillside. 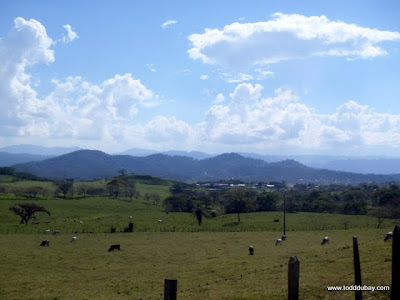 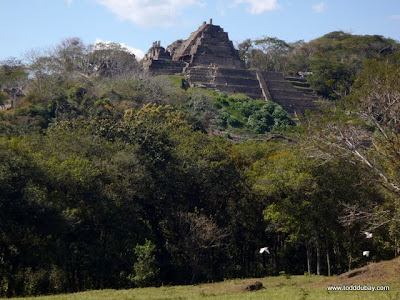 At its height, Toniná was usually at war with Palenque and ultimately became the dominant city of this part of the Mayan Region. Despite that, Toniná isn’t a famous, sprawling tourist complex like Palenque or Chichen Itza. While potentially on-par with Tikal when it's fully excavated, what’s visible right now is one massive ruin consisting of terraces on which sit what’s left of ancient temples. A plaza area sits at the base of the main structure and once featured carved monuments and a “ballcourt”. 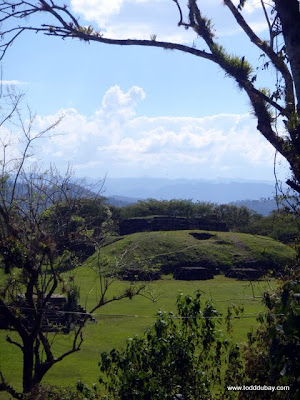 It was constructed in step-pyramid style, and despite the hazards of the skinny “steps”, you can climb all the way to the top; something that could never happen in the US because of liability concerns; “someone might get hurt!”

For our risk...and effort...we were rewarded with stunning, 360-degree views of the lush green valley, high jungle, and wall of ragged mountains, including those we spent the afternoon crossing. From the top, Toniná is as beautiful as Ocosingo is nasty; I sensed, perhaps even felt, why this group of Mayans built their city here. 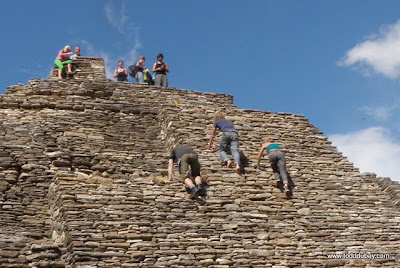 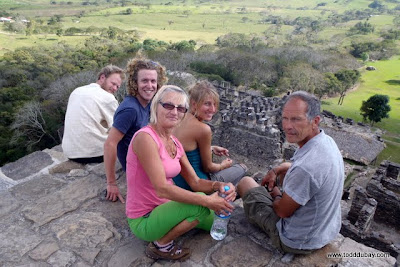 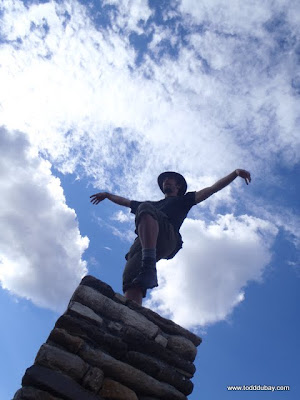 There were only a handful of others exploring with us, and the next couple of hours were spent climbing on, in, and around the main structure and imagining things like where sacrifices might have taken place! You could overlook this complex that housed thousands of Mayans and imagine the multitudes massed beneath you. Or, as you approach it’s base at ground level, look up at the imposing structure and almost see King Garra de Jaguar, (Jaguar Claw). 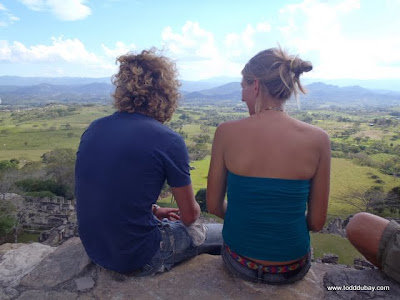 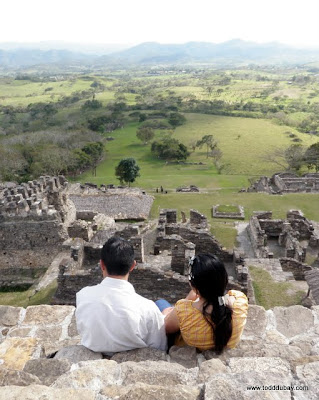 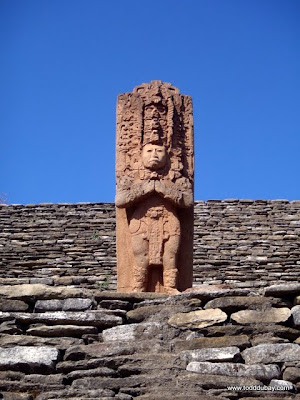 The campground was less a “campground” than a big back yard! However, it was empty and, after James and Maarja negotiated the price down to next to nothing: perfect.

Gathering wood, we met some friends who would be persistent, painful companions over the next several days: fire ants! They weren’t an issue sitting around the fire Thursday night drinking James’s liquor, but that would soon change--especially for Chris--and we’d learn first-hand just how single-minded and organized these relentless little fuckers could be! 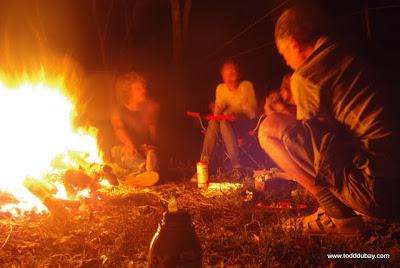 On the rare occasion when Jan decided to speak, it was in reasonably good English with a thick,  Russian accent; one that begged the phrase “Moose & Squirrel”! He possessed that rare, calm demeanor born, not of self-consciousness, but self-confidence. Jan didn’t feel the need to engage or impress anything upon anyone. He wasn’t one to offer (or suffer) the banalities of small talk.

Tall and thin, but still brawny and roughnecked, Jan owned a construction company in Estonia and, despite being 60, was an incredible physical specimen. You could tell he’d worked hard and could do anything with his hands. James had repeatedly told us about his one-armed wood chopping demonstration in San Cristobal. One arm? If I tried that, someone would lose one...and probably a foot.

For the historically unaware, Estonia was seized and occupied by the Soviet Union, becoming part of the Iron Curtain so many of us grew up fearing, patriotically, as the Devil. In the early ’70‘s, Jan was conscripted into the Soviet army under Brezhnev, but he was no Communist; he hated the Soviets. Since we were each propagandized to be old enemies, I was fascinated and hoped for my first chance to reconcile Cold War fact with its abundance of fiction. But, that would have to wait a night...until we toasted Estonian Independence Day with a large, fitting amount of Vodka!

Climbing tequila-buzzed into the bivy, I saw that, since leaving Marci’s, life in Mexico started on a remarkable and extended upswing. That would only intensify; I had embarked on what would prove to be my most memorable days in Mexico.

*The UN and Amnesty International: "There is nothing culturally redeeming about/exported from Canada or Iceland. Celine Dion and Bjork may, in fact, be classified as crimes against humanity and COULD justify invading Iraq and/or Afghanistan."-Classified Joint Internal Report , submitted to President George W. Bush 8/15/00, obtained by Wikileaks 2010